Millions of patients are missing out on vital checks for cardiovascular disease and diabetes as PCTs are failing to hit government targets, a GP investigation has found.

Two thirds (64%) of PCTs in England did not provide enough NHS health checks in 2011/12 to meet the full programme's target number, according to 118 trusts responding to a Freedom of Information Act request. A fifth (21%) admitted they will fail mandatory DH targets for 2012/13 despite being given three years to prepare. 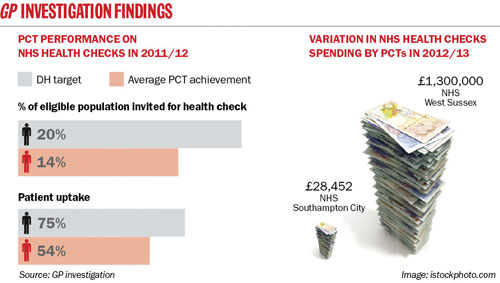 Unless provision and uptake improve, 9m patients are likely to miss out. GPs and health charities said the failure to prioritise the programme was ‘unacceptable’ and could cost the NHS billions of pounds.

The NHS health check programme aims to screen 15m people aged 40-74 for risk of heart disease, diabetes, kidney disease and stroke by 2018. PCTs were given three years to begin a phased roll-out before the programme launched in 2012.

GP surgeries, pharmacies and other providers are providing the checks, including BMI and blood cholesterol tests. From April, PCTs must screen a minimum of 20% of eligible people per year.

But a significant postcode lottery exists between areas of England as the full programme of checks gets under way.

Three PCTs did not provide a single check in 2011/12, with another providing just four. A spokeswoman for NHS Cornwall and Isles of Scilly said checks were not prioritised ‘owing to other pressures’.

Despite government funding, six PCTs spent nothing on the programme in 2011/12. GPC deputy chairman Dr Richard Vautrey said: ‘The programme is done in such an ad hoc way, without central guidance. That’s why it is so patchy in uptake and, probably, effectiveness.’

Baroness Barbara Young, chief executive of Diabetes UK, told GP that vascular checks were ‘fundamental’ to tackling rising levels of diabetes and the £8bn cost of complications. She added that efforts to encourage people to attend checks had fallen short.

Jules Payne, chief executive of Heart UK, said: ‘This has all the classic ingredients of health inequalities and a postcode lottery for accessing services.’ A DH spokesman said PCT performance against the targets would be monitored.

Doctors' leaders have accused the Labour party of 'demonising' GPs after it claimed...