Over 60% of GP partners plan to cut their practice's use of locum GPs in the next year, and half could reduce their own pay to keep their practices sustainable.

In a GPonline poll of 217 partners 61% said their practice would consider reducing the use of locums in the coming year to maintain profits or sustainability. Just under half (47%) will consider cutting their own take home pay.

Over a third (35%) of partners said they would consider reducing patient services, while a fifth said they could freeze staff pay. More than one in 10 respondents said they may have to consider staff redundancies.

Practices are considering the drastic measures despite evidence from official data last week that GP funding rose by 3% in real terms across the UK in 2016/17. 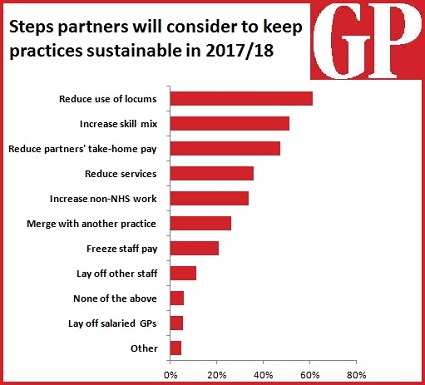 GP leaders said that despite increased funding secured by the BMA in contract negotiations practices across the country were still ‘struggling to cope with rising patient demand that is far outstripping current resources’. The GPC is calling on the government to speed up promised additional investment, and has warned that current projections suggest the profession will remain £3.4bn short of the funding it needs by the end of the decade.

One GP partner said: ‘I think most practices are only one GP away from a crisis - whether that be retirement or illness. We have spent a fortune on locums and are limited when we take annual leave.’

Another added: ‘Core services not enough to sustain profitability. Additional services commissioned by the CCG are needed but they are now being devious by linking these additional services to work not wanted by practices like poorly funded extended hours work. You have to do all or nothing. This is an underhand way of making practices do work that they do not want to do and is non-profitable.’

But another GP said: ‘I am ever optimistic that we will make it work for the future.’

NHS England has suggested salaried GPs are likely to receive a 2.1% pay rise from...

General practice risks missing out on millions of pounds in funding this year because...

GP leaders have rejected 'insulting' proposed changes to the GP contract for 2023/23,...

Podcast: Why underdoctored areas face a vicious cycle and how NHS plans could hit GP workload

The team discusses our new GP Insight tool and what it tells us about the GP workforce...

GP partners in decline in almost every part of England

GP partners are in decline in almost every part of England - with the proportion...

Half of GPs have cut working hours to ease workload, poll shows

More than half of GPs have reduced their working hours because of intense workload...