Medical indemnity fees have ballooned in recent years, with one in three GPs paying 20% more now to maintain legal cover than they did five years ago, according to a GPonline survey.

The overwhelming majority (88%) of GPs said their medical indemnity fees had increased over the past five years, with many warning fees are rising ‘significantly more than pay’. 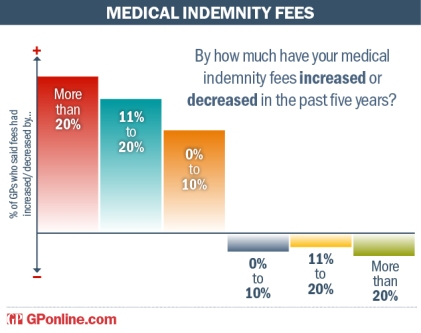 Just one fifth of the profession working full time receive quotes under £5,000 a year.

The results follow warnings made in May at this year’s LMC conference, in which GP leaders revealed soaring medical indemnity costs were forcing GPs out of the profession as it became ‘uneconomic’ to continue providing services.

LMCs called for the government to start directly reimbursing indemnity cover and for the GPC to consider the pros and cons of crown indemnity cover - already in place for hospital workers - being extended to GPs.

The issue was also raised by GPs at this year's NHS Confederation conference, prompting NHS England chief executive Simon Stevens to pledge personally to investigate the mounting cost of fees.

In answers to the GPonline survey, many respondents warned that the ‘atrocious hikes’ in fees were further compounding GP workforce problems.

One GP respondent said they wanted to ‘retire gradually’, but indemnity costs made this impossible, because they were ‘not truly pro-rata’.

Another said the costs were ‘driving me towards early retirement’, while one warned that the climbing costs were ‘off-putting to those coming in’.

One GP said: ‘It is becoming not financially viable to do this job with tax and pension contributions as well. My monthly indemnity fees are the equivalent to a mortgage payment.’

Several GPs called out the ‘unfairness’ of their fees taking a leap when they made the switch from being a retainer GP to salaried.

‘When I changed from retainer to salaried GP I was doing exactly the same job and the same hours, but my insurance jumped a huge leap,’ said one.

Medical defence organisations have previously told GPonline it was ‘inevitable’ that subscription costs had to rise against a backdrop of soaring costs for clinical negligence claims.

‘We have an obligation to ensure that we collect sufficient subscription income to meet the expected future costs of claims against members,’ a spokesman for one defence group said.

The rising rates of insurance ‘are not covered’ by the measly 1% GP pay increase recommended by the DDRB, he added.

‘There ought to be the same systems they have in other countries of either no fault compensation or crown indemnity.’

The government set out plans this week to put a £100,000 cap on the ‘excessive’ clinical negligence legal fees charged by lawyers. Implementing this limit may help curb costs, according to medical defence groups.

GP-led sites delivering COVID-19 vaccination have been told to start rollout of jabs...