More than 80% of CCGs in England restrict access to surgery and treatments based on patients' BMI, and at least one blocks all routine surgery for obese patients unless they lose weight.

A GP investigation found the overwhelming majority (83%) of CCGs deny patients treatment for infertility, joint replacements and aesthetic surgery if their BMI is considered too high.

Almost two-thirds (62%) will not allow patients to receive certain treatments based on their smoking status.

GPC deputy chairman Dr Richard Vautrey condemned the ‘rationing of services’ as unfair, unethical and unacceptable. He said CCGs hid behind ‘spurious clinical reasons’ to discriminate against some groups to cut costs.

The results come just months after Northern, Eastern and Western Devon CCG was forced to back down following an outcry over plans for a blanket ban on routine surgery for any patient with a BMI >35.

But GP can reveal that at least one CCG still imposes similar restrictions. Herts Valleys CCG blocks routine surgery for all morbidly obese patients with a BMI >35.

The GP investigation, based on Freedom of Information Act responses from 145 CCGs, shows that many more set restrictions, potentially leaving patients struggling with painful conditions. The BMI cut-off points imposed by CCGs for access to treatment varied widely across England. 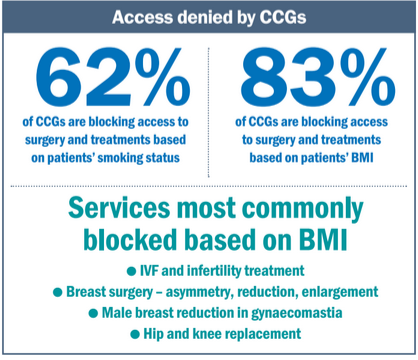 The vast majority of CCGs will not allow female patients to have breast surgery or males to have breast reduction for gynaecomastia, based on their BMI. Many have clamped down on fertility treatments and assisted conception for patients with a high BMI.

Southport and Formby CCG and some CCGs in central and west London said they would not allow patients with a BMI >30 to have hair removal treatments for hirsutism.

One CCG said: ‘Given the limited resources available in the NHS, the CCG considered it would not be appropriate for some treatments to be routinely available to all patients.’

Another said it applied restrictions to ‘ensure that limited resources available to the CCG are applied to those with most health need’.

Dr David Haslam, an obesity GPSI, said: ‘What we hate as GPs is blanket bans and you can’t just take BMI as a reason to operate or not operate.’

Some restrictions could have a sound clinical basis, he said, but it is wrong to turn away patients based on weight and do nothing to help change their circumstances.

‘Weight loss interventions must be offered, otherwise it’s immoral and unethical,’ he said.

Dr Haslam, who practises in Hertfordshire, criticised Herts Valleys CCG’s restrictions on care. ‘I think it shouldn’t be doing it,’ he said.

The area did not do enough to help patients with weight management services or surgery, he added. ‘There’s very little in between Luton and Bedfordshire and Cambridge. They need to get their act together and provide weight loss services.’

Hertfordshire county council’s director of public health, Jim McManus, told GP: ‘We recognise that some people who are overweight or obese need additional support to achieve a healthy weight so we also have targeted programmes in place to help them achieve this.

‘These include a successful weight management on referral scheme which provides 12 free Slimming World or Weight Watchers sessions for those who meet certain criteria and a men’s weight management scheme, in partnership with Watford Football Club Community Sport and Education Trust.’

A spokesman for Herts Valleys CCG said it implemented policy to make sure that ‘patients are in the best possible health before they have their operation’.

‘These measures are for people who need routine (planned) surgery only. They do not apply when people need urgent or emergency surgery such as to treat cancer,’ he added. ‘For the majority of patients affected, the policy means that they will still have the surgery, but will undergo their procedure when they are healthier.’

More than 100 CCGs would only allow non-smokers to access fertility treatments and IVF. Many said their decision was underpinned by NICE guidance, but the guidance only recommends patients ‘should be informed that smoking is likely to reduce their fertility’, not that they should be denied treatment.

‘It’s blatant rationing,’ said Dr Vautrey. ‘CCGs should be open and honest. If we’re going to ration a service we should ration it for all people, not just those in particular groups and pretend it’s for clinical reasons.

‘If it’s purely down to cost saving,  it’s not ethical. There are clearly cases where certain people’s body size may make it difficult to safely do a certain procedure, but they’re exceptional. I think what’s happening here is overt rationing to save money.

Viewpoint: Patients and GPs are unhappy with access to general practice, what's the solution?

Practices are deluged with work, yet many people still think they are ‘closed’. The...