Labour is the party GPs are most likely to vote for at next month's general election, according to a GPonline poll that reveals a sharp drop in support for the Conservatives since 2015.

Labour is the clear favourite among GPs ahead of the 8 June general election, with 30% of 600 GP respondents saying they will vote for the party, ahead of the Conservatives on 23%.

Findings from the GPonline poll reveal a significant shift away from the Conservative Party among GPs. Among 222 GP respondents who voted Tory at the 2015 general election, just 52% plan to do so again this time.

A total of 14% of all GP respondents now plan to vote for the Liberal Democrats, while the Green Party has the backing of 3% of GPs, 2% are voting for the Scottish National Party (SNP), just over 0.5% are supporting Plaid Cymru, and less than 0.5% back Ukip.

Asked which political party they believed was most likely to protect the NHS, 47% of GPs chose the Labour Party, while 13% said the Liberal Democrats, and just 9% opted for the Conservatives.

Overall, a significant 20% of GPs remain undecided about which way to vote next month, the poll found, and a further 4% do not plan to vote. Excluding undecided voters from the results, 38% of GPs plan to vote Labour on 8 June, with 29% planning to back the Conservatives and 17% choosing to vote Liberal Democrat. The next most popular party is the Greens on 4%. 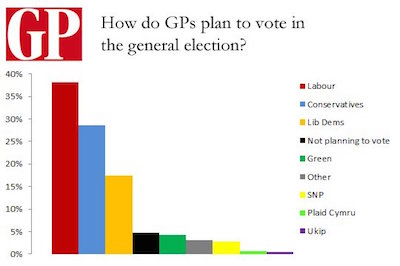 (The graph above excludes GPs who are undecided)

This represents a significant change from the 2015 general election, when 38% of GP respondents voted Conservative, 27% Labour, 15% Liberal Democrat, and the rest for other parties.

The swing to Labour was reflected in comments from respondents who said that the Labour manifesto showed the party was committed to the NHS, and that Labour's 'policy and ideals, honesty and relative freedom from posturing' were welcome.

But many comments posted by GP respondents to the poll suggested that they are disillusioned with political parties across the board.

One GP said: 'Fed up of elections and waste of our money. No matter who you vote for, they will not help NHS.'

Another respondent warned: 'Having worked in NHS 25 years I can tell you it makes no difference which party is in power, they all promise the Earth but persistently fail to deliver.'

Another said: 'None seem willing to address the problems of impossible demands and impossibility of adequate funding from direct taxation,' while at least two respondents said the NHS should be taken out of party political control and handed over to an organisation led by a cross-party group of MPs.

Some GPs spoke of being alienated from the Conservatives by Jeremy Hunt, or from the Labour Party by Jeremy Corbyn.

Many respondents said they did not trust the Conservatives with the NHS, but several also said that although they felt the NHS was safe with Labour they were concerned about how the party would manage the economy, or that its promises were unrealistic.

Labour peer Lord Philip Hunt told GPonline this month that the party would outspend its rivals on the NHS - a pledge borne out in our comparison of manifesto pledges.

However, two leading think tanks have warned that no political party is offering enough money for the NHS.

GPs delivered a huge increase in face-to-face appointments in the week before NHS...

The RCGP is facing legal action over its decision to remain opposed to assisted dying...

GP practices have faced a wave of abuse and complaints after a letter from NHS England...

The government has denied plans to make GPs 'gatekeepers' of the struggling COVID-19...