Three in five GPs have been forced to cut the number of sessions they work or turn down extra sessions because of indemnity costs - potentially costing the NHS the equivalent of more than 2,500 full-time GPs, a GPonline survey suggests.

The findings reveal the huge dent created in the GP workforce as indemnity costs continue to surge. Almost 100,000 working hours a week would be stripped from the NHS - equivalent to more than 2,500 GPs working 37.5 hours - if three fifths of the 41,475 headcount GPs in England cut just one session from their weekly schedule.

The GPonline poll of over 460 GPs found that the majority are cutting down on sessions and turning down work due to unsustainable indemnity costs.

Some 58% of GP respondents said they had cut back on or turned away further work. The GPC said it was ‘unacceptable’ that such a large proportion of GPs are having to decide where and how often they work based on the financial implications.

Over a third (35%) of GPs said they been forced to turn down out-of-hours work as a direct result of indemnity costs and restrictions on sessions covered.

More than a quarter (28%) said they had been forced to turn down in-hours work for the same reason, with half (49%) overall reporting that they had turned down sessions either in- or out-of-hours.

Many more have actively reduced the number of sessions they work because of rising indemnity costs, with as many as two in five (39%) revealing they had taken this step.

A further 19% indicated they were ‘considering’ reducing their sessions because of high indemnity costs.

There are fears that the situation is making workforce problems worse, with many able GPs frozen out of working extra shifts that they are willing to work. 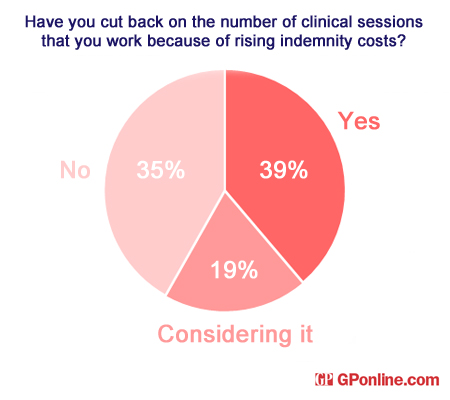 ‘Spiralling costs mean I am actually working less, as increasing the amount of work done won't make up for the cost of indemnity,’ said one GP.

Another said they only worked five sessions a week – with one essentially being done for free, as their indemnity costs account for a fifth of their total wage.

Many recently retired full-time GPs said indemnity costs meant it was ‘not financially viable’ to do one or two sessions a week as they had originally hoped to do.

One respondent said: ‘I have chosen to limit myself to two clinical sessions a week – however, after GMC, indemnity, chambers fees and tax I make virtually no money from clinical work. I will aim to stop very soon.’

Another said: ‘I cut back to four sessions a week, with additional income from teaching. I am really bothered about how much I can work and how much it costs – my income is really quite low after all the costs of memberships, indemnity and fees.’

Read more: Indemnity crisis has pushed GPs to the brink of collapse

MDOs have said they are deeply concerned about the impact of indemnity on GPs, and have called for legislative change to tackle the problem. They recently said government proposals to cap legal fees for low-cost complaints do not go far enough to sort the problem.

‘Many are having to decide where they work based on the potential financial implications or how many clinical sessions they undertake. This is not only an unacceptable predicament for GPs, but is also adding to the stress on GP services which are buckling under pressure from rising demand, flat lining budgets and endemic GP shortages in some parts of the country.

‘In all four nations the BMA is working very hard to ensure the message is getting through to ministers that this situation cannot be allowed to continue. We now need to see a robust solution urgently put in place and we are pressing for a new approach to be implemented as soon as possible.’