GPs in parts of England are dealing with twice as many patients as their counterparts in other areas, an analysis of official data by GP magazine reveals.

But in NHS Gateshead CCG, there are just 1,167 patients for each of the area's 177 full-time equivalent GPs. Variation between individual GP practices is likely to be significantly greater, but the figures reveal the extent of regional variation in GP-patient ratios. 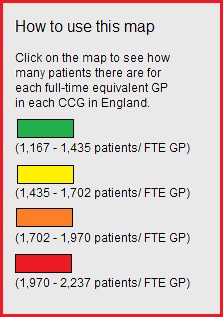 The findings come from a combination of GP workforce census data published in early 2014 and October data on patient populations from the Health and Social Care Information Centre.

GPC deputy chairman Dr Richard Vautrey told GP that wide variations in numbers of GPs per patient across the country showed how hard it was to recruit GPs in some areas.

'There is a historical variation that has always been the case – there is a big issue with many areas struggling to recruit GPs,' said Dr Vautrey.

GP magazine reported earlier this year that a third of practices had at least one GP vacancy, and that one in six of these had been unable to fill a post for more than a year. Leeds LMC, where Dr Vautrey is assistant medical secretary, reported this month that half of practices in the city had a GP vacancy.

He added: 'There are also many areas where they have a relatively higher proportion of GPs, but may be serving a deprived population and still be underdoctored. You can’t assume that every CCG should have the same number of GPs per patient.'

Dr Vautrey said the NHS had done more in the past to analyse GP numbers in different areas and to encourage GPs to fill gaps in provision, but that it had become 'hard to tackle variation' in recent years because the NHS has 'not had the same level of workforce planning'.

Health Education England has set out plans to drive up the number of full-time equivalent GPs by 15% by 2020. Its officials admitted the NHS may be forced to recruit more GPs from overseas, increase incentives for existing GPs to retire later and offer incentives to tempt doctors back after career breaks.

NHS England has appointed GP and academic Professor Martin Roland to lead a workforce review that will report in June 2015 on how reforms planned by NHS England will affect GPs' roles, and the number of GPs needed in the future NHS.