Half of practices have seen at least one GP retire or emigrate within the past 12 months, according to a GPonline poll that sheds new light on the primary care workforce crisis.

A total of 49% of 284 respondents to the survey reported losing at least one GP to retirement or emigration over the last year.

Just weeks after a landmark report from a GP workforce commission led by Professor Martin Roland called for wider use of skill mix in primary care, the survey shows the extent to which the government faces a race against time to recruit new GPs. 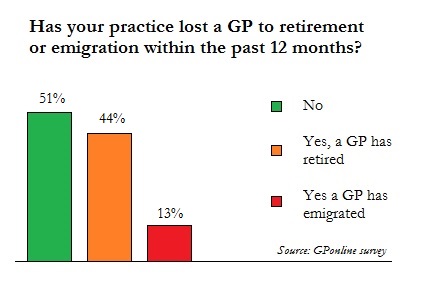 Health secretary Jeremy Hunt admitted after the 2015 general election that the government's target of adding 5,000 new GPs to the workforce by the end of the parliament was the maximum that could be achieved.

One GP who took part in the survey said: 'One retirement and one departure for more childcare-friendly hours... Best local candidate as replacement has taken partnership 40 miles away; second best has gone to New Zealand, at least for a while.'

Others reported early retirements or departures overseas, often due to soaring workload and falling income. One GP said: 'I've emigrated. Less stress, better pay, why the heck should I want to come back?'

The GPonline survey also found that the exodus of GPs from UK general practice was set to continue, with 40% of GPs reporting that they expect a GP at their practice to retire in the next 12 months, and 7% saying they expect a GP to emigrate in that period.

GP leaders have warned that new GPs are simply not being trained fast enough to replace doctors heading abroad or retiring. Health Education England has been forced to run a third round of recruitment to GP trainee posts after just 80% were filled across the UK after two rounds.