More than half of GP partners could reduce their take-home pay over the next year to help their practice survive, a GPonline poll suggests.

Cutting partners' drawings is the measure GPs and practice managers are most likely to be considering to keep their practice afloat as the GP crisis continues to affect the profession, the GPonline poll found.

Just over half (52%) were considering reducing partners' pay in the coming year, while 50% said they would aim to reduce their use of locum GPs. 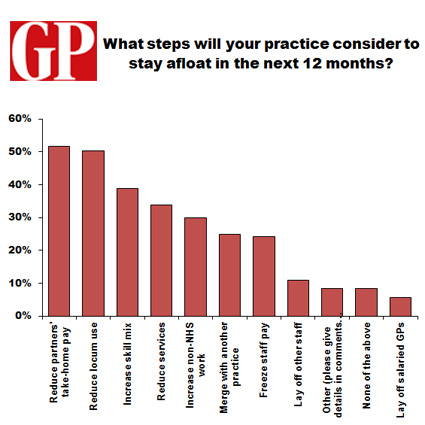 The findings come as part of a series of issues investigated by GPonline about practice sustainability. On Thursday, GPonline revealed that one in 10 GPs believe their practice is at risk of closure over the coming year because of workload, recruitment or funding problems.

Practice closures are already at record levels, but the demise of one in 10 practices could leave more than 5m patients looking for a new GP.

Pressure on partners to reduce their pay looks set to make the profession increasingly unattractive to new recruits and could accelerate existing GPs' retirement plans. Around one in 10 available GP trainee posts for 2016 are unfilled and BMA polls suggest significant numbers of older GPs are set to retire.

GP partners who took part in the poll said they had been forced to carry out extra tasks to keep their practice going, to cut back on holidays or take other steps, but were often still struggling.

One GP said: 'We have already been forced into changing skill mix following two partners retiring recently and [we are in] negotiations over a possible merger/relocation to new premises over the next five years with other practices. We are in locality with three practices covering a single town/area so should be sustainable but may be different in five years.'

Another said: 'Received significant number of patients following a list dispersal from the closure of a neighbouring practice. [We were forced to] reduce partner holiday.' And that practice was not alone in facing a significant rise in patient numbers. Another GP respondent warned: 'We have three committed partners but the list size has grown 10% a year in the last three years, so we are in trouble because of excessive demand.'

One GP said her practice had taken a series of steps to stay afloat, but partners were too exhausted to take on extra work. 'We have merged, we have already reduced our drawings by 10%. We would take on more non-NHS work but just have no energy or time to do so.'

One GP said partners at his practice were doing 'lots of non-GP jobs ourselves, like admin, flu jab clinic, NHS health check, etc' because they couldn't afford to hire other staff to help.

GPC leaders have urged NHS England to speed up the delivery of funding and support for general practice. GPC deputy chairman Dr Richard Vautrey told GPonline this week that although resources were available, they were not yet getting to core general practice fast enough.