Three out of four GPs say pressure on prescribing budgets has increased over the past year, with many reporting a negative impact on patient care, a GPonline poll has found.

Three quarters of GPs reported that pressure on local prescribing budgets had increased over the past 123 months, according to the poll of over 350 GPs.

GP respondents said they felt they had to ‘prescribe with handcuffs on’ to deal with the pressures, while another said the year would mark ‘the first time ever we will fail to meet our budget’.

Only 2% of over 350 GP respondents said pressure on their prescribing budget had decreased since April 2015. A quarter said pressure had neither increased nor decreased.

Dr Andrew Green, chairman of the GPC's clinical and prescribing subcommittee, warned that CCGs –many of which are facing 'significant deficits' – were 'becoming increasingly restrictive' on GP budgets.

This is having knock-on effects on patients as GPs are being directed to change patients from one drug to another, potentially causing them distress and piling extra strain on GP workloads, he added. 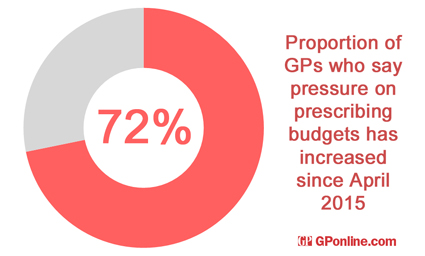 The overall prescribing spend in primary care increased by £414m in 2015, according to Prescription Cost Analysis data from the Health and Social Care Information Centre (HSCIC). This pushed the overall amount spent up to £9.3bn, a rise of 5% on 2014.

GPonline has already reported on the sharp rise in spending on anticoagulant drugs in 2015, which increased by an unprecedented 60% – largely driven by increased demand on GPs to prescribe NOACs over traditional therapies.

One GP said that patients ‘know about NOACs and how convenient they are compared to warfarin’.

Doctors have also reported that hospitals are now opting to give patients NOACs as their first choice of anticoagulant, putting greater strain on GP prescribing budgets when they pick up care of patients further down the line.

Dr Green said: ‘As CCGs face significant deficits, often to fund secondary care, they are becoming increasingly restrictive on primary care prescribing, despite the fact that much expensive prescribing originates from secondary care.

‘This has resulted in patients being changed from one drug to another, sometimes for the saving of only a few pennies a month, or being confused by frequent name changes for branded generics. This inevitably results in increased work for GPs, not only in changing the prescriptions, but also in dealing with the inevitable resulting questions from patients.

‘We have also seen that in some areas access to resources for other aspects of patient care has become dependent on participating in these schemes, some of which ignore the GPs’ contractual requirement to make available to patients treatment that has been recommended on an FP10.’

A social enterprise is helping to train staff in GP practices to support women affected...

GPs remain in the dark over how a stop-gap offer from NHS England to pay off pension...

A group of LMCs has warned it 'cannot recommend' GPs sign up to revised plans for...