Seven out of 10 GPs believe rationing of care has increased since the government's NHS reforms came into force in England, as doctors warned the situation is now 'intolerable and dangerous'.

A GP survey found 71% of 315 GPs believe local rationing of treatments or services in their area has increased since April 2013.

GP leaders warned that cuts to local services were damaging patient care. This follows a series of reports in the past year on the extent of care rationing at a time of increasing financial pressure on the NHS.

Some CCGs hope to reverse rationing policies inherited from PCTs once they achieve financial balance. But this may prove difficult, with one in eight CCGs predicted to be in deficit by April 2014.

GPs responding to the survey said rationing of local care had increased ‘significantly’ in the past nine months. One GP partner in England said: ‘We have huge cost pressures and this is resulting in increased rationing and fragmentation of services to reduce costs.’

Another said: ‘This is becoming intolerable and now dangerous.’ 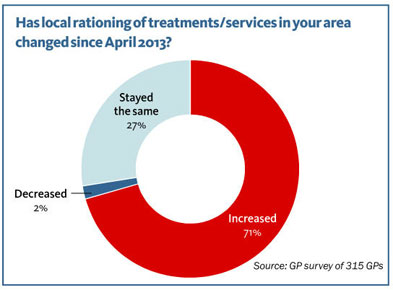 A salaried GP in England said although rationing in their area had stayed the same, greater use of referral management ‘has made life more complex’.

A GP investigation in 2012 found 90% of PCTs had imposed thresholds or limits on treatments including cataract, joint or bariatric surgery.

In March 2013, weeks before CCGs took control of local commissioning, MPs warned the NHS was rationing patients’ access to these procedures to hit efficiency savings targets.

Since then, a BMJ investigation in July 2013 found one in seven CCGs had tightened criteria for referring patients for ‘low clinical value’ treatments in 2013/14.

Now there is fresh evidence that rationing has persisted under CCGs, with IVF continuing to be restricted (see box).

Access to bariatric surgery, routinely restricted by some PCTs, has improved, but patients now face ‘tortuous’ routes to access treatment, according to Hertfordshire GP Dr David Haslam, chairman of the National Obesity Forum.

He said the new national specialised commissioning policy from NHS England had improved overall access to bariatric surgery by following NICE guidelines on BMI eligibility. But patients are now expected to attend local specialist weight-loss programmes for more than a year before surgery can be considered. Dr Haslam said patients with severe obesity should be exempt so they can undergo the procedure sooner.

‘It’s one of the most clinically and cost-effective procedures in any field. The simplest way of putting it is if someone’s diabetes resolves [after surgery], they come off medication and save the NHS a fortune.’

GPC deputy chairman Dr Richard Vautrey said the warnings raised in the survey reflected the experiences of most GPs in England. ‘The NHS is under clear financial pressure and GPs are well placed to see the signs. Many are concerned about reduced engagement with community nursing and reduced or delayed access to psychological services, which is having an impact on patient care.’

A spokeswoman for NHS England said: ‘Health service budgets have been protected and NHS England, through its mandate, is ensuring patients receive the services they need.’