Less than a quarter of GPs think the NHS should offer 'MOT-style' health screening and one in 10 will refuse to offer the checks this year, a GP survey suggests.

Our poll found only 22% of 517 GPs in England back the NHS Health Check programme, which screens  40 to 74-year-olds for their risk of diabetes and vascular diseases.

Just 10% said there was sufficient evidence to support the scheme, while one in 10 GPs (9%) said they would pull out of offering the checks in 2013/14.

The findings are a setback to Public Health England (PHE)’s bid to engage more GPs in the programme, which it relaunched last month.

At the time, Professor Kevin Fenton, PHE director of health and wellbeing, told GP the organisation would work with local authorities to convince GPs of the programme’s value. PHE wants to ‘mobilise’ GP practices and other providers to offer 15m checks over five years.

This follows years of slow and patchy roll-out of the scheme by PCTs after it launched in 2009. A recent GP investigation found 1m patients ignored a GP’s letter inviting them for a health check in 2012 (GP, 15 April 2013). 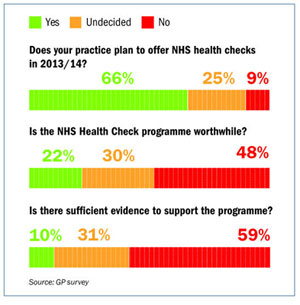 GPs responding to the survey said too little remuneration was offered to provide the checks.

‘We offered them before and found it too much work for the payment and, as [it was] taking up too much time, we stopped,’ said one GP.

Others pointed to the huge workload facing general practice today. One GP said that the programme was a ‘poor use of scarce resources’.

Many GPs in the poll said those patients most at risk often failed to attend the checks anyway.

‘Only the healthy people – especially the worried well – come in for health checks. The people who would actually benefit do not come in for them,’ one respondent said.

Other GPs said the programme was ‘excellent’ and had helped to
diagnose cases of diabetes or hypertension that might otherwise have been missed.

But almost six in 10 GPs who responded said there was insufficient evidence to support the programme. One said: ‘I believe the evidence indicates it is not worthwhile, but this is being ignored by the government.’

Another said: ‘I’m concerned that [it] may direct vital funding away from other treatments and may also affect patient access.’

A Cochrane review published last year found screening to uncover long-term conditions does not save lives or reduce morbidity rates.

However, PHE said the Cochrane study was a ‘poor guide’ to whether the NHS Health Check programme adds to population health. It said the trials considered in the review often bore ‘little relationship’ to approaches taken by the NHS programme.

A spokesman for PHE said: ‘The relevant evidence, with operational experience on the ground, is compelling support for the programme.

‘With a large burden of disease and premature mortality and a clear narrative to illustrate that early identification can improve outcomes, the lack of scientific certainty should not be a reason for postponing the cost-effective measure of health checks.’

It added that it was establishing a panel to review evidence and
research needs.

Opinion: GP with an interest in cardiovascular disease

Professor Mike Kirby, a locum GP in Hertfordshire with an interest in cardiovascular disease, said screening should target those at higher risk of diabetes and vascular disease first, rather than the whole population aged 40-74. ‘Detecting and acting on pre-diabetes is very cost effective,’ he said.

But he said GPs should not be asked to offer checks as most are ‘limited by space and time. The work can be done in the community, commissioned by CCGs, but the data must reside with GPs.’

GP training: Preparing for an interview

The mandatory COVID-19 vaccine deadline for NHS staff should be delayed amid indications...

Doctors have called for rapid rollout of respiratory protective equipment (RPE) to...

Patients from a GP surgery in Cornwall have curated an art exhibition at a leading...