Practices have been forced to lay off salaried GPs and other staff, cut use of locums and reduce services in the past 12 months as profits slumped, an exclusive GP survey shows.

Take-home pay fell over the past year for 65% of 309 UK GPs who responded to the poll.

Among partners, 80% reported a fall in take-home pay. Almost 40% of respondents said their practice was now no better off than it was before the 2004 GMS contract took effect.

The poll shows practices already face sharp losses as the government prepares to impose sweeping contract changes that will slash six-figure sums from some practices' income.

GPC leaders have warned that the deal will bring the biggest pay cut for almost a decade, with MPIG top-ups to core pay axed over seven years, and the biggest-ever overhaul of QOF. 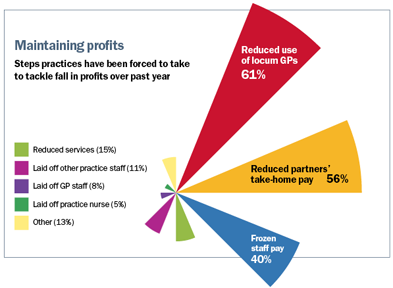 GPC deputy chairman Dr Richard Vautrey said falling take-home pay was having a devastating impact on GP morale. 'GPs are working harder than ever and they don't believe they are appreciated for that,' he said.

The 1.5% funding increase offered by the government in return for a significant increase in workload would 'not cover expenses', Dr Vautrey said.

The repeated failure of GP pay deals in recent years to match rising expenses is to blame for falling take-home pay, accountants said.

Expenses rose 3.5% in 2010/11, according to the latest available pay data for GPs, a trend the GPC says has continued.

Russell Finn, of specialist medical accountants Ramsay Brown & Partners, said: 'It's becoming a choice between quality and resources. A lot of practices cannot afford to provide a top-quality service.'

This was borne out by the poll, which found 15% of practices had cut services in the past year. The most common step to maintain profits was to reduce use of locum GPs, with 61% doing this in 2011/12. 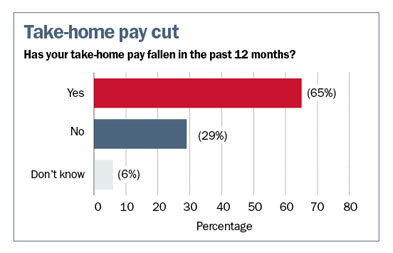 She said locums could be forced to cut their fees to compete for work. Just over a third of locums reported a drop in income over the past year.

Practices have also been forced to cut staff, reduce partners' pay and freeze staff pay. They were almost twice as likely to cut salaried GPs as nurses, with 8% reporting they had laid off GP staff, compared with 5% for nurses. A total of 56% of practices had cut partners' take-home pay, and 40% said they froze staff pay.