GPs increasingly have to fight to obtain NHS treatment for their patients as managers raise the limits on access to care, a GP investigation has found.

GPs make IFRs on behalf of individual patients to gain access to treatments that PCTs deem 'non-urgent' or of 'low clinical value'.

GPC negotiator Dr Chaand Nagpaul said the requests took a huge amount of time for PCTs and GPs, and unfairly forced practices to explain to patients why requests had been rejected.

'If the requests are being accepted, it suggests there is bureaucracy in this approach and it's simply not fit for its purpose. It is not a fair use of GPs' time to be having to provide explanations for decisions reached by other parts of the NHS,' he said. 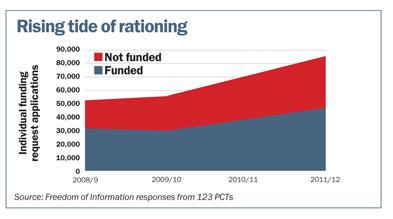 Suffolk LMC wants commissioners to address IFR responses directly to patients. Its chief executive, Geoff Reason, told GP: 'This ought to be public and transparent. If they're not going to fund things, they need to say, "Dear public, we can no longer offer these services.".'

Steve Winyard, head of policy and campaigns at the RNIB (Royal National Institute of Blind People) said IFRs were being used to restrict access to treatments that would previously have been funded.

'We believe PCTs are using IFRs to put tight restrictions on access to a treatment, but without being seen to put a blanket ban in place,' he said.

Dr Russell Walshaw, chief executive of the Humberside Group of LMCs, said the IFR process could work well, if driven by clinicians. 'IFRs are a good way of doing it as long as people looking at the referrals understand how general practice and specialist care work,' he said.

Northumberland LMC secretary Dr Jane Lothian said a clear and transparent process had been developed in her area, allowing GPs to use an online system to walk patients through the restriction criteria.