Three quarters of GPs do not believe the 2014/15 contract deal will reduce their workload, a GP survey reveals.

Almost half are considering opting out of the unplanned admissions DES agreed for 2014/15 – worth about £20,000 per average practice – amid fears it will consume huge amounts of practice time.

The findings suggest GPs remain unconvinced by a deal hailed as a breakthrough by GP leaders and the DH after the imposed 2013/14 contract was blamed for a sharp rise in practice workload.

Under the 2014/15 contract deal, 38% of the QOF will be removed to reduce bureaucracy – but a third of GPs now believe the performance-related pay framework should be scrapped. Of 328 GPs responding to the poll, just 24% said the potential loss of up to £10,000 in practice income from the transfer of QOF points into core pay was not a price worth paying for freeing up staff time and more predictable funding.

Many GPs are concerned about the growing divide between practice contracts across the UK, after this year’s negotiations became the first to be conducted almost entirely independently for each UK nation.

A total of 64% of GPs said the GP contract should be identical UK-wide, while 82% of respondents warned that talks on separate deals for each part of the UK weakened the position of BMA negotiators. 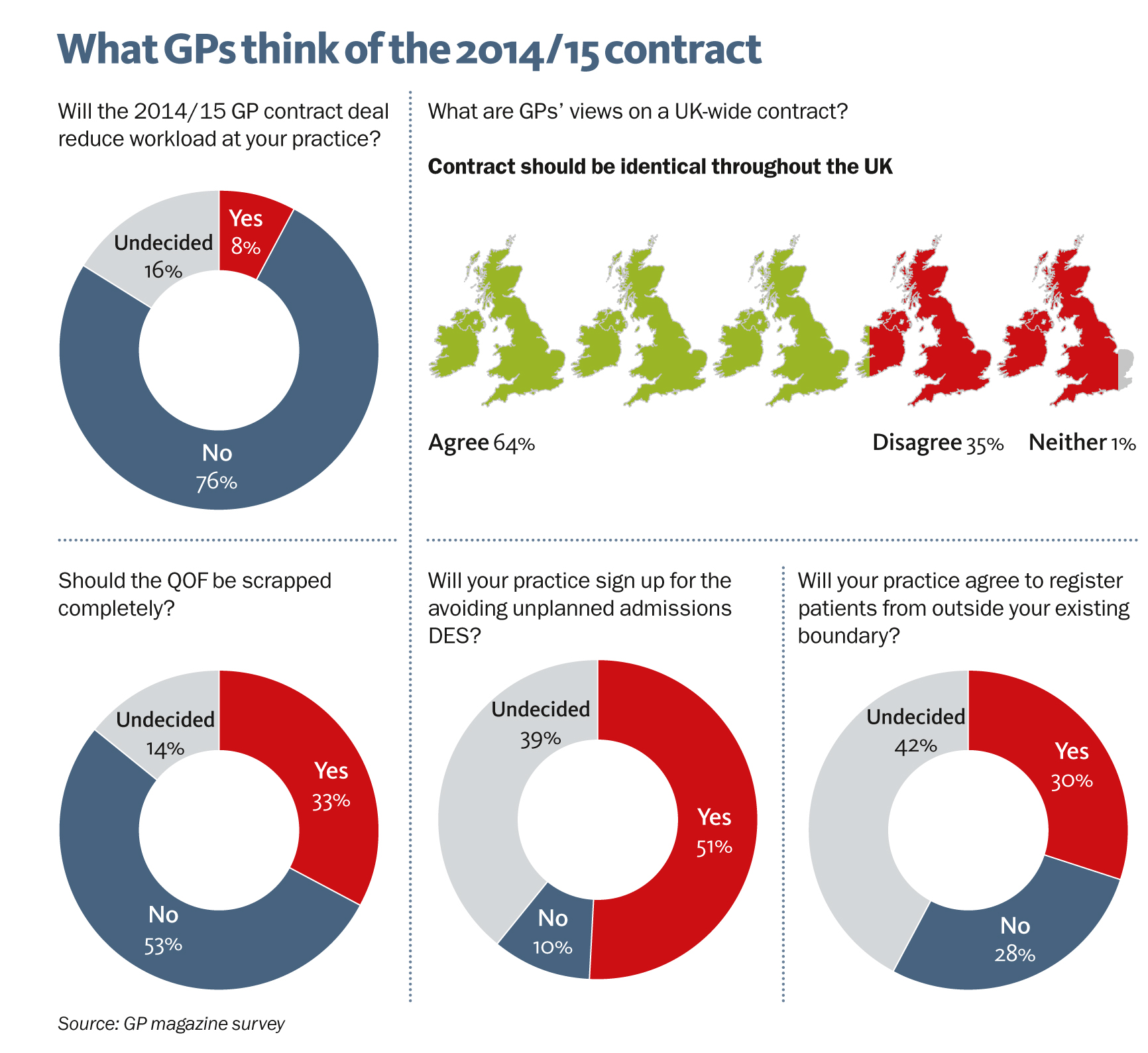 Uptake for a patient choice DES taking effect from April may also be limited, with just 30% of GPs reporting that their practice will sign up.

The DES will allow patients to register at a practice away from where they live, but potentially nearer where they work.

Despite low levels of interest from practices, the 30% figure could be considered a success given that in parts of England, a pilot scheme last year struggled to attract any practices or patients willing to participate.

One London GP said: ‘Being a named GP for over-75-year-olds will increase workload, and the QOF standards will still be expected, but we won’t get payment for this.

‘Anything that states bureaucracy will be reduced seems to come with a new raft of forms to submit.’

A Manchester GP wrote: ‘Yet again we are going to do more for less and even though we are told not to do activity that is not commissioned, we have to for our patients, even when hospitals fail to deliver what they are actually funded for.’

GPC chairman Dr Chaand Nagpaul said the GP contract could not address all factors that drive up practice workload. But he said the deal would help GPs ‘focus on work that is clinically more appropriate’. Dr Nagpaul said the changes would remove ‘highly demotivating’ box-ticking work that GPs have been forced to do and would reduce bureaucracy.

Viewpoint: GPs will be there for patients this winter, but at what cost?

Rising to new challenges is in GPs' DNA and the profession has not let patients down...

The red flag symptoms that indicate potentially serious causes of diarrhoea in adults.

GPs to be told 'shortly' how they can reclaim PPE costs

Information on how practices will be reimbursed for PPE costs incurred during the...

GP leaders have accused the government of 'behaving as if the second wave is an unexpected...