Practices will struggle to cope with patient demand this winter because of a 'relentless' rise in workload and a lack of primary care investment, GP leaders have warned.

Practices are saturated with work after this year’s imposed GP contract and may be unable to absorb the usual seasonal rise in work, the GPC said.

This year’s QOF pushes practices to hold annual reviews in the busiest months of the year and may force GPs to choose between meeting demand and maintaining income, it said.

GP leaders called for extra funding for general practice ahead of next winter, when GPs will take on new elderly care responsibilities under the 2014/15 GP contract.

Most of the £400m funding injection for this winter will be used to relieve pressure on A&E units (see box). Some CCGs are commissioning practices to open for longer, but those in other areas have seen no extra funding.

Last month, the RCGP warned that patients face longer waiting times to see a GP this winter because of a £10bn funding gap in primary care.

The ageing population and a ‘relentless’ rise in care moving out of hospital would add to GPs’ already high seasonal workload, he argued.

‘Practices will be under considerable pressure in winter. The DH needs to recognise that general practice won’t be able to absorb extra activity, because it is already at capacity and in many cases, above capacity,’ he said. 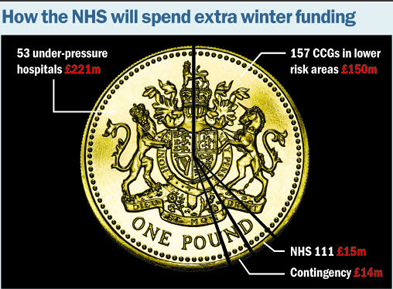 The DH-imposed GP contract for 2013/14 shortened the timeframe in QOF for annual reviews from 15 to 12 months. Dr Nagpaul said this would add further pressure to the usual burden of QOF coding work in the first months of 2014.

‘The worry is that GPs will be diverted to focusing on QOF achievement. On the back of pay decreases in recent years, GPs are understandably trying to manage their finances.’

He urged CCGs to use their share of the £400m winter funding ‘to resource the whole system, not just downstream at the hospital end’.

Dr Nagpaul added that the success of plans to give vulnerable and elderly patients a named GP by next winter would be ‘predicated on providing capacity in general practice for community services to provide that personalised, proactive care’.

Londonwide LMCs chief executive Dr Michelle Drage said politicians are ‘throwing cash at A&E’ as a sticking plaster to shore up the NHS until the spring. ‘It’s not solving the problem, which is investment in primary care.’

Liverpool CCG will invest £1.8m in additional GP surgeries at weekends, extra receptionists for busy periods and more GP visits to care and nursing homes. But provision of such initiatives across England is patchy.

Dr Fay Wilson, chief executive and group medical director at Badger, an out-of-hours provider in the Midlands, said it had received no extra funding this winter.

Constant warnings about pressure on A&E this winter were ‘political hype’. ‘It’s being sensationalised so when things don’t collapse, they can say how well they’re doing,’ she said. Meanwhile, GP practices face ‘more of the same’ pressures without sufficient investment.

She added: ‘The fact is, the population is getting older, GP funding as a share of national funding is going down, and other things GPs are asked to do is going up.’

Research released by the RCGP last month revealed an 8.3% fall in real-terms funding for general practice between 2005/6 and 2010/11, while overall NHS funding rose by 18%.

GP crisis could force one in four practices to close, says RCGP

Unmanageable pressure could force more than a quarter of GP practices to close, polling...

Vaccination in pregnancy cuts COVID-19 risk for mother and baby

Vaccination against COVID-19 during pregnancy reduces the risk of infection and hospitalisation...

GPs could prescribe CBT-based digital games, videos and quizzes for children and...

The BMA has updated its guidance for GPs on firearms licensing following the release...