GP practices say their ability to protect staff is being undermined by a lack of early warning about potentially high-risk violent patients and poor support from NHS officials.

A GP survey of 610 GPs found 79% have felt threatened by a patient in their practice at some point in their career, and more than a quarter in the past year.

One respondent said a new patient with a history of violence had stabbed a GP in the neck. Another said a patient threatened staff with a replica gun, while another GP said a violent patient broke his jaw. 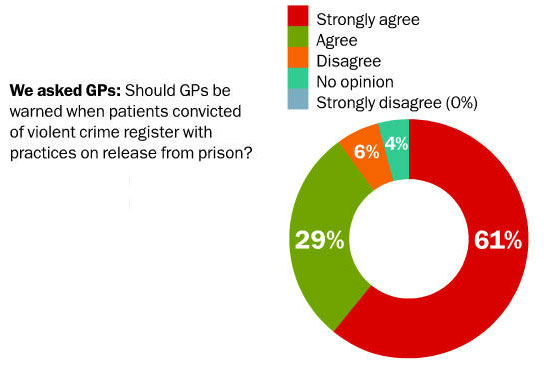 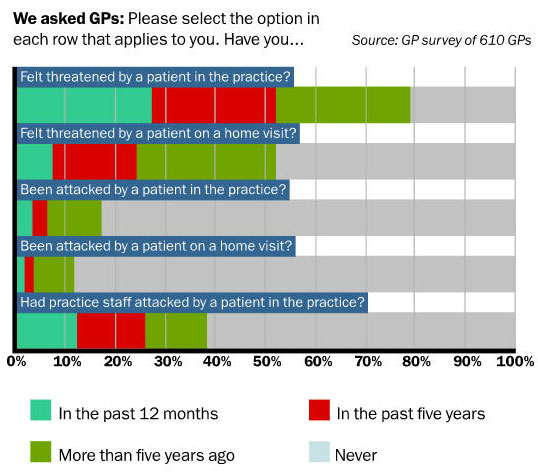 An overwhelming 90% of GPs responding to the poll said practices should be warned when patients with a criminal record of violent offences register at a surgery.

LMCs have called for support from NHS management, warning of ‘bruising experiences’ practices have faced when trying to remove violent patients from their list.

GP leaders at this year’s UK LMCs conference warned that a zero tolerance pledge on violence against NHS staff had been forgotten. GPC deputy chairman Dr Richard Vautrey said it was important for violent patient schemes to be easily accessible.

‘There must be proper resources available and easily accessible violent patient schemes in every area, so those particularly difficult patients can receive appropriate care with the right level of support and protection for the individual who is providing that care,’ he said.

GPs do not currently have to be informed when patients with violent histories at other practices register at their practice, nor when they have criminal convictions for violence.

GP leaders say staff may be put at further risk under regulations that mean patients can only be referred to violent patient schemes when they have threatened violence in primary care, even if they have been banned from other healthcare services.

Avon LMC director Dr Mark Corcoran told the LMCs conference that practices need support to deal with ‘vile, vitriolic’ behaviour from a minority of patients, but ‘support is not always forthcoming’.

Dr Corcoran said two practices in his area had ‘very bruising experiences’ with the Parliamentary and Health Service Ombudsman when they tried to remove patients. He said the zero tolerance policy had been forgotten and watered down, and the right to remove patients from practice lists
was being eroded.

Somerset LMC member Dr Berge Balian told the conference a practice in his area had been told a patient was not ‘sufficiently violent’ to warrant removal. The patient was later removed, but allocated to another practice, which was not warned.

GPC council member Dr Robert Morley said: ‘If anyone on the premises fears for their safety, that is grounds for removal under the violent patients provision.’ He urged practices experiencing unfair treatment to report it to the GPC.

Dr Vautrey urged caution over patients released from prison. ‘We need to be very careful not to pre-judge a situation and almost make it impossible for patients to register when their behaviour has been questioned,’ he said.

A spokeswoman for the Parliamentary and Health Service Ombudsman said: ‘Our remit is to investigate fairly and impartially. GP practices, like any organisation we investigate, are given an opportunity to comment on draft reports and decisions affecting them before findings are published.’

GPs must be ready to support patients with physical, psychological and social problems...

The government must scrap its high-risk ‘rule of six’ and introduce more stringent...

The average GP practice list has risen beyond 9,000 patients for the first time after...