Two out of five GPs say the CQC should compensate practices it has publicly labelled 'high risk' if they are later rated 'good' or 'outstanding'.

A leading primary care solicitor told GP that practices had ‘potentially been defamed’ and may be able to claim damages (see box Expert View, below).

The CQC published data from its intelligent monitoring tool last month. The watchdog placed every practice in England in one of six risk bands and published this information online. A total of 1,200 practices were placed in bands 1 or 2, the highest-risk categories, triggering hundreds of negative headlines in national and local media.

But the watchdog has yet to inspect the vast majority of practices and may take more than a year to publish official ratings for some. The risk scores are based on publicly available data from the QOF and other sources, but GPs say the information offers a partial, often unfair picture.

The GPC has called for an apology and a ‘fundamental review’ of the CQC’s risk tool.

Leading GPs believe a proportion of practices labelled high risk by the CQC will be rated outstanding or good after a full inspection, warning that the risk tool relies on data that is often out of date or context.

Wessex LMCs chief executive Dr Nigel Watson said: ‘We cover about 500 practices. The ones in band 1 are not practices I would be concerned about.’

The GP magazine survey of 600 GPs found that 38% believe the CQC should offer financial compensation to practices branded high risk if they are later found to be ‘outstanding’ or ‘good’.

An overwhelming majority say cases such as this should trigger a formal apology from the watchdog and it should be forced to contact patients to explain. One in 10 GP partners said their practice faced negative publicity as a result of the CQC publishing its risk scores. 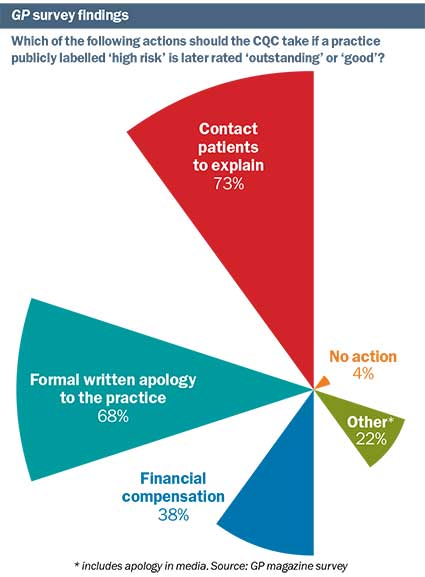 GPC deputy chairman Dr Richard Vautrey said: ‘We have met senior officers at the CQC and made it crystal clear how angry the profession is, and how damaging its actions are.’

However, he warned practices considering legal action it ‘can be very costly’ and BMA lawyers had advised it was ‘unlikely to be successful’.

Several respondents to the GP survey said the CQC was right to use available data to prioritise practices for inspection. But 84% believe the CQC was wrong to publish risk ratings without inspecting practices.

‘To publish the data and leave it open for misinterpretation was very unprofessional and has left practices in a difficult position,’ said one GP.

One GP said it had been ‘devastating to confidence’ and practices were being ‘penalised for statistical anomalies reflecting demographics’.

Another GP said: ‘We were on a list of poorly performing practices in the local paper because of being one indicator short of perfect – insufficient flu jabs – which was based on erroneous data. It’s appalling.’

One respondent said three patients had moved from the practice after the ratings were published.

The CQC says the risk indicators ‘are not judgments’ on practices and should not be interpreted as such.

Only inspection ratings reflect the CQC’s view of whether the service provided by a practice is ‘safe, caring, effective, responsive and well-led’, a spokesman said. ‘We are reviewing all feedback and together with NHS England, looking at how we can
refine the indicators.’