Eight in 10 GPs have seen their workload increased by continuing shortages in the past year, while a third have seen patients harmed or their care otherwise negatively affected when a second-choice drug has been prescribed, the GP survey found. 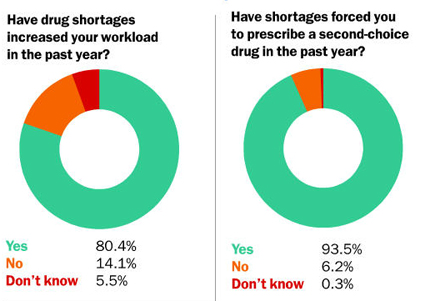 Have any patients taken second-choice drugs due to shortages been negatively affected, including harm or longer recovery?

Basic medicines needed every day in the NHS have become difficult to obtain, and GPs say the problems are getting worse.

GP leaders said the situation was unacceptable and called for doctors to receive regular updates about local shortages.

A group of MPs has demanded that the government acts to solve the problem.

A total of 18 generic products were listed by the Pharmaceutical Services Negotiating Committee as having received DH price concessions, and therefore being in short supply in the UK, as GP went to press.

Recent high-profile cases include the continuing shortage of hypertension drug valsartan, and problems with the supply of Zostavax, now resolved.

But GPs responding to the poll reported problems with a much larger number of drugs, for conditions ranging from conjunctivitis and acne to mental health problems such as depression.

One GP partner in Scotland described an ‘almost daily scramble around to find alternatives to common and heavily prescribed medications, and no real alternatives in some cases’.

One partner in England said: ‘For some drugs, there is just no equivalent available and patients’ treatment is compromised.’

Another partner said: ‘This is a stress we can do without and a potential patient safety issue with increased risk of prescribing mistakes.’

Some GPs said patients had been harmed by drug substitutions resulting from shortages, including side-effects, anxiety, non-adherence and delays starting treatment.

A 2012 inquiry by the MPs’ All-Party Pharmacy Group found shortages were mainly caused by the export of branded medicines intended for the UK to other EU countries.

The group’s chairman, Sir Kevin Barron MP (Lab, Rother Valley), said last month the strengthening pound had eroded this concern. But quotas set by manufacturers and some wholesalers continued to restrict pharmacists’ access to certain medicines, leading to rationing in some cases, he said. This had caused ‘stress and inconvenience’ for patients.

The MP warned that growing problems in the supply of generics, which account for 75% of prescriptions, could be ‘disastrous’ for patients.

‘The government can, and should, be doing more to address the issue of medicines shortages,’ he added.

Dr Andrew Green, chairman of the GPC clinical and prescribing subcommittee, said shortages had become a ‘recurring difficulty’ in the past five years. Supply problems caused by parallel export had diminished only because of changing exchange rates, ‘not because anyone has done anything to address it’. He warned the problem could return.

Dr Green said GPs receive too little information about which drugs are in short supply. ‘If you’re a prescribing GP, the first you know about a shortage of a drug is when patients tell you,’ he said.

A DH spokeswoman said: ‘We are actively involved in a number of pieces of work to tackle these problems, both at a UK level and at a European and global level.’

Warwick Smith, director general of the British Generic Manufacturers Association, disputed the comments made by Sir Kevin and said supply service levels were returning to normal.

Alison Clough, the Association of the British Pharmaceutical Industry’s executive director commercial UK, said that branded medicines supply was ‘much improved’ due to steps taken by manufacturers. She said quotas were a legitimate part of managing medicines supplies.

Viewpoint: PCNs can be at the forefront of tackling health inequlities

Around two thirds of GPs say scrapping revalidation and CQC inspections would make...

Primary care networks (PCNs) have been offered funding in a bid to accelerate the...