Tens of thousands more patients have been diagnosed with dementia following the introduction of a controversial GP incentive scheme to increase diagnosis rates, official data show.

Since the Dementia Identification Scheme enhanced service was launched in October 2014, dementia diagnosis rates have been steadily increasing, analysis by GP has found. 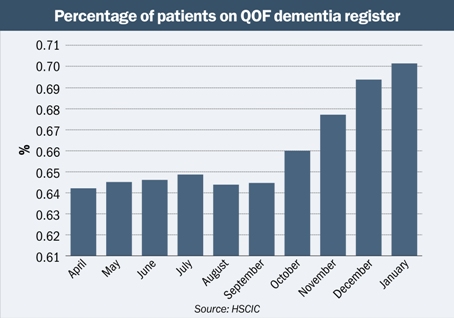 The recorded prevalence of dementia had remained static at around 0.64% from April to September 2014, but has been on the rise since, with around 0.7% of all patients now diagnosed with the condition.

The figures are taken from statistics released by the Health and Social Care Information Centre (HSCIC) ‘in support of the dementia strategy and the dementia challenge’, which aims to boost dementia diagnosis rates to 67% by March 2015. HSCIC has not published data on estimated prevalence of dementia.

Following its launch, the enhanced service was criticised for being ‘politically driven’ rather than benefiting patients, with GP experts saying NHS England should focus on providing support for patients who had already received a diagnosis.

Practices were urged to consider boycotting the scheme by the GPC, and dozens of GPs signed an open letter saying the DES should be withdrawn.