London's GPs are on a collision course with outgoing RCGP chairwoman Professor Clare Gerada, after a poll found 84% oppose her view that independent contractor (IC) status should be scrapped.

A total of 84% of 348 GPs who responded to the poll said they did not want the IC model axed.

Some 83% said they oppose the replacement of IC status with a salaried GP service and 60% said they wanted a variety of types of GP provision.

GPs feared that relinquishing their IC status would have a negative effect on patient care and 'demotivate' the workforce.

Many GPs said the NHS could not afford a completely salaried service because partners carry out so much unpaid work. 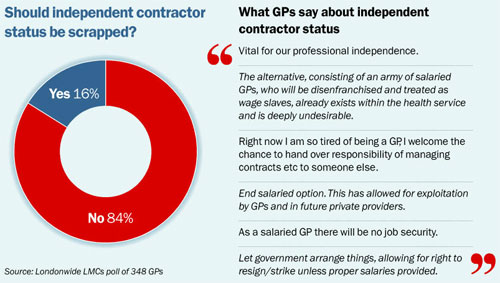 GPC negotiator Dr Beth McCarron-Nash said the results would be similar across the country.

'I believe the profession has said overwhelmingly, when asked, that they want the choice,' she said.

'The DH needs to hear us when we say we are fantastic value.

'There are problems with the contract and in the past few years, practices have had huge cuts in income and rising workload.

'This needs to be addressed, but there is protection in our IC status which gives us flexibility.

'My position is that I will represent the wishes of the profession.'

Professor Gerada, a partner at the Hurley Group, which employs about 60 GPs, said: 'The IC status has served us well but exploring different options is important.

'On balance I think that a mixed model will emerge. IC and salaried models, with practices working together either as geographical clusters/federations with or without pooled community, mental health and acute trust budgets, as GP-led integrated co-operatives.'

A Labour government would offer patients the chance to see 'the same doctor each...

There are strong indications the UK faces a dangerous 'twindemic' of COVID-19 and...