Four out of 10 GP partners have experienced cash flow problems because of missed payments since England's NHS reforms took effect in April, a GP survey reveals.

A total of 74% of partners whose practices experienced cash flow problems were forced to cut their drawings. Staff hours had been reduced by 11% of affected partners, while small numbers laid off practice staff or salaried GPs.

GPs reported cash flow problems being intensified because regular payments made monthly under PCTs had become quarterly or even annual following NHS reforms.

A wider range of organisations are now involved in making payments, with one GP reporting that handling of some payments had been outsourced to a company in India.

Of 434 GP partners who responded to questions on cash flow, 177 said they had funding problems because of missed payments since April.

One GP partner in the north-west of England who took part in the poll said: 'In May we were £23,000 short for paying staff wages. All three partners had to put personal money into the practice account.'

After 'many, many phone calls', the GP said, most outstanding payments had been recovered, but the practice remained short by £16,000. 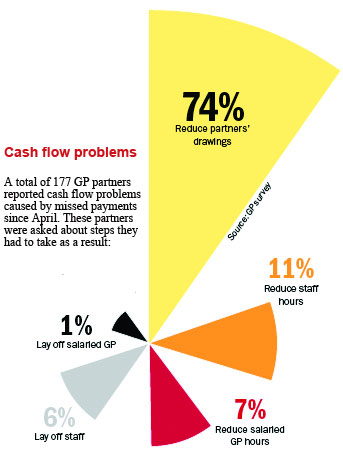 A Cambridgeshire GP said: 'We have not replaced an assistant GP, we have reduced our drawings by around 25% over four years and our staff have not had a pay rise for several years. Not exactly a fertile ground for expanding medical services. We are looking at ways to reduce staff numbers.'

A GP in London said funding had been 'a total and absolute farce over the past few months', with payments arriving late every month.

Another London GP reported that her practice now had an overdraft 'for the first time in 20 years'.

But he said NHS organisations across England have had two years to organise the transfer of payments before PCTs shut down and should have avoided problems.

'Some payments were not identified clearly when they transferred across from PCTs,' Dr Hughes said. He added that reforms had 'fragmented' systems for paying GPs and other providers.

Payment functions had been outsourced to companies, or were now 'authorised by one person and paid by another'.

Dr Hughes added: 'Monthly payments have been switched to quarterly or even annual with little notice - we raised the fact that this would cause cash flow problems.'

Northumberland LMC medical secretary Dr Jane Lothian said practices in her area had seen 'sporadic problems' with missed payments. But she said after heavy cuts imposed in PMS contract reviews, many were operating 'close to the wire'.

Bedfordshire LMC chairwoman Dr Una Duffy said there was 'a lot more chaos than there used to be'.

'I feel very sorry for practices that have had cash flow problems to this extent. It would not be acceptable in other industries.'

NHS England head of primary care Dr David Geddes said: 'Where there have been transition difficulties, these will be resolved as quickly as possible.

'We are aware of some individual local issues and have been in communication with LMCs to ensure we understand the nature of these delays and act to resolve them.

'While fully aware of the impact of any cash flow problem, we have not been informed of any difficulties such as staff being laid off.

'If practices are experiencing such difficulties, we would ask them urgently to contact area teams so that issues can be dealt with as soon as possible.'

NHS England has suggested salaried GPs are likely to receive a 2.1% pay rise from...

General practice risks missing out on millions of pounds in funding this year because...

GP leaders have rejected 'insulting' proposed changes to the GP contract for 2023/23,...

Podcast: Why underdoctored areas face a vicious cycle and how NHS plans could hit GP workload

The team discusses our new GP Insight tool and what it tells us about the GP workforce...

GP partners in decline in almost every part of England

GP partners are in decline in almost every part of England - with the proportion...

Half of GPs have cut working hours to ease workload, poll shows

More than half of GPs have reduced their working hours because of intense workload...