Official GMC statistics obtained by GPOnline reveal clear discrepancies in the deferral rate between GPs of different ethnicities, with white GPs less likely to push back their revalidation date than black, Asian or mixed ethnicity GPs.

The data add to concerns about discrimination against non-white doctors. Recent data have shown black and minority ethnic doctors are less likely to be offered GP trainee posts, and come just a year after the British Association of Physicians of Indian Origin launched legal action against the RCGP over concerns that the MRCGP exam was racially discriminatory.

The latest statistics, which cover the period since revalidation began in December 2012, show that around 10% of white GPs have deferred the process so far, compared to 18% of black GPs. The GMC data on black GPs include both British and overseas doctors working in the UK.

Over the same period, 14% of Asian GPs, 14% of mixed ethnicity GPs and 16% from ‘other ethnic groups’ had to defer the process.

When stratified by qualification region, GPs trained in the UK are the least likely to defer revalidation, at 10%. As many as 15% of those who qualified in the European Economic Area (EEA) and 16% of international medical graduates (IMGs) have deferred the process. 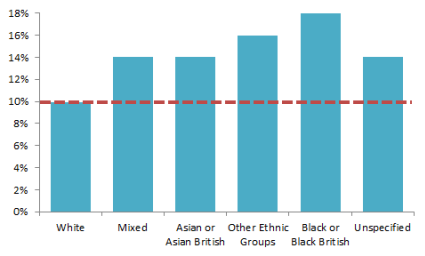 Although deferring revalidation is seen as a ‘neutral act’, GPC deputy chairman Dr Richard Vautrey said it was important to pin down the underlying reasons behind the differences.

‘It would be a useful thing to do to explain why there is variation,’ he said. ‘Without looking at the individual reasons behind this, it is difficult to understand what's actually happening. I think, clearly, that’s something the GMC would want to fully understand, and they would be privy to the information through the responsible officers.’

Deferral rate also varied among other groups. GP previously reported that one in five GPs working in London have had to defer their revalidation, dwarfing the 6% who have done so in Scotland.

The current figures suggest GPs over the age of 65 are the most likely age group to defer revalidation, with over one in five doing so.

Deferral rate also spikes for female GPs in their 30s, who are almost twice as likely as their male counterparts to defer revalidation, a fact likely to be linked to GPs in this group taking maternity leave.

Gender differences overall are small, with 11% of male GPs deferring the process compared to 13% of female GPs.

A spokesman for the GMC said deferral was a ‘neutral act’ and the vast majority of GPs deferring the process simply needed more time ‘to gather information to support their revalidation’.

The process was designed to be flexible to help doctors, and opting to defer the process does not reflect negatively on a doctor or result in punitive action.

He added: ‘These are still early days for revalidation, but the signs are encouraging. Already over 97,000 doctors have had their licences revalidated and we expect to have covered the whole profession by March 2016.

‘What is more, we can see that employers and those who contract with doctors are taking their responsibilities in this area more seriously – appraisal rates are up and the evidence suggests that many doctors are reflecting more on their practice.’