Half of GP practices will consider cutting use of locums and reducing partners' take-home pay in 2016/17, a GPonline poll shows, as 85% warn their practice cannot make further efficiency savings without reducing services for patients.

In evidence to the independent Doctors and Dentists Review Body (DDRB) earlier this year, NHS England warned that GP practices would need to make further efficiency savings in 2016/17.

Despite warnings from the GPC that GP practices have already made almost all possible savings as pay has been eroded over the past decade, NHS England argued it was 'not accurate' to say more savings could not be found. Officials suggested savings could be found through federations, or 'clubbing together to purchase supplies'.

Many are considering drastic measures to maintain profits in 2016/17, including cutting their take-home pay, limiting use of locums, freezing staff pay and reducing services. 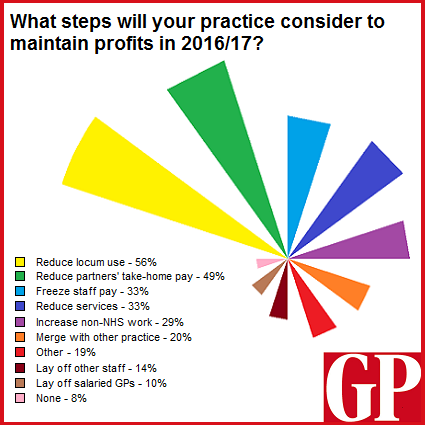 GPC deputy chairman Dr Richard Vautrey told GPonline: 'We have made it clear to NHS England and the DH that the impact of pushing for "efficiency savings" in general practice has resulted in repeated cuts to GP pay, falling morale and a GP recruitment and retention crisis that is impacting on the services patients receive.

'As small businesses it's in practices direct interest to be as efficient as possible, but the rising expenses to earnings ratio suggests that practices have done as much as they reasonably can and the risk now is that further cost cutting will impact on patient care. NHS England and DH must now change their approach and fully fund the rise in expenses to provide some much needed stability for practices.'

GPs responding to the poll described the huge pressure practices face to stay afloat in the face of rising workload and falling income. One said GPs had done an amazing job to keep their doors open, arguing that hospitals would have gone under if they had faced similar reductions in funding.

One GP said: 'We are stretched to the limit financially and stand to lose a lot of money from the PMS/GMS review. We have also got to pay increased CQC fees and [medico-legal] fees and our salary costs will increase to accommodate the living wage. This will come either out of partners' pockets or we will have to reduce patient services, probably reducing the number of doctor sessions we offer, thus reducing appointments.'

Another respondent said: 'We can only make a saving if we cut down on doctor shifts and offer less appointments to patients. Politicians want to have their cake and eat it at our expense. Our fixed costs go up faster than the 1% rise, let alone the increasing clinical demands and complexity making our workload more and hourly rate much less.'

One GP said partners at her practice had not had a pay increase for five years, as income continued to fall.

Another said partners at his practice had put £50,000 of their savings back in to keep it afloat. He said: 'The only efficiency savings we could make are to cut staff pay or staff hours and we will do neither as we value our staff and we need their help to provide the present level of care for our patients.'

He added: 'If you cut the share of the NHS pot for general practice from 12% to 8% there is no surprise practices struggle to provide a service or keep/recruit GPs. If the hospital budget was cut in this way dozens of hospitals would have shut. Doing it year on year to GPs ends up with the GPs being blamed for long waits to be seen and not sorting patients out properly. They should be celebrated as being amazing.'