Four out of five GPs oppose any move to make the profession take back 24-hour responsibility, early results from a GP magazine poll show.

More than 1,000 GPs responded to the poll within less than 24 hours, with half warning they would consider early retirement if forced to take back out-of-hours duties.

GPC leaders look likely to reject any government bid to alter the GP contract to increase the profession’s role, and will discuss ‘very firm’ plans for a response at a meeting this month.

In a speech that coincided with last month’s UK LMCs conference, health secretary Jeremy Hunt suggested contract changes may be needed to make named GPs responsible for all care their patients receive and to make GPs responsible for ‘signing off’ out-of-hours services.

But the GP poll found that one in 10 GPs would consider early retirement ‘if the government hands GPs any extra role in shaping or delivering out-of-hours primary care’. Fifty per cent could quit if forced to take back full 24-hour responsibility.

A total of 79% opposed making a named GP responsible for all care patients receive in the NHS, and just a third backed plans for GPs to sign off out-of-hours services.

GPC negotiator Dr Chaand Nagpaul said the DH had made no firm proposals to the GPC following Mr Hunt’s speech.

In a sign GPC leaders have hardened their position following overwhelming opposition to Mr Hunt’s plans at the UK LMCs conference last month, Dr Nagpaul said the GPC would not be prepared to discuss Mr Hunt’s current plans.

‘At the moment, in the context of propaganda, we’re not aware of any coherent plans from government,’ he said.

Dr Nagpaul said Mr Hunt should ‘see sense’ and realise changing the GP contract would not solve the A&E ‘crisis’. The GPC wanted ‘meaningful dialogue’ with the DH on how CCGs can be enabled to organise out-of-hours services, he added.

Fellow negotiator Dr Peter Holden said GPC leaders had ‘very firm, worked up’ proposals on how to respond to Mr Hunt’s plans to take to the forthcoming GPC meeting. ‘We have various plans in place,’ he said. 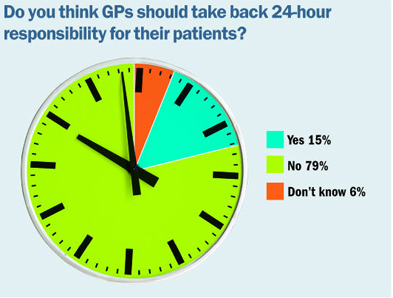 The GP poll findings came as prime minister David Cameron repeated claims the 2004 GP contract was to blame for rising pressure on A&E, after data from The King’s Fund showed 6% of patients waited four hours or longer in A&E between January and March 2013, the highest level since 2004.

The data appeared to expose a growing split between the RCGP and the BMA over how to address A&E failings.

GPC member Dr Michael Ingram suggested there was a ‘disconnect’ between grassroots GPs and the RCGP, after RCGP chairwoman Professor Clare Gerada suggested that with a bigger multidisciplinary workforce, GPs should be prepared to
take responsibility for out-of-hours.

Dr Ingram said it was clear from the LMCs conference that GPs were ‘adamant’ they would not take out-of-hours back.
Even if GPs were considering taking back out-of-hours, he added, they believed there was ‘no point even speaking’ with a government they do not trust.

Professor Gerada also set out proposals in an interview with The Guardian for GPs to take back 24-hour responsibility for about 5% of patients who are the heaviest users of NHS care, as a way to ease A&E pressure.

But GPC leaders hit back at the plans. GPC deputy chairman Dr Richard Vautrey said taking back responsibility for some patients would inevitably raise pressure for a return to 24-hour responsibility for all patients. In a letter responding to the interview, GPC chairman Dr Laurence Buckman warned the plans may not work and could be ‘unfair and potentially discriminatory’.