One in eight GPs say their practice is at risk of closure because of financial pressures, an exclusive GP magazine survey reveals.

Almost three-quarters of GPs expect practice profits to fall this year, following the 0.28% funding uplift for 2014/15, while two-thirds said their take-home pay had already fallen in the past 12 months.

The funding uplift is expected to translate into just £1,600 per practice, and GP leaders have warned there will be ‘little option’ but staff and service cuts in response.

Of almost 700 GPs across the UK who answered questions on funding, 12.3% said their practice was at risk of closure, while almost 20% were unsure about their future survival.

GPC deputy chairman Dr Richard Vautrey told GP: ‘Your survey provides yet more evidence that the crisis we’ve been predicting for general practice is now a reality, with many GPs really worried that they are looking over a cliff edge.

‘The imposed cuts to previously guaranteed MPIG payments and the massive cuts to PMS funding, alongside the derisory Doctors’ and Dentists’ Review Body 0.28% award and rapidly rising expenses, all mean that practices face a financial storm.

‘At best, it will put sustainability of services at risk and at worst, practices will close altogether.’

The bulk of the increase in core funding comes from reinvested MPIG, QOF and seniority pay – NHS England has confirmed to GP the 0.28% uplift would deliver just 27p of the £7.31 per patient global sum increase.

An average practice, with a 6,000 patient list, will receive just £1,620 additional funding this year.

Dr Vautrey said such a ‘tiny rise’ would be ‘laughable if it wasn’t so serious’. He warned that practices had ‘little option but to start looking at reducing staffing levels and making service cuts’. 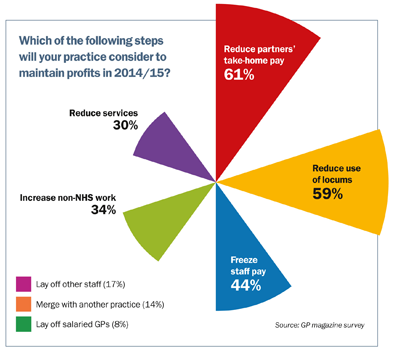 One GP who took part in the poll said her practice faced heavy cuts to funding and feared bankruptcy.

Another cited recruitment problems threatening the future of the practice. Another said he could not see his practice ‘surviving in the short to medium term’. Even among those GPs who did not foresee an immediate threat of closure, many commented that this could change. ‘It is a matter of time unless the funding changes,’ said one.

One GP described the 0.28% funding uplift as a ‘worthless insult’. ‘Another way of reducing our pay,’ added another. Many commented that they would take a pay cut to fund a rise for practice staff.

Dr Vautrey added: ‘We need to see urgent action taken by the government and NHS England, and they should start by committing to increase the share of NHS resources invested in general practice from 7.47%. Instead of removing £235m from PMS, this should be invested in the core contracts of all practices, to provide long-term sustainability.’