Combined techniques may be needed to force a foreign body from the airway. By Dr Anthony Handley

Choking is common, but it is not known how common because most cases are relieved spontaneously or with the help of an onlooker. Studies on the best means of emergency management are scarce, with most of the medical literature consisting of case histories and anecdotes.

Three such methods described are: abdominal thrusts (Heimlich manoeuvre), back blows (or 'slaps') and chest thrusts (a similar technique to chest compressions during CPR).

There is no convincing evidence that one technique is better than another, but several reports have suggested that it often takes more than one, in sequence, to achieve the desired result.

Recognising choking
Recognising FBAO is the key to a successful outcome. It is important not to confuse this emergency with other conditions that may cause sudden respiratory distress, cyanosis or loss of consciousness.

General signs of choking would be if the attack occurs while eating and the patient may clutch at their neck. Ask a conscious patient if they are choking.

Adult choking sequence
This is for adults and children over the age of one year. 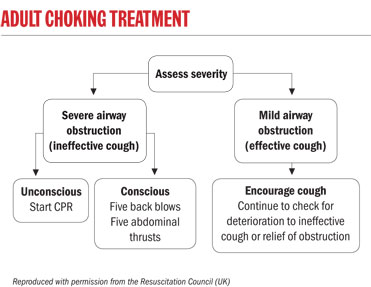 1. If the patient shows signs of mild airway obstruction, encourage him to continue coughing, but do nothing else.

2. If the patient shows signs of severe airway obstruction and is conscious, give up to five back blows.

3. If the patient becomes unconscious, support the patient carefully to the ground. Immediately call an ambulance and begin CPR. Feel for a carotid pulse and initiate chest compressions even if a pulse is present in the unconscious choking patient.

Further complications
Following successful treatment, the foreign body may remain in the upper or lower respiratory tract and cause complications later. Patients with a persistent cough, difficulty swallowing or with the sensation of an object being still stuck in the throat should be referred.

If these manoeuvres all fail, and the equipment and expertise are available, a foreign body may be removed by forceps under direct vision.

GPs warned over prescribing beyond their competence as hospitals shift workload

GPs must resist pressure to prescribe medication outside their competence and push...

GPs have been reassured they do not need to follow up COVID-19 tests amid confusion...

GP appraisals are being redesigned to have a greater focus on wellbeing and reduced...

GP practices have been told to 'gear up for a major expansion of the winter flu programme'...

GPs have been told to re-start health checks and other suspended services as NHS...