One cause for a high Hb level in adults is polycythaemia vera, writes Dr Jecko Thachil

Polycythaemia is a clinical condition characterised by an increased number of red cells in the circulation. It is usually suspected when there is an increase in Hb which is associated with a corresponding increase in haematocrit.

It is useful to note that haematocrit rather than Hb is more representative of blood viscosity and thus is more meaningful in the clinical situation of excessive red cell production.

The reference range for haematocrit in the laboratory is defined as 0.45±0.05 in males and 0.41±0.05 in females, though there can be variations from this range which are physiological rather than pathological. However, a haematocrit persistently greater than 0.52 in a male or 0.48 in a female is generally considered worthy of further evaluation.

An elevated haematocrit may result from either an increase in the total red cell mass as with absolute erythrocytosis, or from a decrease in total plasma volume (relative erythrocytosis). The latter condition is usually due to intravascular dehydration from diarrhoea or third space fluid loss (effusions or oedema) or diuretic use, especially bendroflumethiazide.

Absolute erythrocytosis can be primary or secondary. In primary erythrocytosis, more commonly known as polycythaemia vera, a bone marrow disorder is responsible; in the secondary type, excessive red cell production is driven by another process, for example hypoxia or excess erythropoietin hormone production (see box for causes of erythrocytosis above).

If the raised haematocrit has been confirmed by repeat testing, the next steps are to enquire about symptoms and to establish aetiology. Some patients will be asymptomatic but others may have symptoms attributable to hyperviscosity caused by the increased haematocrit.

Such symptoms can be quite vague (for example, lethargy) or may point directly to the presence of vaso-occlusive events. Visual disturbance, or symptoms suggestive of TIA, angina pectoris or intermittent claudication should prompt an urgent referral (<24 hours="" to="" a="" haematologist="" p="">

It is also helpful to enquire about cardiovascular risk factors as they are important in planning management, especially in the case of polycythaemia vera.

A history of tingling or numbness, pain in the fingers or toes (suggestive of erythromelalgia – a rare disorder characterised by burning pain, warmth and redness of the extremities), and itching after a warm bath are more common in individuals with polycythaemia vera. Further questions should be directed towards identifying any reasons for secondary erythrocytosis (see box above). 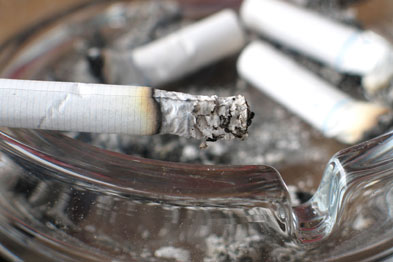 Smoking may be a factor in causing hypoxia-related secondary erythrocytosis

Look for facial plethora which is suggestive of a very high haematocrit. Signs of dehydration or oedema may be obvious (they can lead to mild, relative polycythaemia).

Physical examination can include the respiratory system (to rule out reasons for hypoxia), and auscultation for heart murmurs (previously undiagnosed congenital heart disease, although this is rare).

Palpation of the abdomen may reveal a hydronephrotic or polycystic kidney or liver. An enlarged uterus due to fibroids may also be palpable. Enlargement of the spleen in the absence of any other causes, suggests primary bone marrow pathology.

A flow diagram to summarise the approach to further evaluation is shown here.

FBC may show an increase in leukocyte and platelet counts, which can suggest polycythaemia vera. Other blood tests that are helpful include U&Es and LFTs, since renal and liver pathology are important causes of secondary erythrocytosis.

Increased blood glucose and cholesterol levels can put these individuals at greater risk of complications and need to be determined. A chest X-ray may be appropriate to rule out lung pathology and an ultrasound of the abdomen could be requested to reveal abnormalities in the liver, kidneys or the uterus. Other investigations may be necessary depending on the secondary causes for the high red cell count.

If no secondary causes are identified, or if clinical features or test results point to a diagnosis of polycythaemia vera, referral to a haematologist is indicated.

A mutation in the JAK-2 gene, encoding an intracellular signalling molecule, has recently been found to be positive in more than 95% of  patients with polycythaemia vera. If the JAK-2 mutation is negative, the absolute erythrocytosis could be due to other rare mutations or familial erythrocytosis.

Individuals with a very high haematocrit or with associated vaso-occlusive symptoms also need to be referred urgently, but may be started on aspirin if there are no contraindications. This intervention can help prevent any vessel occlusion, at least temporarily.

Those with familial erythrocytosis need specialised investigations and are best dealt with by a haematologist. Secondary erythrocytosis due to pulmonary disease or renal disease merits referral to the specialists in these areas.

A summary of the management of polycythaemia vera is given in the box below.