The case
This elderly man had, for eight years, ignored the changes in the fourth and fifth fingers of his right hand. The problem had progressed slowly from a tender thickening in his palm, to the increasing flexion of the fingers in a fixed position. At this stage the problem was interfering with his ability to use his hand.

What is the diagnosis, management and differential diagnosis? 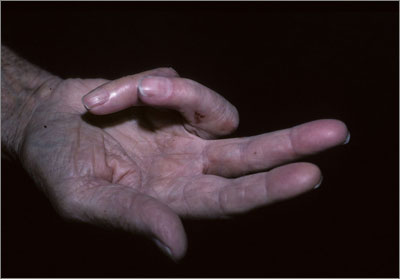 DIAGNOSIS AND MANAGEMENT
The patient was referred to the hospital where it was recommended that, at this late stage, the only approach to deal with the problem of Dupuytren contracture would be to amputate the fingers.

Dupuytren contracture is an autosomal dominant fibroproliferative disease that may also require environmental factors, such as an injury to the hand, to develop. It occurs most frequently in Caucasian men, usually after the age of 50. Fibrosis of the palmar aponeurosis leads to flexion at the metacarpo-phalangeal and proximal interphalangeal joints.

Initially, a tender palmar nodule and cord that are adherent to the skin may be noted. This is followed by a gradually progressive flexion contracture of the finger or fingers. The ring finger is usually the first to be affected, followed by the fifth and third. Both hands are often affected.

In mild cases, no treatment may be recommended but, if necessary, fasciotomy or fasciectomy may be carried out under local anaesthesia.

GPs have demanded an urgent review into soaring demand on general practice, after...

Vaccination sites have been told to offer pregnant women the Moderna or Pfizer COVID-19...

More than 10m people UK-wide have received both doses of COVID-19 vaccine - just...

Viewpoint: Why NICE guidance on domestic abuse needs to be updated

Dr Vasumathy Sivarajasingam explains why screening for domestic abuse should be standard...