Recognition of the erythema migrans rash and other symptoms can aid prompt identification of Lyme disease.

Lyme disease is a tick-borne zoonosis caused by the spirochaete Borrelia burgdorferi. It occurs in endemic foci at temperate latitudes of the northern hemisphere. In Europe, it is endemic from southern Scandinavia into northern Italy, Spain and Greece. In the US, highly endemic areas are the north-eastern and north-central US.1 Transmission of the disease has not been documented in the tropics.

Most cases occur in the summer, coinciding with tick activity, although they can present throughout the year.2

The reported incidence of Lyme disease is increasing, with more than 950 cases reported in the UK in 2011.3 In 2013, the US Centers for Disease Control and Prevention issued a press release to state that the true number of annual new cases in the US is likely to be 10-fold higher than previously thought, at approximately 300,000 annually.4

Many species of mammals can be infected and deer are an important reservoir. Transmission occurs via the bite of infected Ixodes ticks. Ticks can attach to any part of the body, but are often found in hard-to-see areas, such as the groin, armpits and scalp.

The bite is usually painless and even engorged ticks may go unnoticed by the affected individual. Infection rarely occurs during the first 24 hours of feeding,5 so if a tick can be removed promptly, the risk of transmission is low.

Lyme disease can affect the skin, joints, heart and nervous system. The clinical symptoms have been considered in three stages – early localised, early disseminated and late disease – although these are not clear-cut phases.

Erythema migrans
Acute symptoms include fever, headache, fatigue, arthralgia, myalgia and often a characteristic skin rash at or near the site of the bite, known as erythema migrans. This rash usually develops within the usual incubation period of three to 30 days.

Data suggest, however, that 20-30% of those infected do not develop the rash at all.6 Classic erythema migrans is an erythematous patch which slowly expands over days, with or without central clearing.

The appearance of the rash can vary, however. Oedema, vesicles and crusting can occur, and multiple lesions may appear, as a result of haematogenous dissemination.7

This is a bluish-red nodular swelling that can occur on the earlobe, nipple areola, nose, scrotum or extremities. It can be mistaken for a cutaneous lymphoma because it has an intense lymphocytic infiltrate on histology, but resolves following antimicrobial treatment.

Neurological symptoms usually take months to develop, but can also occur early in the infection, within weeks.

Cranial nerve palsies, radiculopathies, a transverse myelitis, meningitis, encephalomyelitis, a ‘glove and stocking’ pattern of peripheral neuropathy, or a motor polyradiculopathy can occur. Neuroborreliosis may be confused clinically with MS, Guillain-Barré syndrome or amyotrophic lateral sclerosis.8 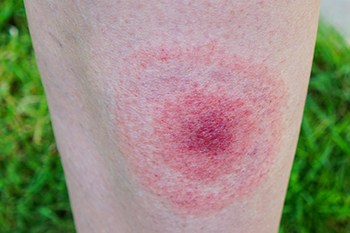 There is often a characteristic skin rash at the site of the bite, known as erythema migrans, although its appearance can vary

Lyme arthritis
Lyme arthritis is a rare complication in the UK, but is more common in the US and central Europe. It may develop a few years after the original infection, and is usually a mono- or oligoarthritis affecting the knee or other large joints. Effusion is often a striking presenting feature.9

Lyme carditis
Lyme carditis is extremely rare, but may present with AV conduction defects, such as heart block.10 Renal involvement is also rare, but an early postborrelial immune-mediated glomerulonephritis has been known to occur in some patients.11

It occurs at acral sites on extensor surfaces of the hands, feet, knees and elbows. Early on, erythematous or violaceous patches occur. It is important to be aware of this appearance, because if the patient has a history of outdoor activities in endemic areas, confirmation of positive serology for Borrelia at this stage can lead to resolution of the symptoms with doxycycline treatment for four weeks.12

Later, atrophic changes are seen, with scaling and thinness of the skin (often described as ‘cigarette paper’ skin), visible superficial veins and sometimes a peripheral neuropathy. The later stages are difficult to treat.

IgM antibodies are only significant during the first four weeks of illness, but are more likely to cross-react and give false positive results, so testing at this stage is problematic. IgG antibodies are more reliable, but can take from four to six weeks to become detectable.

In suspected neuroborreliosis, testing CSF is mandatory and can exclude the infection with a high degree of certainty.13 A clinical encephalopathy identical to that seen in many systemic inflammatory diseases can occur during active infection and is not evidence of CNS infection.

PCR is available and may be useful in testing joint fluid and biopsies of rashes. However, there are still problems with the sensitivity and specificity of PCR on blood,14 and both PCR and culture have poor sensitivity on CSF, where antibody detection is the preferred first-line test.

Borrelia burgdorferi is highly antibiotic-sensitive, and patients with Lyme disease who are treated in the early stages usually recover rapidly and completely.

However, those who are more systemically ill at the time of diagnosis seem to take longer to have a complete response to therapy. For adults, doxycycline 100mg twice daily is first-line, then amoxicillin 500mg three times daily or cefuroxime 500mg twice daily.

If the child is aged eight years or over, doxycycline 4mg per kg per day in two divided doses is recommended.16

Recent evidence suggests doxycycline does not cause adverse fetal effects in the first trimester, but its use is still best avoided in pregnancy if other options are available.17

There is still controversy regarding the optimal duration of antibiotic regimens, however, and Infectious Diseases Society of America (IDSA), European Federation of Neurological Societies, American Academy of Neurology, and International Lyme and Associated Diseases Society (ILADS) guidelines differ.

The IDSA guidelines recommend 14-day courses for adult patients with early localised or early disseminated Lyme disease, in the absence of neurological or cardiac manifestations.16 The IDSA states that less than 10% of individuals do not respond overall and courses can be given up to 21 days.16 The ILADS recommends not less than 21 days of treatment.18

Despite historic preferences for parenteral treatment in CNS neuroborreliosis, oral doxycycline is well absorbed, and a 2014 retrospective study on CSF sampling has shown that this form of the infection may also be highly responsive to oral doxycycline.20

A double-blind randomised prospective trial is now required, however, to establish whether IV and oral regimens are equivalent in CNS neuroborreliosis.21

Chronic sequelae
Up to 10-20% of patients treated for Lyme disease can develop chronic symptoms, known as post-treatment Lyme disease syndrome, despite adequate treatment.

These symptoms can include profound fatigue, pain, joint or muscle aches, or impaired cognitive function. In some cases, these symptoms can last for more than six months, although their cause is still unknown. Patients with post-treatment Lyme disease syndrome usually recover with time, but this process can take several months.

Prevention and prophylaxis
Single-dose prophylaxis within 72 hours of a tick bite is sometimes mentioned in the literature. However, this regimen is not currently recommended by ILADS because the data come from a single trial with methodological problems, and this strategy may contribute to the development of antibiotic resistance.18

Box 1 outlines some basic measures that can be recommended to prevent tick bites in endemic areas.

PCNs: How should the network DES draft service specifications change?