How did you get into singing in a barbershop quartet?

In 2003 a GP colleague told me that he had joined a barbershop chorus in Nottingham, and as he knew I had done some amateur dramatics and singing, he asked me if I would go along to one of the rehearsals.

My impression of a barbershop chorus at that time was the stereotypical straw boater/stripy apron/tea towel over the arm image that so many of us have, so it was with some scepticism that I accompanied him to the first rehearsal. Five minutes into that rehearsal, I was hooked.

Barbershop singing typically is somewhat different to classical choral singing. For example, we never use sheet music in performance, only in learning activity.

Songs are often learnt by ear using specially made teaching tracks, either on CD or in mp3 format, so it is not essential to be able to read music notation.

There are four voice parts, bass (lower notes), baritone (mid-range harmony), lead (usually singing the tune) and tenor - the latter singing a harmony line typically above the lead's tune. The aim is to achieve a combination of vocal tuning, balance and blend across the group, so the sung chords lock and ring. When they do, it is musically very satisfying.

Do you have any particularly memorable moments?

As the size of the chorus grew over the next few months, and I gained a better understanding of the genre, I was invited to sing bass in a barbershop quartet.

I was fortunate in that the other three members of the quartet were just as enthusiastic as I was, and with a lot of hard work and regular rehearsals, we developed our repertoire and our abilities, so we were able to enter as a competing quartet in the British Association of Barbershop Singers (BABS) 2005 National Convention.

Over the next few years, we continued to develop our singing, and in 2009 we managed to achieve fourth place in the National Convention in Llandudno, Wales - our finest hour so far.

My current quartet (QM Quartet) was formed in 2011 and we have been privileged to sing in several venues on the music circuit in Nottingham, some conventional and some not so conventional.

Our performances have been well received by musicians and audiences of all ages and backgrounds, especially in the live music venues where you might more commonly expect a much less eclectic and more modern musical taste.

It is gratifying to think young people are so open minded when it comes to their appreciation of different musical genres, especially when performed by a quartet of 60-somethings. 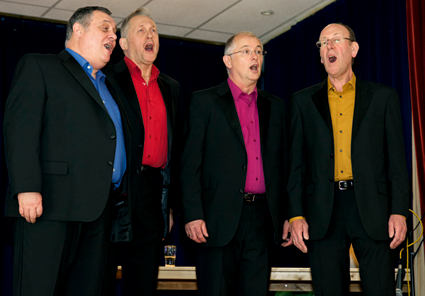 What's next for your hobby?

We continue to gig around Nottinghamshire and are preparing for the preliminary rounds of next year's national quartet contest.

We are having regular coaching and if we're successful at the prelims and achieve a top 16 place, we will qualify to compete at the BABS National Convention in 2015.

It is our hope to do well enough to be invited to sing at the Barbershop Harmony Society International Midwinter Convention in the US in 2016.

Would you encourage other GPs to try barbershop singing?

Most certainly. Although I often hear friends and colleagues say: 'Oh, I can't sing' as a reason for not trying barbershop (or any sort of singing), it is surprising how infrequently this is actually the case.

Putting it simply, if you can manage a recognisable version of 'Happy Birthday', you can sing.

The physical and mental health benefits of regular singing have been well documented. I find it indispensable to help me relax after a hard day at the office, so to speak.

So, to encourage more people to take up singing, we have an active programme of tuition and singing development in our chorus and we run an annual singing course where anyone with an interest can come along and experience close harmony a cappella singing for themselves.

There are 59 registered choruses in the UK, from Aberdeen in the north to Plymouth in the south, and the vast majority run annual singing courses, either free or heavily subsidised, so you are never far away from the opportunity of having a try.

The repertoire of most choruses will include songs from pretty much every decade of the 20th century, mostly arranged in the barbershop style, so there is generally something to suit everyone's taste. The only instrument you need is a voice - and you have one of those already, so there is really no excuse.