'We like to keep it clinical,' jokes Dr Onkar Sahota, gesturing around his small office at City Hall.

The Ealing GP - Labour health spokesman in the London Assembly and chairman of the assembly's health committee - says he is keen to establish cross-party consensus on a Manchester-style devolution deal for the capital.

Dr Sahota hopes to set up in June a round-table discussion with NHS organisations, local authorities and politicians to thrash out the issues and try to build agreement.

While details of the so-called 'devo-Manc' plans to merge health and care budgets under joint NHS and local authority control are still under development, Dr Sahota has a good idea of how he would like devolution to happen in London.

The London Assembly, he says, is a 'politically mature organisation', and there is 'consensus across parties that we will be looking at devolution in London for healthcare'. 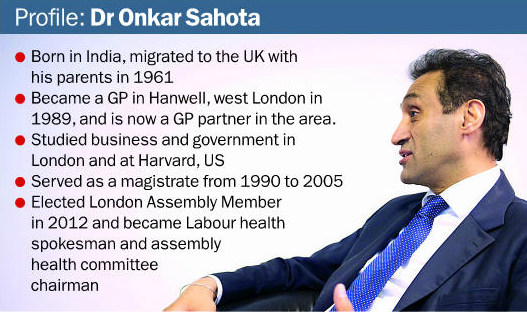 Currently, the Greater London Authority (GLA) - which incorporates the mayor's office and the London Assembly - is responsible for reducing health inequalities and ensuring planning and development, housing, economic development and regeneration policies contribute to London-ers' health.

But Dr Sahota laments the loss of the London-wide strategic leadership with the demise of a single strategic health authority for the capital.

Devolution, he argues, could see the GLA involved in public health and primary care. The Metropolitan Police could provide a model for devolved health and social care in the capital, with a health commissioner politically accountable to the GLA through a deputy mayor for health.

'What we need is a single point of leadership,' Dr Sahota says.

A first-generation immigrant from Punjab, India, Dr Sahota grew up in a politically active Labour family in Southall, west London and had political ambitions from a young age.

As a GP, Dr Sahota must realise that many of his colleagues will be sceptical of handing more control of the NHS to politicians? 'I would ask the question of GPs: what is their role in life? Do they want to be politicians? In which case, give up the day job and come and fight it out,' he says.

GPs have been damaged by clinical commissioning, they don't know their role: 95% are disengaged from CCGs, says Dr Sahota, while the same 5% of 'career committee people' who ran PCTs now run CCGs.

Clinical commissioning, he says, allowed the health secretary to shift blame and responsibility onto GPs, who are in reality just rubber stamping decisions taken elsewhere.

'I am disappointed GPs have allowed themselves to be put in this situation,' he says.

Commissioning is about taking political decisions, Dr Sahota says, so those decisions should be taken by politically accountable bodies, through health and wellbeing boards merged with CCGs.

Clinicians should provide expertise but should not be taking commissioning decisions.

'Who are these GPs accountable to?' he asks. 'Are they accountable to their colleagues? To taxpayers? Decisions should be taken democratically. That's why I am keen on the idea of merging NHS and social care budgets and councillors every four years facing the electorate.'

There is enthusiasm, believes Dr Sahota, for integration of health and social care budgets, but no one should be hung up on whether integration is GP or hospital-led.

Dr Sahota argues there will be an 'inevitable' progression towards a salaried service.

While no one should force GPs to give up independent contractor status, he says, GPs are choosing to be salaried for better work-life balance.

'Why can't hospitals employ GPs, put a GP practice there? If GPs can compete with them, that's fine. If they can't, then become salaried.'

He says the NHS should be proactive and build medical centres where needed, ordering practices with poor premises to move into them. Otherwise, he says, no one will 'be able to get together to raise the funding ... to put medical centres up: they won't have the initiative or drive to do it.'

Labour - the only party yet to commit to the extra £8bn a year NHS England has said it needs by 2020 - should 'say we will give enough funding for its needs', says Dr Sahota.

But he rejects the idea that shifting resources to primary care has to wait until savings are found by hospitals. 'Cut the budgets of the hospitals, and put it in to the community,' he says. 'We should top-slice them and move the services.'