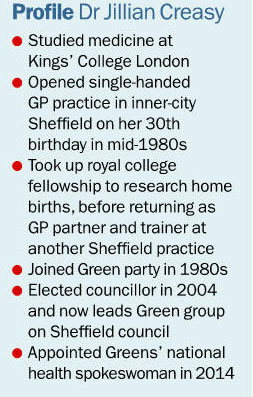 Politicians' lack of NHS experience is a common bugbear for GPs. On this basis, many may view Green party health spokeswoman Dr Jillian Creasy - a GP in Sheffield for 25 years - as an encouraging choice.

But the party has its work cut out to secure GP support - just 16% of GPs identify the Greens as the party they trust most with the NHS.

Dr Creasy admits that at a BMA lecture she gave days before meeting GP, doctors seemed surprised that the party had a health policy at all.

We meet in a room above a healthfood cafe, overlooking Sheffield town hall. The bright green, grass-effect carpeted room is about to become the general election campaign HQ for Dr Creasy's bid to win one of her party's target seats, the ultra- marginal Sheffield Central.

In 2010, she came fourth with 3.8%, while Labour topped the poll by a tiny margin over the Lib Dems.

Although its election manifesto is yet to be published, Dr Creasy outlines the major themes of her party's approach to health.

The Greens take a holistic view of health and wellbeing, with policies across all areas designed to create a more healthy society. That links with the party's opposition to austerity - rising inequality and poverty, says Dr Creasy, contribute to poor health.

The party wants to fund services through increased income and wealth taxes on wealthy people and businesses. Increased NHS funding would be a priority for a Green government, Dr Creasy says, with an immediate injection to bring it back to pre-2010 levels, and an annual above-inflation rise to cope with rising demand.

But in the long term, she says, the Greens want to reduce demand by creating a healthier society.

The Greens' focus on preventive health would mean shifting the balance of resources away from what Dr Creasy describes as expensive, high-tech acute services, towards 'lower tech', more 'practical' care.

That would mean expanding community and primary care, with new community health centres and increased funding for general practice, above even the 11% of NHS spending demanded by the RCGP.

General practice, she says, is 'the glory of the NHS', but is under threat, financially and through the pressures of constant change. Dr Creasy says health professionals should be freed from box-ticking and bureaucracy, to allow them to help patients.

Much of the excess demand on services, she says, comes from 'failure demand', where people in need are let down elsewhere. 'Nobody deals with the problem. So they create demand in all sorts of services.'

In line with the party's commitment to a fully public service, Dr Creasy says, its policy is for 'nationalisation' of general practice, bringing GPs fully into the NHS as salaried employees.

There is a discussion within the party, she explains, about the kinds of organisations that should be able to provide NHS services, from charities and social enterprises to co- operatives. 'We would nationalise it, but there is a recognition of complexity,' she adds.

However, she says: 'My personal view is, general practice has worked brilliantly.' In defence of the current model, she describes her 11 years at an inner-city Sheffield practice.

'We were a cohesive unit, able to move quickly when things changed, able to respond. We did all kinds of amazing things.' General practice, she adds, has done, and still does, 'incredible things', and could do more in the future.

Having long been active in local NHS campaigns, Dr Creasy says an NHS Bill to restore government responsibility for service provision and reverse marketisation would be a top priority for Green MPs.

On 11 March, the Greens' sole MP, Caroline Lucas, launched the cross-party NHS Reinstatement Bill, backed by MPs from Labour, the Lib Dems, the SNP and Plaid Cymru, to reverse parts of the 2013 Act, abolish NHS England, and integrate health and care services.

There is no chance of waking up to a Green government on 8 May, but with Labour and the Tories neck and neck, and neither likely to win an overall majority, Green MPs could be courted to support a Labour-led coalition or minority administration.

As far as health policy is concerned, Dr Creasy says, the Reinstatement Bill and increased funding would be red line issues for the Greens in any post-election talks.

Labour shadow health secretary Andy Burnham has promised to repeal the 2013 Health Act, but Dr Creasy fears he may be outmanoeuvred by opponents within his party.

'This exciting stuff that he's saying might not happen,' she says. 'So it is really important we hold them to it.'

As a GP - currently a locum - Dr Creasy shares the fears of others that promises to undo the coalition's reforms could mean more reorganisation. She walks the same tightrope as Mr Burnham as she speaks of radical aspirations while acknowledging the dangers of organisational change.

'My personal hope,' she says, 'would be to move away from the purchaser- provider split, competition and profit-making, within the existing organisations.'