The NHS is under threat as never before, warns east London GP Dr Jackie Applebee. GPs across the UK must stand up and fight to save it - starting by joining protests across the UK on 3 February.

This winter crisis is entirely of the government’s making and they must be held to account. The protest organisations Health Campaigns Together and The People’s Assembly have called a demonstration in London on 3 February.

If you have never been on a demonstration before, this is the time to change - and bring everyone you know! The march won’t save the NHS on its own, but as part of a whole host of campaigns all over the country it can play a large part. There will be local marches, too, so please look at healthcampaignstogether.com to find out what's happening in your area.

There can be no doubt that the NHS is facing an unprecedented crisis when Chris Hopson, chief executive of NHS Providers says that 'current winter pressures facing the NHS have brought us to a watershed moment'. The governments repeat the mantra that health spending is greater than ever before. This may be true purely in cash terms, but in real terms this is far from the case.

Health spending is currently at £123.8bn. The Office of Budget Responsibility projects that, to maintain standards and meet rising demand, spending needs to rise to approximately £153bn and at a rate of 4.3% annually. The King's Fund think tank has shown that the rate of growth of the DH (recently renamed the DHSC) budget has slowed considerably from the long-term average of approximately 4% a year, to 1.2% in real terms between 2009/10 and 2020/21.

This financial squeeze with drastic cuts in hospital beds by over a third between 2000 and 2015 alongside swingeing cuts to social care have created a perfect storm.

The media headlines paint a graphic picture of what this means for patients. In the week between Christmas and New Year nearly 17,000 people were forced to wait more than half an hour in ambulances outside A&E departments. Elective surgery has been cancelled to free up beds, which over the Christmas period had average occupancy rates of 91.7%, far exceeding the accepted safe upper limit of 85%. 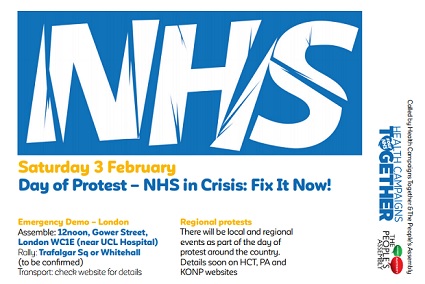 Some hospitals are caring for patients in corridors and medical students are being urged to help relieve the NHS winter crisis because short-staffed hospitals are struggling to cope. Nurses have resorted to using food banks as they struggle to make ends meet on low pay and are leaving the profession in greater numbers than they are joining it.

GP surgeries are so stretched that there is often a two- to three-week wait for a routine appointment.

This is an NHS at breaking point. The situation is extremely unsafe and it is only because of the dedication of NHS staff that there has not been a major catastrophe…yet.

The government has tried to scapegoat overseas migrants, GPs for not having enough appointments to offer and patients for 'inappropriate' use of the NHS. Yet the truth is that none of these groups are responsible. The NHS would collapse without foreign health workers. We are far more likely to be treated by someone from overseas than to be competing with them for care.

Evidence shows that patients who are heavy users of A&E are also heavy users of general practice, debunking the myth that more GP appointments would ease the pressure on A&E. These people are ill, they are not abusing the NHS.

The truth is that the blame for this debacle lies squarely with the government who choose to underfund the health service. We are told that the NHS is unsustainable and needs to reform, yet Britain is the fifth or sixth largest economy in the world and the NHS is the most cost-effective healthcare system in the developed world. If we could afford to build the NHS out of the ashes of World War Two when government debt was far higher we can afford it now.

We must protest in the strongest terms about what is being done to our NHS. There is huge public affection for the NHS and rising outrage as people are beginning to understand the threat it is under. This is crunch time for the NHS, we must stand up and fight for it now or we will lose it.

GPs are ideally placed to advertise the demonstration and to encourage people to attend. Leaflets can be downloaded from the Health Campaigns Together website, printed off and put in waiting rooms. Posters can decorate walls.

We owe it to our children and grandchildren to preserve the NHS, publicly funded out of general taxation, publicly provided and free at the point of delivery. Aneurin Bevan said that the NHS will survive only while there are folk with the faith to fight for it. Will you be one of those folk?

Join us on Saturday 3 February on Gower St, London at midday.