With 100 days to go until the general election, Labour leader Ed Miliband set out details of the party's vision for the NHS. Neil Roberts reports.

One hundred days before the general election, the Labour party launched its health policy, an ambitious 10-year plan for 'whole person care' centred on full integration of health and social care in a single service.

Shadow health secretary Andy Burnham was back at the King's Fund think tank two years after launching plans for integration there. This time, he had the detail health leaders have been waiting for.

Mr Burnham was keen to make clear he had taken criticism on board. Despite announcing just four months ago that he would require hospitals to form integrated care organisations (ICOs), which would employ salaried GPs and could swallow up practices, Mr Burnham said last week he would not now impose a single model of integration.

NHS England's Five Year Forward View, he said, demonstrated there were different paths. Change, he added, would be evolutionary.

GP leaders had expressed alarm when Mr Burnham first raised the possibility of hospital-led integration. It would 'destroy everything that is great' about general practice, warned RCGP chairwoman Dr Maureen Baker.

Under the finalised plan, ICOs would integrate local health and care services into a single organisation with a single budget, 'providing services directly or through trusted partnerships', Mr Burnham said.

So GP practices could remain independent contractors working with the ICO, could merge into an ICO, or as under the Five Year Forward View multispecialty community provider model, groups of practices could lead integration, even taking control of hospitals. 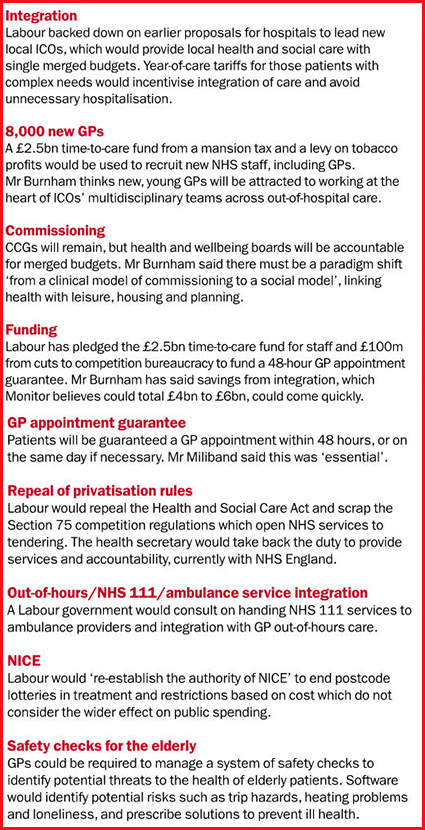 GP leaders welcomed the apparent change of heart. Dr Baker says Labour has 'recognised there are a variety of models'. Mr Burnham, says GPC chairman Dr Chaand Nagpaul, has 'clearly rowed back' from a 'simplistic' plan for hospital-led integration.

With a growing consensus that integration should be based on general practice and international evidence supporting strong primary care, Dr Nagpaul says, Mr Burnham's previous statements were 'out of kilter with the emerging consensus'.

'We put those arguments to him and I suspect he must have reconsidered the original ideas,' he adds. 'It is positive that Labour policy is now not so fixed on a single model of hospital-led organisations.'

Mr Burnham, however, maintained it would be necessary to reduce the number of NHS organisations to help integrate services and make savings. 'We need to break down the silos and end those divides that hold us back,' he said.

While reassuring GPs they would not be forced to merge under hospital control, Mr Burnham was firm that they must embrace integration.

GPs, however, may remain suspicious of the party's long-term aims for general practice.

Dr Nagpaul suggests that after previous broken promises, GPs may be more interested in what the next government does than what parties might promise in the heat of an election campaign. 'What is important is that any incoming government needs to commence its term listening to professionals,' he says.

'What we do not want is a repeat of last time, where parties say one thing before an election and implement another.'

The foundation trust, integration and competition regulator Monitor would be given a new role under a Labour government, advising and reporting on the viability of local health economies' provider arrangements and 'encouraging' the development of integration. It would be stripped of its competition functions, which Labour believes conflict with promoting integration.

Mr Burnham also repeated his view that many of the 8,000 new GPs Labour has promised may choose to work as employees for ICOs.

Integration, he says, will be incentivised with a new year-of-care tariff that will reward services for keeping patients out of hospital, as opposed to the current system where funding pulls patients towards the most expensive services while providers in the community are neglected.

The tariff would initially be used for vulnerable patients most at risk of hospitalisation, but could be rolled out further.

One surprise announcement from Labour's policy launch was a plan to consult on integrating GP out-of-hours care, NHS 111 and ambulance services.

Ambulance providers should take over NHS 111 contracts and integrate with GP out-of-hours services to provide services closer to patients' homes - a default presumption of treatment at home, in line with the rest of the health and care service.

But Dr Nagpaul says the proposal is 'too simplistic' and fails to address many of the problems in unscheduled healthcare.

Mr Burnham has promised to balance new rights for patients, such as the 48-hour GP appointment guarantee, with asking the public to accept new responsibilities for their own health and by 'not applying on-demand consumer expectations' to the NHS.

'We need to be honest with people: the NHS won't be able to do everything,' he said.

But Dr Nagpaul says that while an honest conversation with the public about what general practice can and cannot provide would be refreshing, it was politicians who were stoking demand and heightening expectations, for political reasons.

'It is very disappointing that Labour promotes patients being able to see a GP within 48 hours, when the service is at breaking point,' he says.

Labour leader Ed Miliband defended that pledge. 'I understand why people might be anxious about change,' he said. 'I think this is essential not just to guarantee a good service, but it is absolutely essential to take pressure off the system of accident and emergency.'

Mr Burnham added that providing the earliest possible access to primary care was essential to creating a preventive service. But Dr Nagpaul says the party must reconsider the policy.