Section 1: Epidemiology and aetiology
Diverticular disease (or diverticulosis) refers to the presence of diverticulae within the GI tract.

Diverticulosis occurs most commonly within the colon, at sites of vascular perforations, where arteries penetrate the muscularis to reach the underlying submucosa and mucosa. 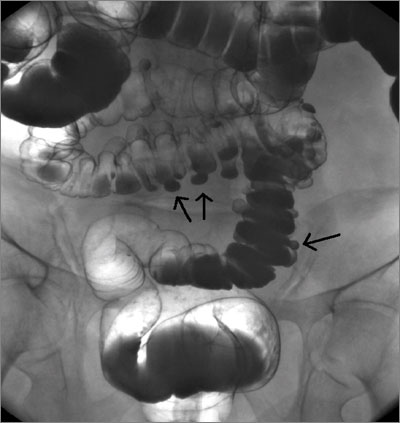 In fact, these acquired lesions are best described as pseudo-diverticulae as they do not contain all layers of gut wall (unlike true congenital diverticulae such as Meckel's diverticulum). Diverticulitis refers to inflammation of a diverticulum, and is the most common complication of diverticular disease.

Epidemiology
Diverticular disease is the most common colonic disease in western countries, and its prevalence increases with age. Below the age of 40, prevalence is 5-10 per cent, increasing to 30 per cent by the age of 60, and >50 per cent in those aged 80 or older.1 The incidence is thought to be similar in men and women.

Aetiology
Diverticulosis is thought to result from increased intraluminal pressure within the colon, which is affected by dietary factors such as fibre.

The link between insoluble fibre in the diet and diverticulosis was first made in the 1970s when it was noted that British people taking a high-fibre diet had a low prevalence of diverticulosis.2

The protective effect of vegetable fibre against development of diverticulae is thought to be due to an increase in the bulk of the stool, resulting in intracolic pressures that remain close to those occurring during normal bowel peristalsis.

Conversely, a low-fibre diet results in less bulk, leading to higher intracolic pressures required for peristalsis of the smaller faecal mass, and the propensity to form outpouchings in areas of bowel wall weakness.

Although other factors have been implicated in the development of diverticulosis, such as genetics, smoking, caffeine and alcohol intake, there is no conclusive evidence to date.

Diverticulosis
Diverticulosis is by definition asymptomatic, however its presentation is related to the underlying pathophysiology and associated complications.

Patients may present with chronic symptoms of lower abdominal colic, abdominal bloating or change in bowel habit, or as an emergency with severe abdominal pain, fever or rectal bleeding. Such patients should be referred for surgical review.

Definitive diagnosis is usually made with CT or barium enema, or endoscopically with flexible sigmoidoscopy or colonoscopy.

As many of the symptoms of diverticular disease are common to colorectal cancer, these investigations serve the dual purpose in ruling out such pathology.

Complications
Diverticular disease accounts for up to 50 per cent of massive lower GI bleeds.5 As a diverticulum herniates, the propensity for rupture and bleeding increases.

Bleeding is usually sudden and painless. Clots may be present, but melaena is uncommon.

Diverticulae inflammation is thought to originate from mechanical obstruction of the mouth of the diverticulae with inspissated faeces, causing stasis and rendering it vulnerable to invasion by colonic flora.

The most common region involved is the sigmoid colon, resulting in principally left iliac fossa (LIF) symptoms and signs.

Presentation is of LIF tenderness, possibly with fever and malaise. A tender mass may be palpated, indicating the presence of an inflammatory mass.

There may be leukocytosis on FBC and an elevated CRP. An abdominal X-ray may be helpful to rule out other colonic causes of abdominal pain and, if perforation is considered, an erect chest X-ray is useful.

Diverticular abscesses may be localised (peridiverticular, mesenteric or pericolic) or walled off by omentum resulting in a pelvic abscess. Failure to wall off the perforation will lead to generalised peritonitis.

The presentation is similar to diverticulitis, with the presence of a tender palpable mass. Rectal examination may demonstrate tenderness. Signs of systemic toxicity, such as pyrexia and tachycardia, may also be present.

Diverticular fistulae occur in about 2 per cent of patients with diverticular disease and occur as a result of pericolic abscess perforation into adjacent viscera such as the bladder (60 per cent) or vagina (30 per cent).5

Symptoms depend upon the organ involved, for example recurrent UTI, pneumaturia and feacaluria may occur with colovesical fistulae. A colovaginal fistula may present with the passing of faeces per vagina.

Investigations should attempt to identify the fistula and rule out malignancy.

Plain X-rays may show dilated bowel loops, but a CT scan or barium enema is usually required to identify any strictures.

Colonoscopy may be undertaken to obtain biopsies and exclude malignancy, although the presence of a stricture can make endoscopy difficult.

Diverticulosis
Asymptomatic diverticulosis identified incidentally does not require further diagnostic evaluation or treatment, although patients should be advised to adhere to a high-fibre diet, as should those with diverticular disease presenting with irrit-able bowel symptoms.6

Bulk-forming laxatives, such as ispaghula husk, may be used to supplement the diet if a high-fibre diet is insufficient.

About 30 per cent of patients re-bleed6 and in such cases it can be difficult to determine that the bleeding is arising from a diverticulum, or indeed the colon itself. In such patients exclusion of brisk upper GI cause using oesophago-gastro-duodeno-scopy (OGD) is prudent.

Other colonic causes of per rectum bleeding such as angio-dysplasia or cancer must be considered. Occasionally surgery is required.

Patients with complicated diverticulitis such as abscess or fistula should be investigated with contrast X-rays, ultrasound or CT. Similarly, further investigation is required in those who fail to respond to treatment within a few days.

A proportion of patients with mild diverticulitis may be managed in the community with oral antibiotics and oral fluid hydration. However, admission must be arranged for elderly or frail patients, those with significant co-morbidities, suspicion of complicated diverticulitis or persistent symptoms.

Diverticular abscess
Small abscesses may be treated conservatively in the same manner as simple diverticulitis. However, larger abscesses causing systemic toxicity require drainage, which can be performed either percutaneously (with ultrasound or CT guidance), or operatively (usually in conjunction with resection of the diseased segment).

Diverticular stricture
Endoscopic dilation offers an advantageous bridge to elective surgery, as well as biopsy acquisition to exclude malignancy. Surgery is usually required and involves resection of the diseased segment. Obstruction can also result from extrinsic compression (e.g. secondary to an abscess) and in this case treatment consists of drainage.

Diverticular fistulae
Diverticular fistulae are commonly treated electively. After diagnosis has been confirmed, surgery is undertaken with resection of the diseased segment and fistula closure. Antibiotic therapy is recommended in the interim, particularly in patients with colovesical fistulae, to prevent urinary and renal sepsis.

Section 4: Prognosis and follow up
Most patients with uncomplicated diverticulitis recover with antibiotics. However, about 30 per cent of those with a single confirmed attack suffer subsequent episodes, most of which occur within five years.5

Recurrent diverticulitis following surgery occurs in less than 10 per cent, however progression of diverticulosis in the remainder of the colon still occurs in up to 15 per cent of patients.

Emerging treatments
Mesalazine (5-aminosalicylic acid) has been reported to decrease the incidence of recurrent acute diverticulitis,7 however its efficacy remains debatable, and the exact mechanism of action is unknown. It may be considered in those for whom surgical intervention is deemed inappropriate.

Follow up
Routine follow up is not required for diverticulosis, especially as there is no established association with colorectal neoplasia. Patients are treated on a symptomatic basis, and given advice regarding lifelong high-fibre intake.

Patients who have undergone surgery may be followed up in the surgical outpatient department. A proportion of patients that have required a stoma may be considered for reversal in the future depending on age, comorbidities and extent of disease.

For an archive of all GP clinical reviews visit www.healthcarerepublic.com/clinical/GP

Red flag symptoms in patients with loss of appetite and the importance of taking...

Map: Which CCGs have the highest COVID-19 vaccine coverage?

More than 40m doses of COVID-19 vaccine have been administered in England - but how...

More than a third of UK GPs plan to retire early and many more to reduce their working...