An overview for GPs of the diagnosis, management and prognosis of this type of non-Hodgkin lymphoma.

Diffuse large B-cell lymphoma (DLBCL) is the most common type of high-grade non-Hodgkin lymphoma (NHL). About 5,000 cases are diagnosed every year in the UK.1

DLBCL is slightly more common in males than in females and much more frequent in older patients.

Risk factors
For most patients with DLBCL, the aetiology is unclear. However, certain risk factors are associated with the development of NHL, including increasing age and immunosuppression. HIV infection increases the risk of NHL more than 100-fold. For patients receiving immunosuppressive drugs after solid organ transplantation, the risk of NHL increases 30- to 50-fold.

Classification
Lymphoma is classified as Hodgkin or non-Hodgkin type. NHL encompasses a heterogenous group of lymphoid malignancies, subclassified according to whether they exhibit an aggressive or an indolent clinical course and whether they have originated in Tor B-lymphocytes.2

DLBCL is the most common type of NHL, accounting for about one-third of cases in the UK.3 DLBCL is classified as high-grade or aggressive, but more than 60% of patients will be cured following first-line chemotherapy.

This is in contrast to low-grade or indolent NHLs, which are usually incurable but nevertheless associated with a good prognosis.

The key advance in understanding the biology of DLBCL has been molecular classification according to the malignant B-cell of origin, by gene expression profiling.4-6

Type III is a default category where neither gene set is expressed at a high level.

Most patients present with lymphadenopathy +/hepatosplenomegaly, but almost any other organ can be involved. Systemic or 'B' symptoms may be present.

Primary mediastinal B-cell lymphoma, a rare subtype of DLBCL, classically presents with an isolated mediastinal mass in the absence of disease elsewhere.

This very aggressive subtype may be associated with superior vena cava obstruction (SVCO), a medical emergency. Possible symptoms of SVCO include dyspnoea, cough, chest pain or dysphagia. Signs include facial/arm oedema or venous distension in the neck or chest wall.

Initial investigations should include routine bloods, such as FBC, renal and liver profiles, lactate dehydrogenase (LDH) level and a chest X-ray for any mediastinal masses.

Staging and biopsy
Initial staging consists of a contrast enhanced CT scan of thorax, abdomen and pelvis. An FDG-PET scan is routinely performed at baseline.

All patients undergo a bone marrow aspirate and biopsy, to look for bone marrow involvement.

Patients are staged according to the Ann Arbor staging system (see table 1). Once the stage has been determined, note is made of any 'B' symptoms. For example, if a patient has lymphoma on both sides of the diaphragm and 'B' symptoms are present, they are classified as stage IIIB. 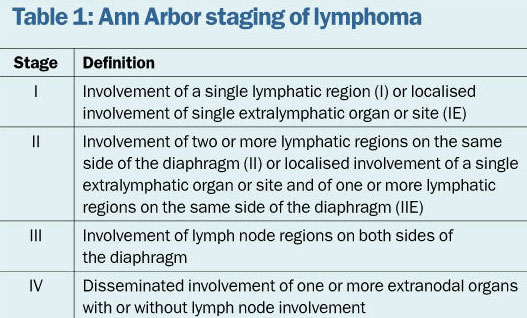 A biopsy is essential for the diagnosis of lymphoma. An excisional lymph node biopsy is preferred where possible. However, if the lymph node is not easily accessible, a core biopsy of a lymph node mass or involved organ is used to make the diagnosis.

Management of DLBCL depends on the stage of disease at diagnosis.

In addition, comorbidities, especially cardiac dysfunction, need to be taken into consideration.

Older patients or those with a history of cardiac disease should undergo an echocardiogram to assess left ventricular function.

Most patients will be treated with a combination of rituximab, cyclophosphamide, doxorubicin, vincristine and prednisolone (R-CHOP) chemotherapy as the first line, but the number of cycles administered depends on the extent of disease.

For patients with stage I non-bulky disease, the standard of care is three cycles of R-CHOP followed by involved field radiotherapy.

For patients with stage I (bulky)-IV disease, the standard of care is six cycles of R-CHOP administered every 21 days.

In the pre-rituximab era, the results of the NHL-B2 trial showed that CHOP-14 (administered every 14 days) was superior to CHOP-21 in elderly patients with DLBCL.7 Concurrently it was found that the addition of the anti-CD20 monoclonal antibody rituximab improved cure rates by 10-15%.8-10

A phase III randomised trial investigated whether the survival benefit from dose intensification with R-CHOP-14 (administered every 14 days) versus R-CHOP-21 (administered every 21 days) persisted in the presence of rituximab in patients of all age groups with untreated DLBCL.11

In this study, R-CHOP-14 was not superior to R-CHOP-21, which remains the standard of care.

Most patients (approximately 60%) will be cured following first-line R-CHOP, but the remainder will relapse or have refractory disease.

Improved understanding of disease biology in terms of malignant B-cell of origin has partly explained why some patients are not cured following initial chemotherapy.

In the Lymphoma/Leukaemia Molecular Profiling Project (2002), the ABC subtype, which makes up approximately 30% of DLBCL, was associated with much poorer outcomes compared to either GCB-type or type III DLBCL6 and this holds true in the rituximab era.4

ABC-type DLBCL is associated with constitutive overactivation of the NF-kappaB pathway,12 which appears to suppress the apoptotic effect of cytotoxic chemotherapy13 and may contribute to the observed differences in outcome between DLBCL subtypes.

Bortezomib is a proteosome inhibitor, which acts by inhibiting the NF-kappaB pathway.14 A current trial is investigating the benefit of the addition of bortezomib to R-CHOP in first-line treatment across all molecular subtypes of DLBCL.

The International Prognostic Index (IPI)15 is the most commonly used prognostication tool in patients with DLBCL.

The IPI combines five high-risk features (age >60 years, elevated LDH, performance status 2 or higher, stage III/IV and more than one site of extranodal disease), which can be used to risk-stratify patients.

Although more than 60% of patients with DLBCL will be cured following R-CHOP, a significant proportion will have relapsed or refractory disease. Unfortunately, for those patients undergoing second-line treatment, the outcome is much poorer, with three-year overall survival rates of <50% quoted in the landmark CORAL study.16

Follow-up
If the patient is in remission on completion of first-line R-CHOP, regular outpatient follow-up is recommended for five years.

A 61-year-old, previously healthy woman presented with a four-month history of severe back pain, but no history of weight loss, sweats or fever.

A staging CT of the thorax, abdomen and pelvis showed mesenteric and external iliac lymphadenopathy. A bone marrow biopsy was negative for involvement by lymphoma and baseline FDG-PET confirmed stage II disease.

In the absence of 'B' symptoms, the patient was classified as stage IIA and commenced treatment with six cycles of R-CHOP chemotherapy administered every 21 days.

Restaging CT scans were performed after every two cycles of R-CHOP and the patient had an initial partial response.

Restaging CT at the end of treatment showed persistence of the paravertebral mass and external iliac lymphadenopathy, however, and this was FDG-avid on PET.

The patient commenced second-line chemotherapy with rituximab, gemcitabine, cisplatin and methylprednisolone (R-GEM-P), to which she had a complete response after two cycles. She underwent stem cell harvesting and will proceed to an autologous stem cell transplant following a third cycle of salvage chemotherapy.

2. WHO Classification of Tumours of Haematopoietic and Lymphoid Tissues, 2008.

Viewpoint: Patients and GPs are unhappy with access to general practice, what's the solution?

Practices are deluged with work, yet many people still think they are ‘closed’. The...