What are the risks and outcomes in patients with existing and gestational diabetes in pregnancy? Dr Polly Weston advises on assessment and management.

The diagnosis of diabetes in pregnancy is arbitrary, depending on where the cut-off is placed on the normal spectrum of glucose tolerance. About 2-5% of UK pregnancies are affected by diabetes.1 This may be pre-existing type 1 or 2, or onset during pregnancy (gestational).

All adverse outcomes of pregnancy are increased by diabetes (see box 1); this relates to glycaemic control. The most important aim is to achieve maternal normoglycaemia.2-6

It is becoming more common as the prevalence of obesity and advanced age in pregnancy increases.3 In the UK, the prevalence of GDM is increased 11 times in women from India, eight times in those from south-east Asia, six times in Mediterranean and Arab women, and three times in African-Caribbean patients.3 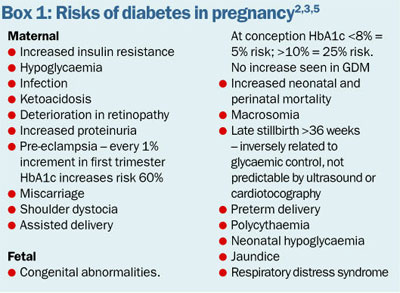 The key feature of management is preconception counselling.1,6 This aims to achieve good glycaemic control at an early stage and allows assessment for the presence of complications such as hypertension, and renal or eye disease (see box 2). 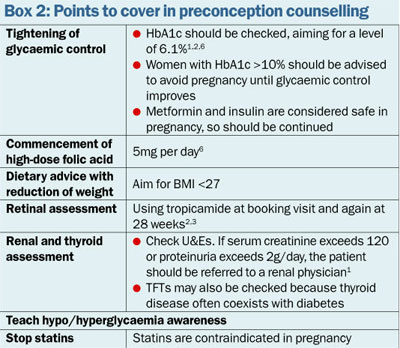 A pregnant woman with type 1 diabetes should be referred to the antenatal clinic. An early dating and viability scan is recommended.

GDM is asymptomatic and develops in the second or third trimester.

Antenatal diagnosis is usually with a 75g fasting glucose tolerance test at 28 weeks. If the woman has significant risk factors or previous GDM, this can be done at 18 weeks.6

All pregnancies complicated by diabetes are high risk and should be managed in a specialist antenatal clinic. Risks are related to glycaemic control at conception; GDM, which usually develops during the second trimester, has fewer risks.2

Women with pre-existing diabetes are entitled to free nuchal translucency screening at 11-13 weeks. Additional ultrasound scans are arranged to look at the fetal heart in detail and fetal growth from 28 weeks to detect macrosomia, polyhydramnios or intrauterine growth restriction.1-3

Persistent hyperglycaemia (postprandial >7.8mmol/L and fasting >5.9mmol/L) are indications for the introduction of hypoglycaemic treatment.4,5 This may also be introduced if ultrasound shows macrosomia, defined as a birthweight >4.5kg. Insulin is a growth-promoting hormone, so babies of poorly controlled diabetic mothers tend to be large, with proportionally high abdomen to head ratios, enlarged organs and significant subcutaneous fat.

Type 1 diabetes
Normal pregnancy is associated with an increase in insulin production and resistance, so women with type 1 diabetes often require increasing doses of insulin as their pregnancy progresses, especially between 28 and 32 weeks.5 Tight glycaemic control needs to be balanced against the risk of hypoglycaemia and the patient needs to be educated about this. Most maternal deaths in the UK caused by diabetes are due to hypoglycaemia.3

If diabetic ketoacidosis (DKA) is suspected during pregnancy, the patient should be admitted to a level two unit where obstetric and medical care are available. DKA has a fetal mortality rate of about 50%.3

Labour and birth
Most patients will be delivered by their due date (NICE recommends by 38 weeks),1 with induction for vaginal delivery or by caesarean section.

During labour and birth, a sliding scale of insulin will often be used to maintain normoglycaemia around the time of delivery. This reduces the chance of neonatal hypoglycaemia.

Fetuses of diabetic mothers tend to mature more slowly and production of lung surfactant is often later, so steroids may be given if early elective birth is planned.

There is an increased chance of fetal distress, stillbirth and assisted delivery, so diabetic mothers are continuously monitored in labour. Delivery in hospital is advised.

The baby will be observed to ensure there is no hypoglycaemia or respiratory distress. Women are advised to feed their baby within 30 minutes of birth and then every two to three hours to maintain neonatal blood glucose levels.

Postnatally, women with GDM can stop their hypoglycaemics. Women with type 2 diabetes can continue metformin or glibenclamide while breastfeeding. Those with insulin-dependent type 1 diabetes can revert to their pre-pregnancy insulin regimen.4,6

Women who developed GDM should undergo repeat glucose tolerance testing six weeks postnatally and annually thereafter. These patients have a 40-60% chance of developing type 2 diabetes in the next 10 years. Modification of diet and lifestyle, especially avoiding obesity, can help to prevent this. Without significant weight loss, GDM usually recurs in subsequent pregnancies.

Diabetes during pregnancy is a factor in later metabolic disturbance in the offspring. Obesity and type 2 diabetes are more prevalent in patients when diabetes was present during their fetal development.6

Bianca, a 37-year-old nulliparous woman, attends the GP surgery because she and her partner have been trying for a baby for six months with no success. Bianca has type 1 diabetes, which was diagnosed at the age of 11. She takes insulin glargine 10IU at night and has no allergies.

Her GP calculates her BMI at 32 and discovers she is smoking four to five cigarettes a day. He advises her about smoking cessation and weight loss by diet and exercise, and commences her on 5mg folic acid. Her HbA1c is 7.2%. He advises her to return as soon as she has a positive pregnancy test.

Three months later, Bianca attends again. She has managed to lose 9kg and stop smoking, and is delighted to have a positive pregnancy test.

The GP checks her urine (NAD) and BP (100/60mmHg) and confirms her pregnancy with urinalysis.

By her last menstrual period, she is approximately seven weeks pregnant. Her GP refers her for an early pregnancy ultrasound to confirm viability and makes a referral to the local antenatal clinic. He checks her eyes and tests U&Es to ensure her renal function is normal, and HbA1c, which returns a result of 6.3%.

Bianca has first trimester screening, which shows she is low risk for trisomy. Attending the antenatal clinic, she is counselled by the obstetrician and midwives regarding the risks of pregnancy in diabetes. She sees the dietitian. She decides to have amniocentesis, which shows a normal male fetus, 46 XY. At 18 weeks, Bianca has an anomaly ultrasound, which is normal, then a fetal cardiac echo, also normal. She is booked for a growth scan at 30 weeks and appointments with the diabetic team.

Her HbA1c at 30 weeks is 8.4%. She says she can't avoid 'eating for two'. This is reflected in the size of her baby on ultrasound. With an abdominal circumference >95th centile, excessive amniotic fluid index and estimated fetal weight of 4.5kg at 36 weeks, Bianca is counselled to undergo elective caesarean section.

Her insulin regimen is adjusted to ensure her sugars fall between 3.5-5.9mmol/L fasting and <7.8mmol/L postprandial. The caesarean section takes place at 38 weeks after sliding scale the night before. Delivery is uneventful and her son is born at 4.8kg.

This is an interesting trial by ACHOIS, the Australian Carbohydrate Intolerance Study. A lot of current thinking about glucose control and its effects on pregnancy outcomes are founded on this trial.

NICE has published a report on the management of diabetes in pregnancy. The website includes a quick reference guide, with checklists for preconception counselling.

1. NICE. Diabetes in pregnancy: management of diabetes and its complications from pre-conception to the postnatal period. CG63.
London, NICE, March 2008.
www.nice.org.uk/CG063