A review of established and novel therapeutic approaches for malignant melanoma, including the roles of targeted therapies and immunotherapy and potential side-effects.

But if the disease metastasises, survival is poor. Stage I disease has a five-year survival of more than 90%, but stage IV disease is only 20%.3 Collaborative efforts in basic and clinical research have investigated novel therapeutic approaches for the management of patients with metastatic melanoma. 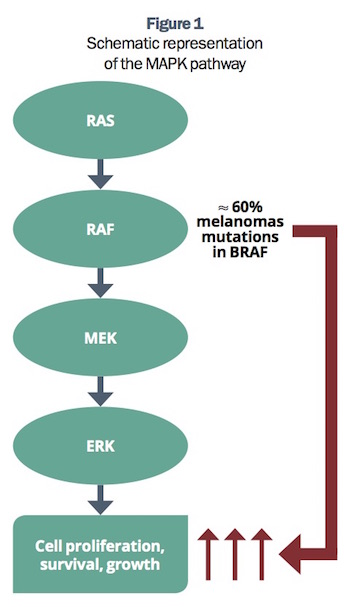 Perhaps the most important determinant of treatment modality for patients with metastatic melanoma is the presence or absence of BRAF mutations. BRAF is a deregulated cellular signalling mechanism linked to the development of melanoma.

Mutations in BRAF lead to activation of the mitogen-activated protein kinase (MAPK) signalling pathway (figure 1), which promotes cell growth, proliferation, differentiation and migration, and regulates apoptosis.4 About 60% of cutaneous melanomas have a mutation in BRAF.

The presence or absence of a BRAF mutation determines whether targeted BRAF/MEK inhibition, immunotherapy or standard treatment with chemotherapy are used.

Metastatic disease has traditionally been treated with chemotherapy, including dacarbazine5 and temozolomide,6 alone or in combination with other agents. These approaches had a response rate of about 15% (with dacarbazine)5 and a modest improvement in overall survival of 7.4 months. Combinations failed to demonstrate a significant clinical advantage.

It is now known that activation of a number of survival mechanisms and resistance to apoptosis renders this type of tumour unresponsive to conventional chemotherapy. Research has focused on the development of more specific and efficacious targeted therapies and immunomodulatory treatments. Despite this, there is still a role for chemotherapy in patients who have developed resistance to targeted agents and immunotherapy.

Vemurafenib was the first BRAF inhibitor to be licensed in the UK for patients with metastatic or unresectable stage III malignant melanoma. It has demonstrated enhanced overall and progression-free survival for patients with BRAF-mutant melanomas (5.3 months with vemurafenib versus 1.6 months with dacarbazine).7 Vemurafenib has a number of potential ?side-effects, including photosensitivity, hepatitis, skin rash, uveitis and secondary skin cancers.8

Another BRAF inhibitor, dabrafenib , was developed and is extensively used in clinical practice because of its favourable safety profile. Dabrafenib is effective in prolonging overall and progression-free survival compared with dacarbazine.9 Both vemurafenib and dabrafenib have revolutionised melanoma therapy, but their efficacy is limited by acquired resistance.10 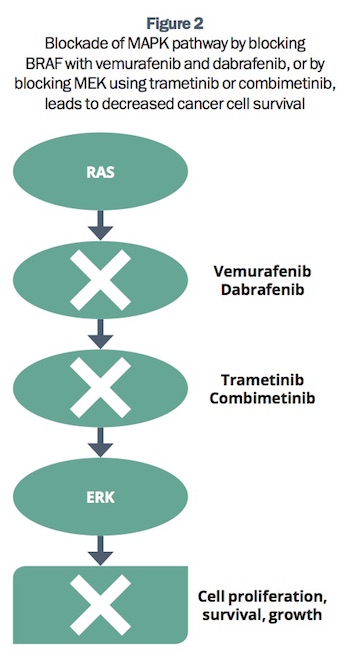 To overcome this, downstream MEK inhibitors have been developed, including the MEK1/2-specific inhibitors trametinib and cobimetinib , which have been used in combination with BRAF inhibitors (figure 2).

A dabrafenib and trametinib combination is approved by NICE for use as first-line therapy in BRAF-mutant metastatic melanoma.11 The combination has shown improved progression-free survival for patients with BRAF-mutant melanoma over a BRAF inhibitor alone (11.4 months in combination group versus 7.3 months in vemurafenib group).12-14

Both BRAF and MEK inhibitors have a wide range of potential side-effects, including pyrexia, rigors, nausea, vomiting, rash, acral hyperkeratosis, arthralgia and, rarely, decrease in cardiac function – but the combination is well tolerated.

Immunotherapy relies on activation and augmentation of immune responses that target cancer cells.15 Ipilimumab , a cytotoxic T-lymphocyte antigen 4 (CTLA-4) receptor inhibitor that enhances T-cell activity,16 was the first immunotherapy to be approved by the US Food and Drug Administration for metastatic melanoma.17 Ipilimumab has demonstrated superior outcomes over the melanoma vaccine gp100 and has an improved effect on patient overall survival.18

However, its use is limited by a number of side-effects – the most common and serious is autoimmune colitis. Diarrhoea occurs in about 20% of patients. Other side-effects include skin rash, autoimmune thyroiditis and endocrinopathies, and inflammation of the nerves and eyes.

Recent studies have highlighted novel and more effective immunomodulatory approaches. PD-1 (programmed death-1) is an important immune checkpoint receptor in activated T-cells. When PD-1 binds to PD-1 ligand (PD-L1), which is expressed on the surface of cancer cells,19 T-cell function is inhibited (figure 3).20,21 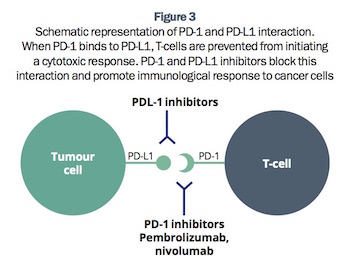 The PD-1 inhibitors pembrolizumab and nivolumab have been approved by NICE and are in clinical use for patients with metastatic melanoma.

There is growing evidence to support the use of PD-1 and PD-L1 inhibitors in patients with advanced melanoma, although response rates remain at about 30% in PD-1 monotherapy.22-25

The combination of PD-1 and CTLA-4 blockade with ipilimumab and nivolumab has also acquired approval from NICE and is the first-line treatment for patients with BRAFWT (wild type) metastatic melanoma.

The introduction of immunotherapy with nivolumab, pembrolizumab or ipilimumab alone or in combination has significantly changed clinical practice, introducing more treatment options for patients with both BRAF mutant and WT disease. These recent developments have ushered in a new era in the management of patients with melanoma, but also bring new challenges for clinicians.

There is no clear evidence on the best sequence of these treatments or management of side-effects. Several prospective clinical studies combining immunotherapy and targeted therapies or other novel targets for melanoma are under way.