The dermoscope (or dermatoscope) is a handheld 10x skin microscope. There are two kinds, oil immersion types, which touch the skin, and no-touch versions, which rely on polarised light.

Both enable a deeper and clearer view into skin lesions, yielding additional information to assist the decision-making process in diagnosing and managing pigmented and some other lesions.

My interest in dermoscopy began three years ago, after I attended a seminar by an enthusiastic consultant.

I was amazed by the hitherto unseen detail and particularly pleased when I excised a normal-to-the-naked-eye 4mm mole - referred because it was a new mole on a woman's leg - on the basis of an asymmetrical group of globules.

It was a melanoma in situ (close to 100 per cent cure rate). It looked harmless and the patient could have been falsely reassured but for the dermoscopic abnormalities. I am convinced that this inexpensive tool can save lives.

Dermoscopy addresses two crucial questions. The first is: 'Is this pigmented lesion melanocytic and, if so, could it be a melanoma?' The other is: 'Can I confidently reassure my patient the lesion is benign?'

Lesson one is to become confident with the benign. Benign lesions present at many pigmented lesion clinics and they need not. The three most common sorts are naevi, seborrhoeic warts and haemangiomas. 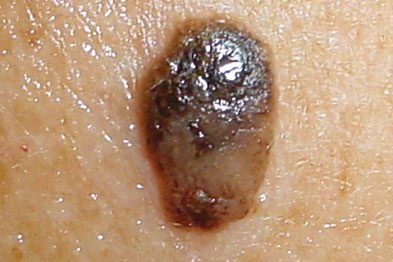 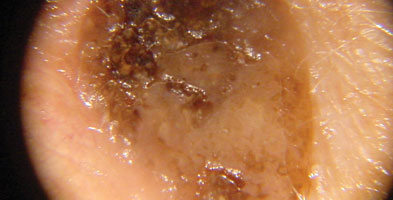 Benign naevi
A stable, regular, small naevus is unlikely to be malignant, as is anything in patients under 16. Take a history, evaluate the skin type, then apply the ABCDEF (asymmetry, border, colour, diameter, erythema/elevation, funny-looking) rule.

Then focus the dermoscope. Take your time and look for specific dermoscopic features, or their absence.

The hallmark of melanocytic lesions is the pigment network, a honeycomb-like optical effect caused by melanocytes distributed along the undulating rete ridges. A slightly darker centre is due to increased depth in the middle of the mole.

Seeing two shades of brown is acceptable as long as they are symmetrical - three colours or significant asymmetry is worrying.

Dermoscope as many moles as you can to become used to the normal, then when something malignant presents, it will look wrong.

Some moles have a more granular pigment distribution; this is acceptable if it is even, especially if the patient's other moles look the same (presumably genetic). 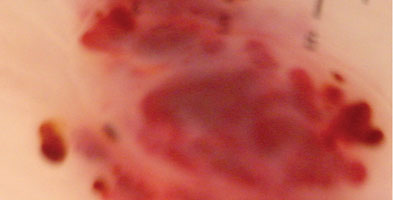 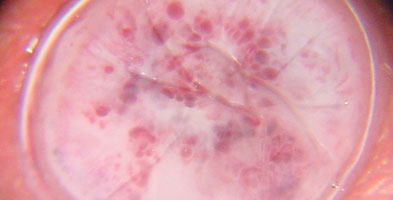 Basal cell papilloma
The other common benign pigmented lesion is the seborrhoeic wart or basal cell papilloma (BCP). A smooth edge and the lack of a melanin network, plus positive features such as comedo-like openings, fissures and crypts, and milia-like bright spots, mean that you need rarely refer.

This pigmented lesion on the back (figure 1) was referred because it had grown, was irregular in colour and over 6mm, all worrying features on paper.

The dermoscope showed a warty appearance with crypts, white keratin cysts and no melanin network - a definite BCP (figure 1a).

BCPs range from flat to nodular and blonde to black. Dermoscopically, they also vary. The cerebriform appearance is common in pale, flat BCPs and not to be confused with the melanin network of moles.

Haemangiomas
Dark, bleeding lesions are sinister, but may be haemangiomas (figures 2 and 2a). Lacunae of blood are irregular in shape, but even red in colour; unmistakeable when you have seen a few.

There is no melanin network. Note the meniscus of dermoscopy oil around the very regular lesion.

Basal cell carcinoma
Late basal cell carcinomas (BCCs) are easily diagnosed, but early ones are more easily treated. They may exhibit arborising telangiectases, ovoid nests and a small ulcer (remember to apply alcohol gel to the lens between patients to avoid cross-infection, but remember that it stings open wounds).

Ovoid nests are blue-grey, typical of pigmented structures in many BCCs.

Melanomas
The thin melanoma (figure 3) shows at least four colours, scar-like depigmentation and gross irregularity throughout. This man's wife was worried about it and nagged him to see the doctor, a warning light for me.

The key fact about cancer is that random DNA changes lead to loss of control, so melanomas have chaotic dermoscopic features, including three or more colours, blue-white veil (known as the 'spilt milk sign'), broadened pigment network, scar-like depigmentation and irregular dots and globules.

Full discussion of these and other features is impossible here: you need a book and a course.