0.5 CPD Credits Click here to take a test on this article and claim your certificate on MIMS Learning

In the past two years, this 48-year-old man, who was otherwise fit and well and had no past dermatological history, developed areas of excessive scaling on his scalp. These areas were only mildly itchy and he had no other cutaneous manifestations of disease and no intercurrent health problems. The patient was not taking medication.

Clinical features, differential diagnosis and management
This condition, which manifests as excessive scaling of the scalp, produces characteristic thick shards of silvery yellow scale that adhere firmly to the hair shafts.

The term ‘amiantacea’, from the French word ‘amiante’, means asbestos-like. The condition can be a manifestation of dermatitis (seborrhoeic or atopic), psoriasis or tinea capitis, but can also be idiopathic.

Women are affected more than men and the condition is more commonly seen in children and adolescents. Tinea infection needs to be excluded.

Treatments include softening the scales with olive oil or keratolytics, antifungal shampoos, such as ketoconazole, and topical steroids. If it responds to treatment, complete and permanent resolution can often be achieved. 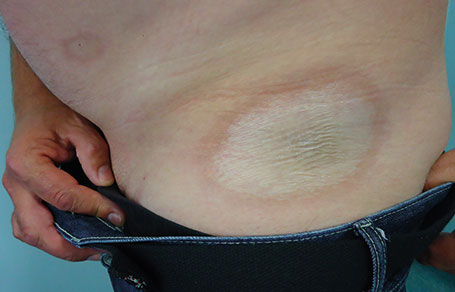 This otherwise fit and healthy 47-year-old man developed a gradually expanding annular patch on his left lower abdominal wall. It has evolved over about nine months to the clinical appearance seen here. During that time, he developed a further four annular lesions asymmetrically distributed around his trunk. These were entirely asymptomatic.

Clinical features, differential diagnosis and management
This is a relatively rare, persistent condition of unknown aetiology, where the skin becomes excessively thickened. Deeper tissues, including bone and rarely, organs, can become involved.
It is two to three times as common in women, with a peak incidence around the age of 20-40 years.

The thickening is caused by an increase in the collagen and extracellular dermal matrix, with initial damage to blood vessels leading to fibrosis.

It classically presents as an initially mauve annular patch or plaque, which can vary in size from 1cm to 20cm. This develops a characteristic ivory white colour centrally, with a mauve periphery, which can in time fade to brown.

It is usually asymptomatic if the skin alone is affected. Activity can grumble on for several years, ultimately burning out. The average period is three to five years. There may be persistent brown discoloration and sometimes depression of the skin.

A biopsy can be considered if there is clinical uncertainty. Many treatments have been tried but none are reliably effective. Topical options include calcipotriol, superpotent steroids and calcineurin inhibitors. 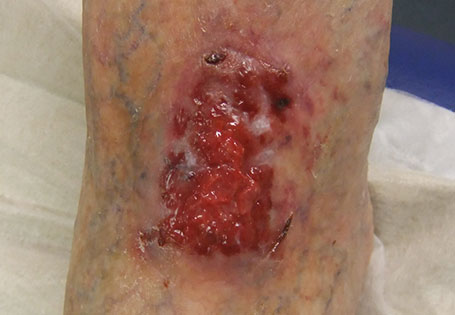 This 83-year-old woman presented with a deep, painful ulcer of six months’ duration on the dorsal aspect of her left forefoot. She had a number of comorbidities, including IHD, but no past history of leg ulceration. She was taking a number of medications, including nicorandil, which had been introduced some 18 months previously.

Clinical features, differential diagnosis and management
It has been well established that the anti-anginal medication nicorandil can cause different types of ulceration. Initially, aphthous ulcers were recognised and incidences of up to 5% of patients have been reported.

More recently, other patterns of ulceration, including painful perianal, perivulval and peristomal ulcers and GI ulceration, have been recognised. It has also been implicated in delayed healing of wounds.

The mechanism remains unclear. Both sexes are equally affected and ulceration can develop within weeks, but also as much as two years after the introduction of the drug, making the causal link more obscure.

The risk appears to be dose related, occurring most commonly with high-dose regimens or arising for the first time after an escalation of dose.

Patients with diverticular disease are at risk of perforation or fistula formation. Patients coprescribed steroids and NSAIDs are also at high risk.

The ulcers are characteristically painful, deep and localised. Histology shows no evidence of granulomas or vasculitis.

On withdrawal of medication, the pain usually resolves promptly and healing ensues but can take many months. 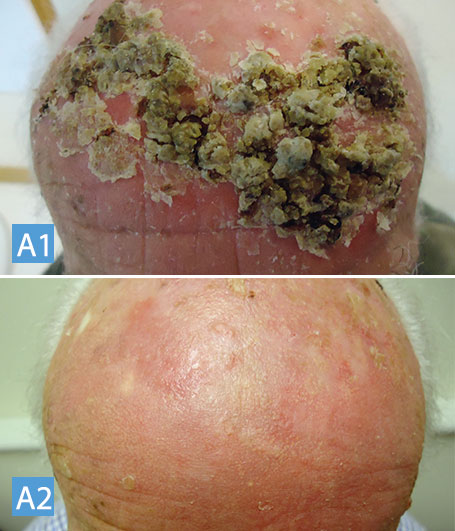 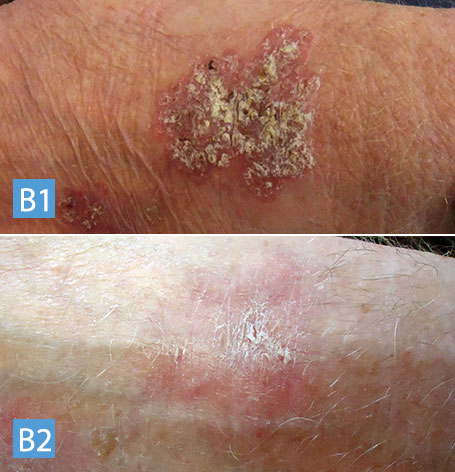 A wide array of topical chemotherapy agents are now available for skin dysplasia, premalignancy and malignancy, which is a rapidly escalating problem given the population demographic.

These agents can be very useful for dealing with the lower risk end of the spectrum of skin cancer. Two cases are illustrated here to show the effectiveness of these agents.

Case A: Actinic scalp damage
This 84-year-old man presented with very extensive field change actinic damage to his scalp. This was treated with some gentle descaling, following soaking in olive oil, then the application of 5-fluorouracil cream on a once-daily basis for four weeks. Figures A1 and A2 show the clinical picture at presentation and then at four weeks.

Case B: Bowenoid keratosis
This is an area of persistent Bowenoid keratosis on the dorsum of the wrist of a 65-year-old retired coastguard with skin type 1. Again, 5-fluorouracil cream was the treatment of choice. This was applied twice daily for a four-week period and figures B1 and B2 show the clinical presentation and outcome.

Neither patient suffered any significant adverse side-effects and neither required any adjuvant treatment, such as hydrocortisone for the skin reactions. An excellent reference guide, particularly for the use of the increasing number of topical therapies for actinic keratoses, is available on the Primary Care Dermatology Society website.

The MDU's Dr Kathryn Leask explains how the expansion of the medical examiner system...

The COVID-19 booster programme will begin in care homes and for housebound patients...