SECTION 1. NORMAL VARIANTS
The aim of this article is to assist in assessment of patients with pigmented or 'black/brown' skin, defined broadly here to include people of African, African-American, African-Caribbean, and Indian or Australasian origin.

Key points should be remembered when assessing skin disease in pigmented patients:

Normal variants
Patients with pigmented skin sometimes present with skin problems that occur so commonly that they are considered to be normal variants.

These include small palmar pits in the skin creases of black patients, asymptomatic pigmentation on the oral mucosa or nail pigmentation, which may be seen as dark, longitudinal bands, or diffuse red-brown pigmentation following use of henna.

There are considerable racial and familial variations in the degree of pigmentation of the eyelids. Darkening of the skin around the eyes (periorbital hyperpigmentation) is not uncommon in the IndoAsian population.

Familial periorbital hyperpigmentation is determined by an autosomal dominant gene, and increased pigmentation is first noted below the lower eyelids at the approach of puberty.

Other variants are hyperpigmented macules on the soles of feet; Futcher's or Voigt's line of demarcation between dark and light skin on the upper arm and hyper- or hypopigmentation over the sternum.

SECTION 2. SKIN DISEASES
Disorders of skin pigmentation are noticeable in deeply pigmented skin and pose particular problems for these patients.

Primary disorders
Vitiligo (see photo) affects all races, but in pigmented skin it is disfiguring and can be devastating.

There is complete pigment loss and the depigmented patches are smooth, totally white and sharply demarcated, distinguishing it from post-inflammatory hypopigmentation where there is partial pigment loss and lesions are lighter than the normal skin but not completely white.

Areas subject to repeated friction and trauma are likely to be affected by vitiligo, for example dorsa of hands, feet, elbows, knees and ankles. It is often remarkably symmetrical.

With treatment, usually topical corticosteroids or phototherapy, islands of re-pigmentation may occur, giving a speckled appearance; it is important to warn the patient about this.

Patients with extensive, generalised vitiligo may have only a few remaining islands of normal skin and, in this situation, the monobenzyl ether of hydroquinone is sometimes used to induce irreversible bleaching of the normal skin.

It is important to remember that the depigmented skin of vitiligo, even in dark-skinned patients, is susceptible to sunburn and sunscreens are vital.

This disfiguring pigmentation can develop with many inflammatory diseases including acne, psoriasis, atopic dermatitis and drug eruptions.

It can be severe in diseases affecting the basal layer of the epidermis, such as lichen planus and lupus erythematosus.

The lesions are characteristically limited to the site of the preceding inflammation and have indistinct borders. Patients should be informed that the post-inflammatory hyperpigmentation may persist. Early recognition and treatment of these diseases is important.

Some inflammatory skin diseases commonly lead to post-inflammatory hypopigmentation. A good example is pityriasis alba, which commonly presents with hypopigmented, somewhat scaly patches with poorly defined borders on the face (usually cheeks) of children with pigmented skin. Apart from reassurance, no treatment is needed.

Post-inflammatory hyper- and hypopigmentation can also be seen together, for example in pityriasis versicolor, which is a chronic scaly disorder caused by the superficial overgrowth of the yeast Malassezia furfur.

Patients are usually asymptomatic and present with cosmetic concerns about the blotchy pigmentation.

This condition is characterised by well-demarcated macules, of variable pigmentation and size, occurring most commonly on the trunk. It is sometimes mistaken for vitiligo, but vitiligo is not scaly. The fine scaling is best appreciated by gently scraping the lesions with a scalpel blade.

In a patient presenting with hyper- or hypopigmentation, the underlying primary disorder may be less obvious than in white skin.

It is, therefore, of great importance to take a careful history, asking specifically about itching and preceding redness (indicating inflammation), scaling, family history and associated atopic or autoimmune diseases.

SECTION 3. DIFFERENCES IN SKIN DISEASES
Erythroderma - a serious and potentially life-threatening skin reaction with generalised erythema - may not be as obvious in pigmented skin as in white skin.

Patients will have fever, shivering and malaise and need admission to a specialised unit.

Common inflammatory disorders may look different in pigmented patients compared with white skin, but there are often clues on history and examination that will help diagnosis. 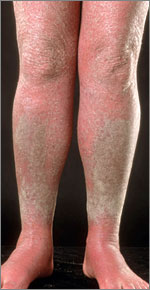 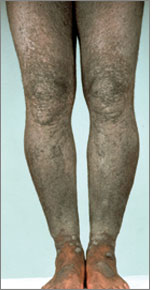 Racial differences
A number of skin diseases occur more frequently in racially pigmented skin. Cutaneous sarcoidosis is common in black Americans, and typical lesions in this group include hypopigmented macules and papules, keloid-like lesions, ulcerative, verrucous and large nodular forms, although skin lesions can be of variable morphology.

Nodular lesions are often annular and violaceous in colour as opposed to the reddish-brown seen in white skin. The term lupus pernio refers to lesions on the nose.

Racially-pigmented patients are more likely to develop keloids, either spontaneous or induced by trauma, than white patients. Keloids may be asymptomatic, painful or itchy and can cause cosmetic disability.

Pseudofolliculitis barbae is common in black men. Shaving the stiff, curved hairs produces a sharp tip, which then curls round and penetrates the skin of the beard area to set up a foreign body reaction, resulting in pustules and sometimes prominent post-inflammatory hyperpigmentation.

Acne nuchae keloidalis is a disease that is nearly always seen in black men, usually during their late teens, and is similar to pseudofolliculitis barbae.

Firm papules develop on the nape of the neck or in the hair-bearing occipital region and later coalesce to form keloidal bands with scarring alopecia.

In chronic cases there may be subcutaneous abscesses with draining sinuses. Acne keloidalis can be difficult to treat.

Acanthosis nigricans, in which there is hyperpigmentation and hyperkeratosis of the flexures, can be paraneoplastic, but it is also associated with obesity, hyperinsulinaemia and diabetes mellitus and in this scenario it is commonly seen in IndoAsian patients.

Localised cutaneous macular amyloidosis is more common in Asian people and may be misdiagnosed as post-inflammatory hyperpigmentation.

It is characterised clinically by pruritic grey-brown, reticulated macules occurring principally on the upper back.

The pigmentation often has a distinctive rippled pattern which, together with the absence of preceding inflammation, helps to distinguish it from post-inflammatory hyperpigmentation.

A diagnostic skin biopsy should be performed before initiating topical steroid treatment. It is important to reassure patients that this condition is confined to the skin with a good prognosis, and is unrelated to systemic amyloidosis.

Erythema may be minimal but the presence of scaling and regional lymphadenopathy will help in making the diagnosis.

It is important to send specimens, including plucked hairs and skin scrapings, for direct microscopy and fungal culture to confirm infection and identify the causative organism.

Systemic antifungal agents are required and should be continued for at least three months.

Left untreated, permanent scarring alopecia may result, particularly if there is a kerion.

SECTION 4. CULTURAL PRACTICES
'Cupping' is a commonly practised medical treatment in Oriental countries and parts of Eastern Europe, and is used increasingly in the west with migration of populations.

It is performed by warming the edge of a cup and applying it to the patient's back. Suction is produced when the cup cools, leaving hyperpigmented areas, which can look like bruises.

Cupping is often combined with acupuncture and a number of complications have been reported, such as panniculitis.

Black women often straighten their hair by hot combing or chemical methods such as alkaline reducing agents (caustics) and ammonium carbonate. These practices are associated with structural damage to the hair and follicle and can lead to breaking of the hairs and scarring alopecia.

Traction alopecia (see picture) is caused by repeatedly tying the hair too tight, which pulls on the follicles. It is seen in black women who braid their hair.

Black-African hair is brittle and many patients apply greasy creams (pomades) to make it more manageable.

This can be associated with pomade acne due to occlusion of the hair follicles, and is seen on the forehead and temples.

Detailed history
It is important to ask all patients with skin problems about medications they take, including any OTC treatments.

It is not uncommon for patients with pigmented skin to use skin-lightening products, many of which will contain hydroquinone, which irreversibly damages melanocytes (see vitiligo).

Hydroquinone can paradoxically lead to an increase in skin pigmentation, known as exogenous or acquired ochronosis. OTC skin-lightening creams may contain other ingredients, such as corticosteroids.

Some patients obtain these products abroad but imported products are available in the UK in inner-city markets.

This article was originally published in MIMS Dermatology. To subscribe to the journal visit www.hayreg.co.uk/specials.

GPs should carry out 45% of consultations remotely after pandemic, says Hancock

Nearly half of GP consultations should continue to be delivered remotely after the...

The government’s plan to exit the national lockdown is ‘full of risks’ and could...