Lower limb venous disease affects more than 50% of the adult population, accounting for 1-2% of total healthcare spending,(1) with varicose veins (VV) and venous ulcers comprising the majority of this group.

Restrictions in healthcare spending have led to a reduction in NHS treatment of VV, despite evidence that it may improve quality of life.2

Additional perforating veins in the thigh and calf allow further communication between these systems. Unidirectional venous flow is maintained by the presence of venous valves and the calf muscle pump provided by the contraction of calf muscles.

Failure of valves within superficial veins or at the junction with deep veins can lead to reversed blood flow in veins (reflux or incompetence) and result in skin changes associated with chronic venous insufficiency (CVI).

The causes of venous incompetence are multifactorial,3,4 but most are due to failure of valves, due to degenerative or developmental weakness. Secondary VV can arise following DVT.

This is absent in complicated patients, leading to high AVPs with consequential skin change.1

Patients may have concerns that developing VV increases their risk of DVT or venous ulceration, and can be reassured that the presence of VV alone rarely leads to such complications.

Complicated varicose veins
Once AVPs become elevated, patients may develop CVI, with resultant skin changes (see table 2). These often appear in the gaiter area around the medial malleolus. All patients with complications should be investigated for VV and referred to a vascular surgeon for consideration of intervention.6 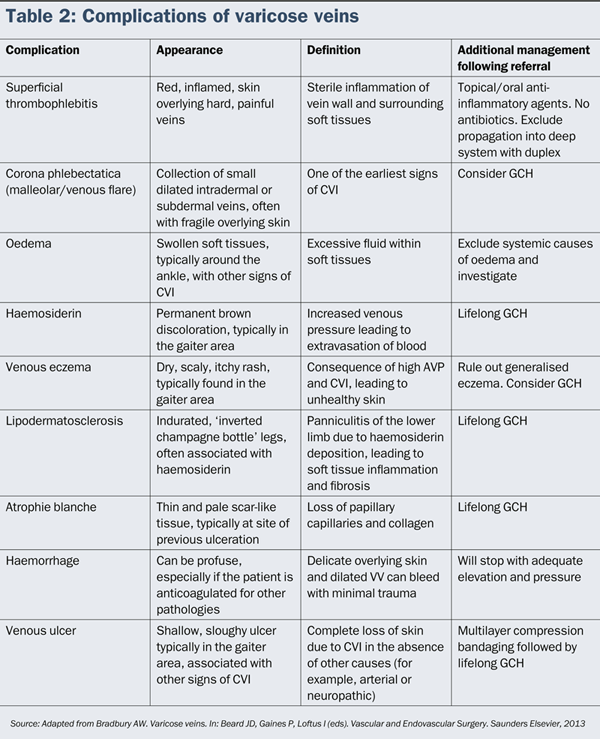 Examination of the legs with the patient standing will determine distribution and sequelae VV.

If peripheral pulses are absent, an ankle brachial index pressure (ABPI) should be obtained.

Investigations
Duplex ultrasound is the gold standard modality for evaluation of venous incompetence.

In addition to its non-invasive nature, its advantages include assessment of the deep system, accurate mapping of all refluxing veins and sites of reflux, determination of duplex systems, large tributaries and perforators (causes of possible recurrence), and determination of tortuosity, proximity to skin and diameter of veins which implicate options for endovenous ablation (EVA).

Current treatment
Wide regional variations exist in the management of VV across the UK, in part due to an inability to identify those patients who will benefit most from treatment, and there is at present no established NHS framework for the diagnosis and management of the condition.6

In addition to technical aspects, successful treatment depends on excellent communication and management of patients' expectations.

Patients presenting with cosmetic concerns about their veins are a more difficult group to manage in the NHS, and may be treated in the private sector. Weight loss and moderate exercise can improve symptoms in some patients.

This is the treatment of choice in pregnancy, or in patients where intervention is inappropriate, but should not be used as a primary treatment, because evidence for its efficacy in improving patients' symptoms and quality of life is weak.6

In uncomplicated patients, class 1 GCH may be adequate, but class 2-3 is required for those who have complications.7

Most patients will only require below-knee stockings, which may improve compliance.

Patients with venous ulcers are typically treated with four-layer compression bandaging to achieve ulcer healing, before any contemplated intervention.8

Surgery
Surgery for LSV VV typically involves ligation of the SFJ ('high tie'), stripping of the LSV to below the knee and multiple stab avulsions.

Treatment is similar for the SSV, but without stripping, because of its close proximity to the sural nerve.

New developments
EVA is now the primary treatment. This involves passing a catheter into the vein, with various methods used to damage the vein wall, causing fibrotic occlusion.

Thermoablative (laser, radiofrequency), mechanochemical (Clarivein) or sclerotherapy (liquid, foam) techniques can all be used.10-12 These are comparable to surgery for primary failure and recurrence, but are associated with less haematoma, infection and pain, with quicker return to normal activities.13,14

NICE guidelines suggest referral to the vascular service if patients have any of the following:

There is good evidence that quality of life is improved in patients with uncomplicated and complicated VV following surgery.2,15

VV recurrence following surgery has been reported at 20-60% and may be due to inaccurate initial diagnosis or surgery, disease progression, altered venous dynamics or neovascularisation.16,17

Although it has been estimated that only 3-6% of patients with untreated VV go on to develop ulceration, there is a lack of evidence regarding the progression of VV from stage C2 or C3 to more serious stages.6

A previously fit and well 34-year-old female hairdresser presented to her GP with left leg VV.

They had been present since the birth of her first child 10 years ago and were associated with dull aching pain, particularly at the end of the day and around the time of her menstrual period.

On examination, VV were found in the LSV distribution, with a patch of dry, itchy skin around the left medial malleolus.

The GP offered the patient a referral to the vascular outpatient clinic for further evaluation and consideration of intervention. However, she declined as she did not want to take any time off work. She was therefore fitted with a class 2, below-knee, graduated compression stocking.

She wore this daily, with good symptomatic relief.

She presented 12 years later with a small ulcer at the site of the previous venous eczema. There was now haemosiderin deposition, with associated lipodermatosclerosis.

The patient was referred to the vascular clinic, where a venous duplex demonstrated a patent and competent deep system, with an incompetent left SFJ and LSV, associated with grossly dilated incompetent calf varicose veins.

She had easily palpable foot pulses and an ABPI of one, and was therefore put into four-layer compression bandaging.

This was changed on a weekly basis by the district nurses and after four months, her ulcer had healed and she was offered surgery to treat her incompetent superficial veins.

Postoperatively, she had some minor residual veins, with bruising and numbness at the site of surgery, which she had been warned about beforehand. All of these settled down after several weeks and she continued to wear a compression stocking thereafter.

This study demonstrated that ulcer healing time was not improved by venous surgery, but surgery did significantly reduce the rate of venous ulcer recurrence following healing.

This meta-analysis of 27 RCTs comparing EVA to surgery found EVA similar to surgery with respect to primary failure and recurrence, but significantly better regarding haematoma formation, wound infection, pain and return to normal activities.

2. Sam RC, Darvall KA, Adam DJ et al. A comparison of the changes in generic quality of life after superficial venous surgery with those after laparoscopic cholecystectomy. J Vasc Surg 2006; 44: 606-10.