Turner syndrome (TS) was first described by Ullrich in 1930 and Turner in 1938. It is a phenotypically heterogeneous disorder of females, occurring in one in 2,500 to 3,000 live-born girls. TS occurs sporadically and is seen equally in all ethnic groups.

In the somatic cells of normal females (46,XX), one of the X chromosomes is silenced, a process known as lyonisation. In these inactive X chromosomes, about 20-25% of genes continue to be expressed. TS is caused by loss of the entire X chromosome (46,X) or a portion of it that includes the expressed genes.

TS is the most common chromosomal disorder in females, with a 45,X karyotype, present in 1-2% of fetuses.

Over 99% of these fetuses undergo spontaneous loss before 30 weeks. About 15% of spontaneous terminations of pregnancy and 1% of stillbirths have a TS karyotype.  Despite the spontaneous loss of most TS fetuses, it is the only monosomy (when one member of a pair of chromosomes is absent) that is compatible with life.

TS is genetically heterogeneous. About 50% of cases have monosomy of the X chromosome because of non-disjunction during gametogenesis, resulting in a 45,X karyotype.

TS is characterised by short stature and premature gonadal failure. Short stature is explained partly by aneuploidy (an abnormal number of chromosomes) and partly by haploinsufficiency (only one functional gene copy) of the short-stature homeobox-containing gene on the X chromosome (SHOX). SHOX is present on the tip of the X chromosome, a region that escapes the normal process of inactivation.

Skeletal deformities can result from haploinsufficiency of SHOX, overlapping with Leri-Weill dyschondrosteosis, which is caused by mutations in SHOX.

Premature ovarian failure results from haploinsufficiency of genes located in the long arm of the X chromosome. Ovaries are normally formed in TS, although most have exaggerated oocyte death, leading to premature ovarian failure and formation of fibrous ovarian streaks. Haploinsufficiency of various other genes within the X chromosome accounts for lymphatic (Xp11.4), cardiovascularand neuropsychiatric (Xp22.3) problems.

Mosaicism is common and phenotypic features can be mild, so the age of presentation varies (see Table 1).1 Usually patients with TS are diagnosed during childhood when they present with short stature.

Antenatally, the diagnosis is usually based on the finding of fetal oedema and cystic hygroma on ultrasonography, abnormal levels on maternal triple screening, or abnormal results of fetal karyotyping performed because of advanced maternal age.2

Lymphoedema in a neonate points towards a diagnosis of TS. Other manifestations of lymphatic abnormalities include webbing of the neck, low posterior hairline, nail convexity and dysplasia.

Congenital heart defects occur in 30% of patients, which includes bicuspid aortic valve in 30-50%, coarctation of the aorta in 30% and aortic dilation in 5%. Renal anomalies are present in 30% of TS patients, with horseshoe kidney and duplex collecting system being most common.

Otitis media is common in TS and patients may present to GPs with recurrent middle ear infections and glue ear. Patients may also present with conductive and sensorineural hearing loss.

Patients with TS have an increased propensity to develop autoimmune disorders.  Most common are primary hypothyroidism because of Hashimoto thyroiditis, coeliac disease and type 1 diabetes mellitus.

There is growing evidence that women with TS have a lower bone mineral density and are at increased risk of osteoporotic fractures around two to three decades earlier than with postmenopausal osteoporosis. Oestrogen replacement can improve bone mass although the optimal dosage for this outcome has yet to be elucidated.3

The prevalence of learning and behavioural problems may be higher in patients with TS and some patients with ring chromosomal abnormalities may have significant learning difficulties but the average IQ is in the normal range.

A list of phenotypic features seen in TS and their frequencies are summarised in Table 2.2,4

Any girl who presents to a GP with unexplained short stature, primary or secondary amenorrhoea, or any other constellation of clinical and phenotypic features mentioned above should be referred to a secondary or tertiary endocrine service to have a karyotype to rule out TS.

Cytogenetic studies from cultured lymphocytes extracted from peripheral blood are used to diagnose TS. Mosaicism is common in TS, so a minimum of 30 cells are counted. Fluorescence in situ hybridisation studies are required to identify a Y chromosome containing cell line in TS patients who present with virilisation.4

Once the diagnosis is confirmed, the patient's family is offered genetic counselling, psychological support and a multidisciplinary approach to discussing management plans.

Managing TS can be challenging because of the constellation of potential abnormalities. TS patients should therefore be managed in centres with experience of the condition and the ability to call on a range of specialist opinions, alongside shared care with the GP.

Genetic counselling and early referral to a clinical psychologist should be discussed with the family because a diagnosis of TS can have substantial psychosocial impact on the patient and their family.

Typically, a tertiary paediatric endocrinologist co-ordinates the patient's care and their role is described in detail below.  The role of other specialists is summarised in Table 2.

Investigations and referral of TS after diagnosis during childhood, transition and adulthood is summarised in Figure 1.2,4,5

Figure 1: Investigations and referral of TS (click on the image below for a larger version) 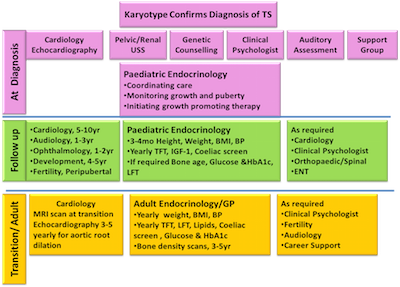 Treatment with rhGH starts after diagnosis or as soon as growth failure is demonstrated. NICE recommends rhGH treatment as a licensed indication for treating short stature in patients with TS. The dose is typically about 40-60 microgram per kg per day.

Treatment with rhGH also improves body composition and bone mineral density in patients with TS. Treatment continues until cessation of growth, which occurs at 14-16 years depending on pubertal development.

Patients are reviewed every three to four months to monitor their growth, adjust dose and identify any potential complications of growth hormone treatment. Complications of treatment could include headaches secondary to benign intracranial hypertension, hip pain due to slipped capital femoral epiphysis and development or rapid worsening of scoliosis. Insulin-like growth factor-1 (IGF-1) is measured at least once a year to monitor the dose and prevent overzealous treatment with rhGH.

Recent studies have demonstrated that the addition of oxandrolone (a non-aromatisable anabolic steroid) in the peripubertal period accelerates growth and improves final height. A meta-analysis of these studies has suggested that oxandrolone be added in children with TS who are severely short for age or in whom growth rate is modest with the use of rhGH alone, with a suggested dosage of 0.03-0.05mg/kg/day starting from 8-10 years of age.7

Side effects were shown to be modest at these doses, and included transient delay in breast development and rarely virilisation (characterised by clitoral enlargement and deepening of voice). However, short stature in TS is not a licensed indication for the drug.

Currently this combination is reserved for patients with TS in whom delayed pubertal induction is not acceptable.7

In the UK, most paediatric endocrinologists use oral estradiol for pubertal induction (see Table 3). Transdermal estradiol patches and gel can also be used. Once menarche is established, HRT is continued to maintain the effects of estradiol, with breakthrough bleeding in a schedule acceptable to the patient.

Gynaecologists specialising in adolescence can assess a patient’s potential for spontaneous or assisted pregnancy. Controlled ovarian stimulation and oocyte cryopreservation may be an option in selected adolescents with TS mosaicism and impending ovarian failure.4

Overall mortality is raised threefold in patients with TS, compared with the general population. Circulatory disease is the largest contributor (41%) and respiratory disease the next largest (13%).5

Within the field of circulatory disease, mortality is highest for aortic aneurysm and aortic valve disease.5

Mortality is increased from all major causes and at all ages, with the greatest rate of excess mortality in older adulthood.5

Women with TS should be followed in dedicated multidisciplinary clinics that have experience of managing the adult complications of TS, with the focus being on preventive healthcare.9

The most serious risk for women with TS is aortic dissection. Risk factors for dissection, such as hypertension, bicuspid aortic valve and dilated aortic root, should be identified and managed.9

Specialist management is required throughout the patient's life, but the role of the GP is very important. In supporting patients with chronic disease, there is an opportunity to establish a relationship with patients and their family and to impart healthy lifestyle choices which could prevent the metabolic complications associated with TS.

Lifestyle interventions, such as smoking prevention/cessation, weight management and psychosocial matters, are best dealt with in primary care.

A seven-year-old girl was referred to the tertiary endocrine service for investigation and management of short stature.

The girl was born at term weighing 5lb. Her initial feeding difficulties had resolved by four months. She was always short, but this became more noticeable when her five-year-old sister grew taller than her.

The patient was otherwise healthy and doing well at school, with a little help in numeracy.

The child had a history of recurrent middle ear infections, for which she required multiple courses of antibiotics. She had bilateral grommet insertion for glue ear at four years of age.

Originally, baseline investigations for short stature and endocrine investigations, including a growth hormone stimulation test, were reported as normal. A diagnosis of constitutional delay of growth and puberty was made.

On assessment, the girl's height was below the 0.4th centile and her weight was on the ninth centile. Her parents were tall and her target height, adjusted for parental height, was on the 75th centile.

She was chubby, with no dysmorphic facial features, and had multiple naevi on her face and back.  She also had a mild increase in the carrying angle of her forearm.

The family was informed of the diagnosis of TS in the presence of a clinical psychologist. They were also given details of the Turner Syndrome Support Society (www.tss.org.uk).

The patient was booked for pelvic and renal ultrasound scans, and referred to the cardiologist for echocardiogram and the urologist for discussion of gonadectomy in view of the Y cell lines in her chromosomes. Growth hormone was commenced to promote her growth. In subsequent clinic appointments her height, weight and BP were monitored.

As in this case, patients with TS may not present with the classic phenotype, especially if they have mosaicism. Any girl who presents with short stature and a height below their target centile should have a karyotype to exclude TS.

This is an updated version of an article that was first published in April 2012.