Every year in England approximately 20,000 people will have their first transient ischaemic attack (TIA)1 with an incidence rate of 0.5 in 1,000.

A large proportion of TIAs go unrecognised, with about half never coming to medical attention.2 Cerebrovascular disease is the third largest cause of death in England. It is the leading cause of disability in England, commonly affecting communication, motor function and sensation. Major strokes are often preceded by TIA, but are often not recognised by patients, so not reported.

The care of patients with TIA has improved dramatically in the past decade, with work focusing on early recognition and prevention of more disabling events. An understanding of the different mechanisms is crucial to treatment and prevention.

TIAs are caused when a blood vessel within the brain is blocked, either by thrombus or material from an atherosclerotic plaque. Cells die within the brain due to ischaemia, resulting in the clinical presentation.

Classification
TIA and stroke differ in terms of symptom duration, with TIA typically lasting for less than an hour. However, the aetiology and epidemiology are the same.

The classification for stroke is valuable in understanding the pathophysiology of TIA.

A diagnosis of TIA warrants urgent assessment by a specialist. All patients with ongoing symptoms suggestive of stroke rather than TIA should be urgently transferred to hospital.

TIA is a sudden onset of transient focal neurological deficit, often lasting for only a few minutes, although the definition is for all symptoms and signs to have completely resolved within 24 hours. Patients will often present late and, therefore, the diagnosis needs to be made on history rather than examination and investigation.

Differential diagnoses
In TIA, symptoms result from a sudden change in vascular dynamics, so they will be of sudden onset. Description of an insidious onset is not suggestive of TIA. The symptoms are also maximal at the time of onset followed by a gradual recovery. Symptoms that stutter or are intermittent are less suggestive of TIA and may represent other important diagnoses, such as migraine, tumours or demyelination. Symptoms that last for a few seconds and recurrent, frequent, stereotypical events are also unlikely to be due to TIA, and alternatives such as focal epilepsy should be considered.

Many have the perception that headache is part of a TIA syndrome. While the presentation of headache also warrants careful evaluation, isolated, severe headache is rare in TIA and more likely to be migraine.

The pattern of symptoms can help to reach a diagnosis. Symptoms relating to a specific neurological vascular territory are supportive of TIA. For example, unilateral weakness and aphasia, or visual field defects with other posterior circulation symptoms such as ataxia and dysarthria.

Investigations
Patients with suspected TIA should receive aspirin immediately unless contraindicated, and have some initial basic investigations, most importantly a blood glucose, routine observations (pulse and BP) and ECG. The subsequent assessment, either in primary or secondary care, should include a stroke risk ABCD2 score (see table).3 This stratifies patients into high-risk (ABCD2 scores of four or more) and lower-risk patients. Many hospitals offer a daily TIA assessment service for patients requiring urgent or other hospital admission. Those at lower risk can be referred to a TIA clinic, where they should be seen, assessed and management instituted within seven days.3

Further investigations will be based on risk stratification and exclusion of differential diagnoses. This includes a full blood work-up and possible brain imaging. Diffusion-weighted MRI is the imaging modality of choice. It should be performed within seven days in low-risk patients and within 24 hours for those at high risk. When MRI is not possible, CT can be used. CT is especially useful in identifying haemorrhages and space-occupying lesions. It is reasonable not to perform brain imaging when the history is suggestive of migraine or metabolic derangement. The work-up will also include cardiac investigations to define the aetiology and facilitate appropriate treatment.

All patients with suspected TIA should have Doppler ultrasonography looking for carotid and vertebro-basilar disease. A Holter monitor and echocardiogram may be necessary.

The diagnostic work-up and management of TIA should be the same as with stroke but, in the case of TIA, risk stratification allows the decision of where and how quickly a specialist referral should be made.

It is essential that all patients undergo aggressive risk factor management (see box). Lifestyle advice should target as many of these risk factors as possible. Patients in whom TIA is suspected must be advised not to drive for one month or until further discussion in a TIA clinic.

Treatments with antiplatelet medication, antihypertensives and statins have been investigated, showing a potential reduction in stroke rate if introduced early.3 Some specific interventions are discussed below.

Antiplatelets
The use of aspirin in patients with previous TIA or stroke has been shown to reduce the risk of subsequent vascular events by 13%.4 Aspirin 300mg as a single dose should be started while investigations are pending.

Although occasionally TIA can be due to a small intracerebral haemorrhage, this is uncommon and it is reasonable to commence an antiplatelet drug without prior brain imaging.

The NICE recommendations for antiplatelet therapy after stroke are long-term combination of aspirin 75mg once a day (or clopidogrel if aspirin not tolerated) and dipyridamole modified release 200mg twice a day.

However, most stroke physicians cannot see a reason to adopt a different approach to antiplatelet therapy in TIA from that for stroke because they are clearly the same disease.

As a result, the forthcoming edition of the National Clinical Guidelines for Stroke support the use of clopidogrel first line after a TIA, only using the aspirin and dipyridamole combination if the patient is unable to tolerate clopidogrel.

Antihypertensives
Antihypertensive treatment is recommended for both the prevention of recurrent stroke and other vascular events post TIA. The absolute BP target should be individualised (more rigorous control in patients with diabetes). Observational studies and clinical trials support BP reduction for secondary prevention regardless of the initial BP.

Although the optimal drug regimen remains uncertain, available data from trials such as PROGRESS support the use of diuretics and the combination of diuretics and ACE inhibitors.5 Benefits have been linked to absolute BP reductions of approximately 10/5mmHg.6

Hypercholesterolaemia
Cholesterol-lowering drugs have been shown to be beneficial for both primary and secondary prevention.7

This should be tackled with dietary modification and the use of a statin if total cholesterol is over 3.5mmol/L.

Diabetes
Tight glucose control is important in patients with diabetes with TIA or ischaemic stroke, to reduce microvascular and macrovascular complications. The HbA1c should be optimised to below 7%.

Smoking
Smoking increases the risk of stroke by about 50%. As a result, all TIA and ischaemic stroke patients should be encouraged to stop smoking and be signposted to smoking cessation services.

Carotid endarterectomy
Carotid endarterectomy is indicated in patients with TIA or stroke with a symptomatic carotid stenosis of 70-99%. Surgery needs to be performed as soon as possible after the TIA, with evidence suggesting that by 12 weeks, medical treatment is as effective at preventing recurrence as surgical.8

Anticoagulation
AF contributes to about 15% of ischaemic strokes and TIA. To date, anticoagulation with warfarin has been the mainstay of treatment, with risk-stratification tools such as CHAD2Vasc highly effective. Warfarin is more effective than aspirin.9

Newer anticoagulants, such as dabigatran (factor Xa inhibitor), which do not require monitoring, are emerging; however, they are more costly and have the disadvantage of being irreversible, should life-threatening bleeding occur.

The prognosis of TIA and stroke is related to a timely diagnosis, referral to a specialist service and initiation of treatment, including secondary prevention.

The key factor in terms of the prognosis of TIAs is the risk of stroke and other vascular events such as MI and stroke following this first incident.10

Risk of stroke
More than 20% of strokes are preceded by a TIA, although this is often not noticed and reported by the patient.11

Statistics from interviews in Oxfordshire with patients who had a TIA between 2002 and 2007 found that 70% of patients did not correctly recognise their TIA. This causes a delay in seeking medical help.

Up to a third of recurrent strokes occur before the patient seeks any medical attention.

Reliable estimations of this risk are necessary for educating the population and planning effective service provision and appropriate follow-up by specialist services.12

It has been quoted that the early risk of stroke after TIA varies widely between 3% and 11% at seven days; a significant difference, with the lowest risk being when emergency treatment has been given by specialised stroke services.11

Preventing recurrence
It has been estimated that a high number of recurrent events might be prevented with the use of a specialist centralised approach encompassing adjustments such as dietary and lifestyle modification (current smoking, alcohol consumption, psychological stress) with concurrent medical interventions.

This will include appropriate urgent investigations and control of risk factors, such as hypertension and high cholesterol.

Lifestyle advice should target as many risk factors as possible.

A 58-year-old man was brought to the emergency department by his family. During his routine morning walk he noticed a sudden onset of left facial numbness associated with a dull headache on the right posterior aspect of his head. He was staggering to the right side and feeling unsteady and nauseated, with no vomiting. He telephoned his wife, who noticed his speech was slow and slurred, but there was no word-finding difficulty. His family immediately took him to hospital.

There was a history of hypertension, hypercholesterolaemia, ischaemic heart disease (MI and PCI with bare metal stent in 2007) and probable TIA at the time of cardiac intervention. His medication included atenolol, ramipril, simvastatin, aspirin and clopidogrel.

When reviewed by emergency department staff (three hours after the onset of symptoms) the speech and balance had returned to normal. Examining his cardiovascular, respiratory and neurological systems revealed no abnormalities.

The history and examination was consistent with a TIA in the vertebro-basilar circulation. An ECG showed sinus bradycardia with no ischaemic changes. The chest X-ray and blood tests were all unremarkable and his random cholesterol result was 6mmol/L. His BP was slightly elevated at 160/80mmHg.

The patient's ABCD2 score was four. As this constitutes a moderate risk of stroke in the following 48 hours, he was admitted to the stroke unit. A diffusion-weighted brain MRI was performed (below), which showed an area of restricted diffusion in keeping with ischaemia in the inferior cerebellar artery (PICA) territory. There was also some suggestion that the right vertebral artery may be occluded and therefore an outpatient CT angiogram was organised, mainly to exclude vertebral artery dissection. 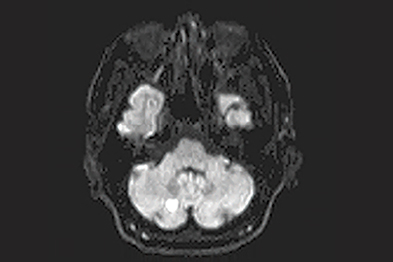 The diagnosis of a TIA was explained to the patient and he was discharged with appropriate secondary prevention to reduce the risk of stroke.

He was instructed not to drive for one month. 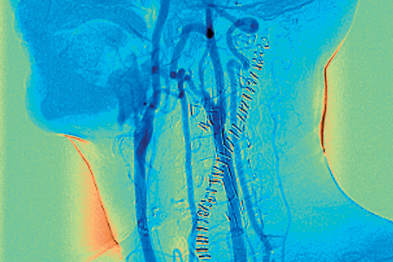 Clinical trials
There is substantial evidence from clinical trials and observational studies to suggest that stroke can be prevented.

2. Coull A, Lovett J, Rothwell P, on behalf of the Oxford Vascular Study. Population-based study of early risk of stroke after transient ischaemic attack or minor stroke: implications for public education and organisation of services. BMJ 2004; 328: 326-8.