Its clinical manifestations range from arthralgia, photosensitivity and the classic malar or 'butterfly' rash to internal organ involvement, most notably renal and CNS disease.

Prevalence
SLE typically affects young women of childbearing age, but all ages can be affected. The overall female:male ratio is 9:1. In paediatric populations and those aged >50, the ratio is 4:1.

The female predominance in SLE may indicate that hormonal influences play a part, but the precise role of estrogens is unclear.

The prevalence of SLE ranges from 40 to 200 per 100,000 population, varying considerably in different ancestral groups. It is more common in African, Asian and Hispanic populations than in those of European ancestry.2-4 Overall prevalence in the UK is approximately 28 per 100,000, rising to about 200 per 100,000 in African-Caribbean females.5 Patients from these ethnic groups are more likely to develop internal organ complications, such as lupus nephritis.6,7

There is a clear familial tendency in SLE, with a disease concordance of 24-57% in monozygotic twins and 2-5% in dizygotic twins, and a sibling risk ratio of 20-29, indicating that a genetic contribution is important.8,9

A wide variety of autoantibodies occur in SLE and their role in diagnosis is well established. Antinuclear antibodies (ANA) are the hallmark of SLE, while high-affinity antibodies to double-stranded DNA (anti-dsDNA) correlate with clinical activity, particularly renal disease.

The interplay between genetic, hormonal and environmental factors results in T-cell dysfunction and B-cell activation, autoantibody production and the clinicopathological manifestations of SLE.

No single clinical feature or laboratory test is diagnostic of SLE because no two patients present alike. Diagnosis requires a careful review of symptoms, detailed physical examination and appropriate investigations.

Classification
The 2012 Systemic Lupus International Collaborating Clinics classification requires the patient to fulfil four criteria, including at least one clinical and one immunological. Alternatively, the patient must have biopsy-proven lupus nephritis in the presence of ANA or anti-dsDNA.10

Although the criteria are useful for enrolling patients in research studies, they should not be used to diagnose patients because they are designed to be highly specific at the cost of sensitivity. There are no diagnostic criteria for SLE, so patients with mild or early SLE may not be diagnosed.

The more challenging situation is the patient who presents in primary care with a long history of malaise, fatigue, oral ulcers, arthralgia and non-specific skin rashes.

Clues to the diagnosis (see box 1) include the development of an asymmetrical pattern of Raynaud's phenomenon, recurrent oral ulcers, characteristic discoid skin lesions, scarring alopecia or photosensitivity and a symmetrical pattern of arthritis or arthralgia. Although the butterfly rash is characteristic, it is in fact an uncommon presentation. 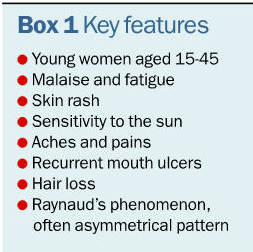 If in doubt, a careful history, supplemented by simple screening investigations, may lead to an appropriate early referral. Laboratory investigations that suggest an early presentation of SLE include finding a high ESR with a normal CRP, cytopenias and a positive ANA. Urinalysis for proteinuria is an important screening test.

Every effort should be made to taper the dosage to the lowest sufficient to maintain disease control, to minimise potential side-effects.

Hydroxychloroquine is extremely useful in the management of musculoskeletal and dermatological symptoms in SLE.

It has benefits in terms of reducing the risk of disease flares, increased long-term survival and protection against thrombosis and loss of bone mass.11 It also reduces damage accrual over time and has a protective effect on renal damage in patients with lupus nephritis.12,13

While hydroxychloroquine associated retinopathy is rare, it is recommended that patients have a baseline visual field examination. Thereafter, in low-risk patients, no further testing is required for the next five years. After five years of therapy, annual eye examination is recommended.

In high-risk patients, those with macular degeneration, retinal dystrophy or more than five years of therapy, annual eye examinations are recommended.14

The Euro-Lupus regimen of a fixed low dose of cyclophosphamide for a short period, followed by maintenance therapy with azathioprine or mycophenolate mofetil, is now widely used and achieves comparable results to the high-dose cyclophosphamide protocol, with a low rate of endstage renal failure at 10 years.15,16

Azathioprine
Azathioprine is frequently used in the management of moderate to severe SLE. Patients taking it also require regular FBC and liver function monitoring. Azathioprine can be continued during pregnancy.

Mycophenolate mofetil
Mycophenolate mofetil has become one of the most frequently used immunosuppressive agents in SLE. It is less likely than cyclophosphamide to cause toxicity, such as ovarian failure and infection. It is, however, contraindicated in pregnancy and patients should be switched to azathioprine during pregnancy planning.

Methotrexate
Methotrexate is useful in the treatment of SLE, particularly in those with predominantly musculoskeletal and cutaneous involvement. It is given once weekly in conjunction with folic acid. Regular monitoring of liver function and FBC is required.

Biological agents
Increased understanding of the immunopathogenesis of SLE has led to the introduction of new biologics.

Rituximab has been used in SLE for almost a decade and has led to dramatic improvement in some patients with refractory disease.

More recently, corticosteroid-sparing regimens in lupus nephritis have been introduced with some success, with rituximab as induction therapy followed by maintenance mycophenolate mofetil. A large RCT is currently running.19

B-cell survival factors, such as B-lymphocyte stimulator protein (BLyS), have also been used as a therapeutic target.

Belimumab, a fully humanised monoclonal antibody against BLyS, has been shown to be effective in SLE patients with musculoskeletal, mucocutaneous, haematological and general constitutional features and has been approved by the US Food and Drug Administration and the European Medicines Agency for use in non-renal SLE.20,21

Other biologics are in clinical trials, including those targeting costimulatory interactions between Tand B-lymphocytes and therapies that target cytokines, such as interleukin-6 and interferon-alpha.

Recent decades have seen major improvements, from a four-year overall survival rate of 50% in 1950 to a 15-year survival rate of 80% in the 1990s. Despite this, a patient diagnosed with SLE at 20 years of age still has a one in six chance of dying from disease activity or infection by the age of 35 years.

The bimodal pattern of mortality in SLE is well recognised, with early deaths due to active disease or infectious complications and deaths later in the course of disease due to cardiovascular disease (CVD).

There is a fivefold greater risk of atherosclerosis in SLE patients, with OR estimated at 4.8 to 9.8, making it critical to address classical risk factors such as smoking, obesity, hypertension, dyslipidaemia and diabetes mellitus in these patients.

The primary care physician has a major contribution to make in terms of assessing and managing these risk factors in patients with SLE.

As more targeted therapies are developed and patient survival increases, it is likely that CVD will become the primary cause of mortality in SLE, emphasising the need for cardiovascular risk modification early in the disease course.

Cardiovascular risk factors, including lipid and glucose levels, were normal. Anticardiolipin antibodies and lupus anticoagulant were negative and she had no previous thromboembolic events or miscarriages, so a coexisting diagnosis of antiphospholipid syndrome was excluded.

The patient remained stable for a year, but then presented with increasing malaise and ankle swelling. She was hypertensive and had pitting oedema of the ankles.

She was referred to her local hospital, where a renal biopsy revealed class III nephritis. Induction therapy was initiated, with six doses of IV cyclophosphamide over a 12-week period. An ACE inhibitor was also commenced for optimisation of proteinuria and hypertensive control.

These guidelines offer an overview of the principles of induction and maintenance immunosuppression in lupus nephritis.