1.5 CPD Credits Visit MIMS Learning for an updated version of this article

Clinical manifestations range from arthralgia, photosensitivity and the classic malar or 'butterfly' rash to internal organ involvement, most notably renal and CNS disease.

SLE is often considered to be a rare disease that may be difficult to diagnose. Although the latter is true in that the early presenting features of lupus may be variable and non-specific, SLE is actually fairly common, especially in certain ethnic groups.

The female predominance in SLE may indicate that hormonal influences play a part but the precise role of estrogens in modulating the immune system is unclear.

Furthermore, patients from these ethnic groups are more likely to develop internal organ complications, such as glomerulonephritis.

Aetiology
There is a clear familial tendency in SLE with a disease concordance of 24 to 57% in monozygotic twins, 2 to 5% in dizygotic twins and a sibling risk ratio of 20:29 indicating that a genetic contribution is important.3,4 An increasing number of lupus susceptibility genes have been identified including polymorphisms involved in antigen presentation, T and B-cell signalling, immune complex clearance and toll-like receptor pathways.

As a result of the complex interplay between these genetic, hormonal and environmental factors, T-cell dysfunction and B-cell activation ensues resulting in autoantibody production and the resultant clinicopathological manifestations of SLE.

Section 2: Making the diagnosis
No single clinical feature or laboratory test is diagnostic of SLE because no two lupus patients present alike and lupus is truly a heterogeneous disease.

Classification
The American College of Rheumatology (ACR) classification of SLE requires that a patient should have four of 11 criteria to be classified as having SLE.

These should not be relied on absolutely to make a diagnosis because these classification criteria were designed to be highly specific to enrol patients into clinical research but at the expense of sensitivity.

Diagnosis
Assessment of a lupus patient must take into account disease activity, cumulative organ damage and any potential drug toxicity caused by the patient's medication regimen, as well as quality of life.

A number of indices have been developed to measure SLE disease activity in secondary care and clinical research. The most commonly used indices are the British Isles Lupus Activity Assessment Group index (BILAG) and the Systemic Lupus Erythematosus Activity Index (SLEDAI). General quality-of-life measures can be used but lupus-specific instruments are increasingly being used in trials and clinical practice.6

Laboratory investigations at baseline and at regular follow-up should include FBC with differential WCC, ESR, CRP, serum creatinine, serum albumin and urinalysis. A baseline immunology screen in SLE patients should include ANA, anti-dsDNA, antibodies to extractable nuclear antigens, such as anti-Ro, anti-La, anti-ribonuclea-protein, anti-Sm, as well as anti-cardiolipin antibodies and lupus anticoagulant, and complement levels.

Organ involvement
The most common organs affected by SLE are the musculoskeletal and mucocutaneous systems with arthralgia/arthritis, oral ulceration, skin rashes and photosensitivity being the most common features at presentation. Renal disease is common and potentially serious if not diagnosed early.

If abnormalities are found on urinalysis, a further urine sample should be taken to look for dysmorphic red cells or casts and a formal urinary protein:creatinine ratio calculated.

Central and peripheral nervous system involvement is relatively common and the most common complaint is cognitive dysfunction. It is very common for patients to describe anxiety and depression, although whether these are manifestations of lupus or a reaction to having a chronic condition is often not clear. Major psychotic manifestations and seizures are less common.

Cardiopulmonary disease is well described and a detailed description is beyond the scope of this review. However, pleuritic chest pain and breathlessness are common symptoms. It is now clear that lupus patients are at increased risk of cardiovascular disease, especially stroke and MI.

These complications almost certainly arise as a result of vascular inflammation, dyslipidaemia and the effects of corticosteroids.

Section 3: Managing the condition
Corticosteroids are frequently used in the management of SLE. Mild disease may respond well to low-dose prednisolone 5-10mg daily. For more severe disease activity, higher doses of 20-40mg may be required or pulse therapy with IV methylprednisolone. While corticosteroids are effective in treating SLE, every effort should be made to taper the dosage to the lowest possible dose.

Antimalarial therapy
Hydroxychloroquine is extremely useful in the management of musculoskeletal and dermatological symptoms. As well as being disease modifying, hydroxychloroquine is beneficial in reducing disease flares and progression to organ involvement, reducing the risk of thrombosis and cardiovascular events, as well as having weak effects on improving lipid and glucose profiles.

While hydroxychloroquine-associated retinopathy is rare, it is recommended that patients have a baseline visual field examination.7 Thereafter, in low-risk patients, no further testing is required for the next five years, although it is good practice to ask the patient to have their visual fields checked annually.

Cyclophosphamide
Cyclophosphamide has been the mainstay of treatment in the secondary care of severe renal and CNS involvement in lupus since the National Institutes of Health trials in the US using high-dose therapy were published in the 1980s.

The Euro-Lupus Nephritis trial regimen of prescribing a fixed low dose of cyclophosphamide for a short period of time followed by maintenance therapy with either azathioprine or mycophenolate mofetil (MMF) is now widely used and achieves comparable results to the highdose cyclophosphamide protocol with a low rate of end-stage renal failure at 10 years.9,10

Azathioprine
Azathioprine is frequently used in the management of moderate to severe lupus. Patients taking azathioprine also require regular FBC and liver function monitoring. Azathioprine can be continued during pregnancy.

Mycophenolate mofetil
MMF is an inhibitor of purine synthesis and has become one of the most frequently used immunosuppressive agents in the management of SLE.

It is less likely than cyclo- phosphamide to cause toxicity, such as ovarian failure and infection. MMF is now widely used in the management of lupus nephritis and its efficacy has been shown in a number of clinical trials.11,12 MMF is, however, contraindicated in pregnancy.

Methotrexate
Methotrexate is useful in the treatment of lupus, particularly in those with predominantly musculoskeletal and cutaneous involvement. This medication is given once weekly in conjunction with folic acid. Regular monitoring of liver function and FBC is required.

Biological agents
An increased understanding of the immunopathogenesis of SLE in the past decade has led to the introduction of several new biological agents.

Rituximab, a chimeric monoclonal antibody, has been used in SLE for almost a decade with encouraging results. Rituximab has led to dramatic improvement in some patients with refractory lupus.

Belimumab, a monoclonal antibody against B-lymphocyte stimulator protein, has been approved by the Food and Drug Administration and the European Medicines Agency for use in non-renal lupus. A number of other biological agents are in trials, including abatacept, epratuzumab and atacicept.

Section 4: Prognosis
Major advances have been made in the management of SLE in recent years with increased recognition of the disease, earlier diagnosis and the development of novel therapies. Our understanding of the genetic basis of SLE is ever expanding and promises the possibility of personalised SLE therapy in the future.

Despite these advances, a patient diagnosed with lupus at 20 years of age still has a one in six chance of dying from disease activity or infection by 35 years.

The bimodal pattern of mortality in SLE is well recognised with early deaths due to active disease or infectious complications and deaths later in the course of disease due to cardiovascular disease (CVD). There is a fivefold increased risk of atherosclerosis in SLE patients with OR estimated at between 4.8 and 9.8.

This increased risk of CVD cannot be fully explained by the excess presence of traditional cardiovascular risk factors in these patients. Hence SLE patients have an inherent increased risk of developing atherosclerotic complications and it is therefore critical to address classical risk factors, such as smoking, obesity, hypertension, dyslipidaemia and diabetes mellitus, in these patients.

GPs have a major role in assessing and managing these traditional CVD risk factors in SLE patients.

As more targeted therapies are developed and patient survival increases, it is likely that CVD will become the primary cause of mortality in SLE, emphasising the need for cardiovascular risk modification early in the disease course.

Investigations revealed positive ANA, anti-dsDNA, anti-Ro and anti-Sm antibodies. Complement levels were mildly reduced. Laboratory tests also indicated haemolytic anaemia with haemoglobin of 9.5mg/dL. A diagnosis of SLE was made and treatment with hydroxychloroquine, low-dose prednisolone and azathioprine was commenced.

She was noted to have a maternal aunt with a history of lupus. Cardiovascular risk factors were checked, including lipid and glucose levels, and were normal. Anticardiolipin antibodies and lupus anticoagulant were negative and she had not experienced previous thromboembolic events or recurrent miscarriages and hence a coexisting diagnosis of antiphospholipid syndrome was excluded.

She remained stable for the following year but subsequently re-presented to her GP with increasing malaise and ankle swelling. On examination she was hypertensive and had pitting oedema of the ankles. Laboratory investigations revealed an elevated urea and creatinine, with an eGFR of 45 ml/min, hypoalbuminaemia, raised anti-dsDNA antibodies and reduced complement levels.

Urinalysis revealed proteinuria and red cell casts. A urine sample was further analysed for protein:creatinine ratio, which indicated an abnormal daily urinary protein loss of 6g, which is within the nephrotic range. 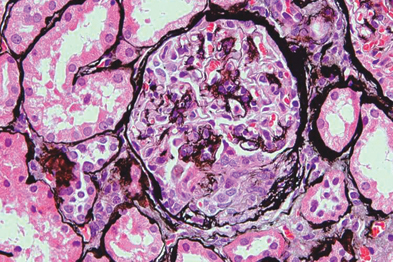 Biopsy
She was referred to hospital where a renal biopsy revealed class III nephritis (see image above). Induction therapy was initiated with six doses of IV low-dose cyclophosphamide over a 12-week period. An ACE inhibitor was also commenced for optimisation of proteinuria and hypertensive control.

The above clinical trials were pivotal in the development of our current treatment regimens for lupus nephritis.

The Euro-Lupus regimen of a low dose of cyclophosphamide for a short period of time followed by maintenance therapy with either azathioprine or MMF is now widely used. 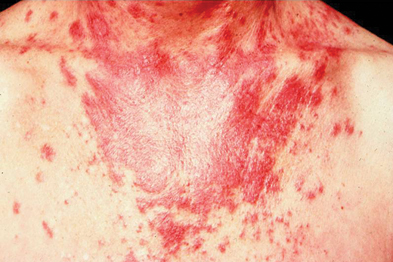 Visit MIMS Learning for an updated version of this article