Stroke is a common, serious and treatable condition. In the past 20 years, there have been major advances in the evidence base and more recently, there have been significant improvements in service delivery in some parts of the UK.

Stroke causes 11% of all deaths and every year, more women die of stroke than of breast cancer.

There are about 900,000 survivors living with stroke, about half of whom are disabled.

Stroke shares risk factors with cardiovascular disease. BP is the most important factor in terms of attributable risk, but smoking, obesity and hyperlipidaemia are also important. In older patients, AF remains a significant and undertreated risk factor.

The symptoms of TIA are similar to those of stroke, but by definition, resolve within 24 hours. In practice, patients whose symptoms last for more than an hour very rarely make a complete recovery.

Modern treatments are critically time-dependent, so it is inappropriate to wait before treating, even in patients who present with apparently mild symptoms.

A rule of thumb adopted by the Royal College of Physicians (RCP) is to treat as stroke patients all those whose symptoms have not completely resolved by the time they seek medical attention.

Recognising stroke is very difficult in the acute phase, but essential if patients are to access emergency treatment within the shortest possible time.

FAST (Face, Arms, Speech, Time) is useful as a first assessment test before arrival at the hospital. Approximately 80% of 'FAST positive' patients will have a confirmed diagnosis of stroke.2,3 Conditions that mimic stroke and can lead to a positive FAST test without being a stroke are seizures, sepsis, metabolic disorders, functional presentations and demyelinating conditions.4,5

The cardinal features of the clinical presentation of stroke/TIA are:

Less focal symptoms and signs include vertigo, amnesia, lightheadedness, loss of consciousness and confusion. These are more likely to be related to another condition, rather than stroke/TIA.5,6

TIA and stroke are different presentations of the same entity. However, patients who have a TIA also risk a stroke in the near future. In these cases, rapid diagnosis, starting treatment and addressing risk factors of stroke should be considered an emergency.

Patients with TIA can be divided into risk categories using the ABCD2 score (table 1). Those with a score of ≥4 would be high risk.7

However, patients with more than one episode within a week, or those in AF or on anticoagulation are high-risk TIA, regardless of their score.7,8 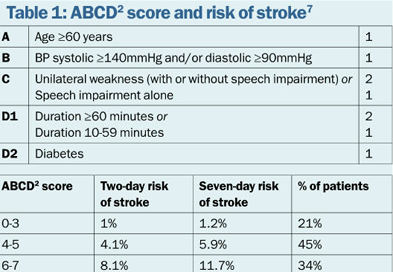 CT is the primary imaging modality. Haemorrhage is visible and modern CT scanning can confirm the diagnosis in about 80% of cases of infarction in patients scanned within six hours of onset.

MRI is much more sensitive and specific, but takes longer and can be difficult in acutely unwell patients. Availability of MRI in the emergency situation is limited at present.

Perfusion imaging, using CT or MRI, can be used to identify areas of reversible brain ischaemia as targets for treatment.

CT-MR angiography of the intracranial and extracranial vessels is increasingly useful to identify internal carotid artery stenosis and dissection, as well as intracranial arteriovenous malformations and aneurysms.

Doppler imaging of the internal carotid arteries is useful in screening for stenosis, and echocardiography and 24-hour ECG are used to identify cardiac sources of embolism.

Routine blood tests, including lipid profile, help with identification of treatable risk factors, as well as rare causes of stroke.8-10

The most cost-effective treatment for acute stroke is prompt admission to a stroke unit, a geographically defined unit with an expert multidisciplinary team.

Maintenance of normal physiology, prevention and early treatment of complications, such as nosocomial infection or neurological deterioration, and early mobilisation all contribute to the demonstrated reductions in mortality and disability. Stroke units reduce costs and save lives.11,12

Some patients with ischaemic stroke are candidates for thrombolysis with alteplase.

The most notable benefits are seen if treatment is possible much earlier. One in three patients treated within 90 minutes will make a full functional recovery, as will one in six of those treated within three hours.12,13

For most patients with ischaemic stroke, early treatment with aspirin is indicated. This prevents recurrence in ischaemic stroke and probably promotes vascular recanalisation. Routine use of low molecular weight heparin and stockings is not effective in preventing DVT in stroke, although intermittent pneumatic compression is.14,15

About 40% of stroke survivors are considered suitable for early supported discharge (ESD).

For this group, ESD is associated with better functional outcome, lower hospital readmission rates and increased patient satisfaction compared with the alternative of inpatient rehabilitation.

Patients diagnosed with stroke and TIA should be advised not to drive for one month. Disabled survivors at one month should inform the Driver and Vehicle Licensing Agency and may require assessment before being allowed to drive.

Approximately 30% of patients will have a recurrent stroke within five years. Risks can be substantially reduced by lifestyle modification and medical treatment.

Antithrombotic treatment with clopidogrel 75mg once daily is the first-line treatment for patients with ischaemic stroke in sinus rhythm. Lipid lowering with statins should be initiated unless contraindicated.8,16

AF is associated with a high risk of recurrent stroke. In almost all stroke survivors with AF, the risk of stroke without anticoagulation is higher than the risk of significant bleeding on anticoagulant therapy.

For example, the risk of intracranial haemorrhage resulting from falls while taking anticoagulants is more than 100 times lower than the stroke risk in untreated AF.

The bleeding risk of antiplatelet therapy is similar.

Alice, a 68-year-old retired GP who enjoys swimming, jogging and golf, presented with left-sided paralysis of the arm and leg, slurred speech and inability to walk. She had been diagnosed with hypertension in the past, for which she was on medication.

When she arrived at the hospital, Alice's symptoms had been present for eight hours. A CT brain scan showed ischaemic changes on the right hemisphere. She was admitted to the stroke unit and started aspirin therapy immediately.

Within 24 hours, Alice was assessed by the physiotherapist, occupational therapist and speech and language therapist. Initially, she needed assistance with most activities of daily living. She was discharged on the fifth day for rehabilitation at home. At six-week review, she was taking clopidogrel, simvastatin and her antihypertensives. She was also back to playing golf.

CLOTS has shown the benefit of intermittent pneumatic compression, with an absolute risk reduction of proximal DVT of 3.6%.

A high-trust approach to regulating GPs has paid dividends during the COVID-19 pandemic,...

How our practice is supporting staff wellbeing during the pandemic

Dr Vasu Siva explains the steps her practice has taken to support staff to look after...

GPs to contact all children on shielding lists this summer

GP practices will be asked to contact thousands of children on shielding lists over...

Fitness to practise cases paused during the coronavirus pandemic will restart this...