Section 1: Epidemiology and aetiology
Tuberculosis (TB) refers to the disease which may develop after infection with the bacillus Mycobacterium tuberculosis, and rarely, by Mycobacterium bovis. Although it most often causes lung disease, TB can affect any part of the body.

When an individual with untreated active pulmonary TB coughs, the organisms are expectorated in aerosol and may be inhaled by others. The inhaled organisms may be cleared from the lungs by mucociliary defences before the exposed person becomes infected.

Failing that, the host develops active infection or else cellular immune defences may limit and confine the mycobacteria, thereby preventing disease.Such individuals with so-called 'latent TB' run a 10 per cent lifetime risk of the quiescent infection progressing to disease.

If, at the time of initial infection, the defence systems fail to control the infection, it progresses to disease but patients may not present with symptoms for several months.

Risk
Those most at risk of TB are persons who are in regular or prolonged close contact (sharing bathrooms or kitchens) with an index patient, especially if the organisms are numerous enough to be detected by microscopy in the sputum (smear-positive).

TB is caught by inhalation, not by touch. Some 10 per cent of close contacts of a smear-positive patient will develop disease, young children and the immunocompromised being at greatest risk. With smear-negative disease, the figure is around 1%.

BCG vaccination in childhood is still useful in preventing TB in high-risk populations and in the UK is offered to such groups and those in 'at risk' occupations. 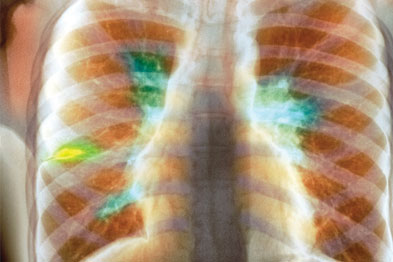 Lymphadenopathy on chest X-ray (blue) may be the only sign of TB (Photograph: SPL)

Epidemiology
The WHO estimates that globally around two billion people are infected with the M tuberculosis bacillus, of whom some nine million develop TB annually and almost two million die from the disease.

Mainly fuelled by the HIV epidemic, most TB occurs in the developing nations of Africa, the Indian sub-continent, China and south-east Asia, Russia and the Baltic states.1

In the UK it is very much a disease of the large cities, especially London, in areas where large immigrant populations from high prevalence nations are concentrated, often in poor, overcrowded housing conditions. Drug abusers, street dwellers and HIV-positive people are other at-risk groups.

Section 2: Making the diagnosis
It is important that doctors are aware that TB incidence is on the increase in the UK and they should have a raised index of suspicion when suggestive symptoms are present, especially in those from high-risk populations.

Cough, phlegm, weight loss, malaise, fever, night sweats and haemoptysis are all symptoms that should alert doctors to the possibility of TB, especially if they persist after treatment with a course of broad- spectrum antibiotics.

A personal or family history of TB, recent contact with a patient with TB, a trip to a high-prevalence country or immunocompromise should heighten suspicion further. Children with TB may cough but often present in a non-specific manner with loss of weight and energy and failure to thrive, perhaps with persistent fever.

Investigations
The patient should be sent for a chest radiograph and at least two specimens of sputum should be sent for direct-smear and culture for TB. With modern, liquid media methods of culture, a positive result may be obtained within two to three weeks. Suggestive radiological changes include fluffy, usually upper zone shadowing, with or without cavitation.

Mediastinal, paratracheal and/or hilar lymphadenopathy may be the only sign, especially in patients from the Indian sub-continent or Africa. Miliary shadowing can be seen in patients with disseminated TB. CT scanning is rarely indicated.

A tuberculin test may be helpful but needs to be interpreted in the light of BCG vaccination status, as a previous BCG will usually result in a positive test. Whatever the BCG status, a strongly positive tuberculin test (>15mm induration) supports the diagnosis of TB. A negative (less than 5mm induration or low-grade positive 5-10mm makes it less likely provided there is no immunocompromise.

Interferon gamma blood tests are now available: they are more specific in confirming M tuberculosis infection than the tuberculin test but as yet, their role in diagnosis of active disease is not established.

Normochromic, normocytic anaemia and raised ESR are not unusual but are non-specific. Molecular tests that can identify M tuberculosis are used when rapid microbiological identification is needed.

Extrapulmonary TB
Although pulmonary TB accounts for the majority of TB cases in the UK (54 per cent in 2009), M tuberculosis can infect any part of the body.2

Infection elsewhere is the result of haematogenous spread from the initial site of infection, most commonly the lungs. Symptoms and signs depend on the site of infection (see table). Extrapulmonary TB is seen more in patients from Africa and the Indian sub-continent. Cross-infection is rare.

Section 3: Managing the condition
Once the diagnosis is suspected or has been made, the patient should be referred to the local TB team. It is important that treatment with the standard anti-TB regimen of rifampicin and isoniazid for six months, supplemented by ethambutol and pyrazinamide for the initial two months, is started promptly.

If there is likely to be more than two or three days' delay before the clinic appointment, treatment should be started in primary care. Pyridoxine is often added in patients with underlying conditions that place them at increased risk of peripheral neuropathy.

A diet adequate to restore body weight and treatment for comorbid conditions are also important. The disease should be explained to the patient, myths dispelled and the certainty of cure (provided treatment is taken as prescribed) emphasised. A good doctor-patient relationship is crucial.

Admission to hospital is rarely necessary, and is more likely to be for another medical or social problem, rather than the TB. If there is any likelihood of poor compliance, directly observed therapy should be considered. The patient should be notified to the local director of public health.

Contact tracing
The TB team will organise and conduct an appropriate contact-tracing exercise (usually involving BCG history, tuberculin testing and chest X-ray). This will concentrate initially on close contacts and be extended to casual contacts if the patient is found to be particularly infectious. Identification and proper management of infected contacts is important in limiting further spread of the disease.

Cross-infection, if it is to occur, usually happens before treatment is started. Within two weeks of starting treatment, patients can be considered non-infectious. For those two weeks patients should be asked to avoid contact with young children and people to whom they have not been exposed before treatment started, but need not be admitted to hospital.

Follow up and side-effects
The TB team, in liaison with the GP, should review the patient regularly, being alert to drug side-effects and to confirm improvement of symptoms, weight, sputum and radiological status. Such investigations are usually performed two and six months after starting treatment.

Drug resistance, found in less than 10 per cent of patients, is more common in immigrant populations. If either isoniazid or rifampicin are to be omitted because of resistance or intolerance, the duration of chemotherapy should be increased to 12 or 18 months respectively, on at least two drugs to which the organism is sensitive.

Multidrug-resistant TB (MDR-TB) is TB that is resistant to both rifampicin and isoniazid and accounted for only 1% of UK TB cases in 2009. Suspected or confirmed cases should be managed by a specialist as 18 months or more treatment will be necessary, with five or more second-line drugs.

MDR-TB is an indication for admission to a negative pressure room in hospital. Extremely resistant TB (XDR-TB) is also resistant to two of the most potent second-line drugs (one of the quinolones and one of the injectable drugs - kanamycin, capreomycin, amikacin) and is rare in the UK.2

Section 4: Prognosis
In the UK, fewer than 5% of patients will die from TB and usually such patients will have presented late or diagnosis is only made after death.2

With prompt treatment the lesions in the lungs will heal well and leave only minimal scarring, insufficient to compromise lung function or life expectancy. In a few patients scarring and/or residual cavities result in areas of bronchiectasis.

In those treated adequately, symptoms resolve in weeks, the sputum becomes negative on culture within two to three months and the chest X-ray improves.

Section 5: Case study
A 32-year-old man presented with six weeks' history of cough and purulent sputum and feeling generally unwell. He complained of malaise, weight loss and some night sweats. He had moved to the UK from India two years previously. Neither a smoker nor a drinker, he lived with his wife and daughter who were well. He shared an office with two colleagues.

On examination he was thin, there was no lymphadenopathy nor hepatosplenomegaly and no stigmata of immunosuppression. Inspiratory crepitations were heard in the right upper zone anteriorly.

Chest X-ray showed widespread, ill-defined, nodular shadowing, a thick-walled cavity in the right upper zone with smaller cavities in both mid and upper zones and associated fluffy shadowing (see image above). Sputum was sent to the microbiology laboratory for microscopy and culture and was positive for acid-fast bacilli (AFB) on direct smear.

Diagnosis
A diagnosis of pulmonary TB was made. Standard anti-TB therapy was commenced with the patient being told about possible side-effects. With his consent, arrangements were made to examine his contacts, his family and office colleagues.

After two weeks of treatment he felt somewhat better but complained of nausea after taking his tablets in the morning.

He was asked to continue the combined preparation of rifampicin and isoniazid in the morning but to delay taking his ethambutol and pyrazinamide to lunch-time. The nausea settled and he resumed work.

Rifampicin and isoniazid were stopped at six months as planned and he was discharged from the chest clinic. 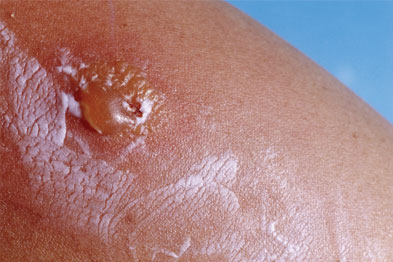 A tuberculin test may be helpful (Photograph: SPL)

Section 6: Evidence base
Clinical trials
The first randomised trial in medicine was of streptomycin in TB.3 This heralded a series of randomised trials in Europe, North America, Africa, India and Hong Kong which tested drugs, regimens and durations. Initially 18 months to two years,4 duration was reduced to nine months5 and eventually to six months with regimens based on rifampicin and isoniazid.6

Curriculum
This topic is covered in the GP curriculum in statement 15.8 Respiratory Problems.

2. Tuberculosis in the UK: Annual report on tuberculosis surveillance in the UK, 2010. London: Health Protection Agency Centre for Infections, November 2010.

6. British Thoracic Society. A controlled trial of 6 months' chemotherapy in pulmonary tuberculosis. Final report: results during the 36 months after the end of chemotherapy and beyond. Br J Dis Chest 1984; 78: 330-6.