A clinical review of the dianosis and management of prostatitis.

Section 1: Epidemiology and aetiology
The prostate gland is about the size of a walnut and sits below the bladder surrounding the urethra. It is a fibromuscular exocrine gland that secretes a complex proteolytic fluid which constitutes one third of the volume of the seminal fluid.

Prostatitis refers to a group of disorders which affect the prostate and cause pain, lower urinary tract symptoms (LUTS) and other related symptoms. The worldwide prevalence of prostatitis is around 2-10 per cent, and 15 per cent of men experience prostatitis-like symptoms at some point in their lives.1

The National Institutes of Health has revised this classification into four categories.

Category I is acute bacterial prostatitis. It is an acute prostatic infection caused by the same uropathogens that cause UTIs, such as Escherichia coli, klebsiella and proteus.

It can result either from ascending infection or a reflux of infected urine into the prostatic ducts.

Category II is called chronic bacterial prostatitis and is associated with recurrent episodes of UTIs caused by persistence of the pathogen in the prostatic ducts. Together category I and II constitute 5-10 per cent of all cases of prostatitis.

It is defined as genitourinary pain and LUTS present for at least three months over the last six months, in the absence of documented UTI with a urinary tract pathogen.

It is further subclassified into inflammatory and non-inflammatory categories depending on the presence or absence of pus cells in the semen.

It can be differentiated from chronic bacterial prostatitis by the absence of documented UTI.

The aetiology of category III is not well understood. Interaction between psychological factors and dysfunction of endocrine, immune and neurological systems has been postulated. The resulting inflammatory reaction will lead to pelvic pain and related symptoms.

Category IV is asymptomatic inflammatory prostatitis. The clinical significance of category IV prostatitis is unknown and often no treatment is necessary.

Section 2: Making the diagnosis
Symptoms of prostatitis may vary depending on the category involved. Therefore history, physical examination and urine analysis is considered mandatory in all patients presenting with prostatitis-like symptoms.

Acute bacterial prostatitis often presents with systemic symptoms of fever, chills and hypotension. Local symptoms include pelvic pain, dysuria and LUTS. Typically, the prostate gland is tender, firm and swollen. Diagnosis is based on clinical features. Patients often have a history of prostate biopsy.

Investigations
Urine culture and sensitivity is often positive for the causative micro-organism. Further investigations include blood culture and CT scan or transrectal ultrasound scan (TRUS) to exclude prostatic abscess. Chronic bacterial prostatitis is characterised by recurrent bacterial infection of the prostate with the same pathogen combined with pelvic pain, LUTS, erectile dysfunction (ED) and low-grade fever. Many patients are asymptomatic between episodes.

Currently, a two-glass test is used instead (VB2 +VB3). It is easier and has the same sensitivity as the four-glass test.

CP/CPPS
Category III is the most common form of prostatitis. Symptoms are usually present for at least three months over the last six months.

Category III is characterised by pain in the perineum, lower back, abdomen or test is associated with LUTS, ED, ejaculatory pain and pelvic muscle spasm. Symptoms tend to be intermittent and recurrent.

CP/CPPS is poorly defined and there is no diagnostic test available yet. The Chronic Prostatitis Collaborative Research Network (CPCRN) has established a reliable and validated outcome measure for patients with chronic prostatitis called the National Institutes of Health chronic prostatitis symptom index (NIH-CPSI).3

It is a useful tool in the initial evaluation patients and for monitoring of patients with CP/CPPS over time.

Category IV prostatitis is often diagnosed incidentally on prostate biopsy. It is asymptomatic and is often left untreated.

Section 3: Managing the condition
Once the patient has been diagnosed with prostatitis, the category should be determined to facilitate treatment (see flow chart). 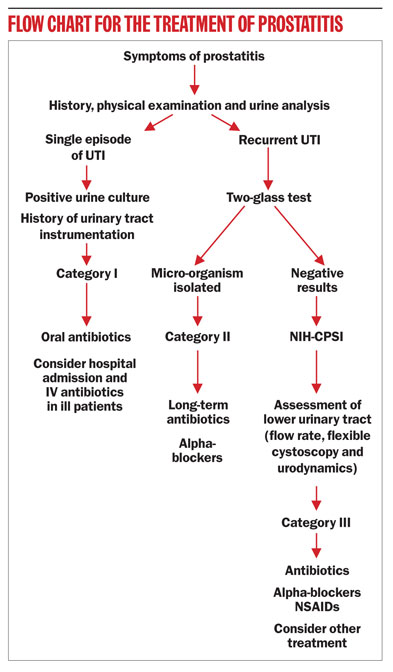 Antibiotics can be modified once the culture and sensitivity results are available.

Antibiotics that cross the blood-prostate barrier are the preferred first-line treatment, such as fluoroquinolones and trimethoprim (for 28 days).

Men at higher risk for STIs may benefit from doxycycline. Patients with systemic signs of infection or sepsis should be admitted to hospital to receive IV broad-spectrum antibiotics, such as cephalosporins and aminoglycosides.

Supportive measures, such as antipyretics, analgesics, hydration and laxatives, may also be needed. The insertion of a urethral catheter is mandatory to avoid urinary retention.

Long-term antibiotics may be required to prevent recurrent infections. Alpha-blockers may provide some symptomatic relief.

Treatment for CP/CPPS
Treatment of CP/CPPS is challenging as the aetiology is poorly understood. Current therapy is centred on symptomatic relief and consists of antibiotics, alpha-blockers and anti-inflammatory drugs.

Nevertheless, there is limited evidence to support any particular treatment. The NIH-CPSI questionnaire should be completed at initial consultation and at subsequent visits.

The nature of the condition and controversy in aetiology and management should be explained to the patient. Some men may also benefit from chronic pain psychological counselling.4

The first therapeutic measure is often a four to six-week course of a fluoroquinolone or trimethoprim, alpha-blockers for urinary symptoms and anti-inflammatory drugs for pain relief.

Approximately 50 per cent of men with CP/CPPS improve on antibiotic treatment.

However, a positive response has only been observed in men with short-term symptoms and not previously treated with antibiotics.5

A recent randomised trial comparing levofloxacin, tamsulosin and combination therapy for the treatment of CP/CPPS demonstrated significant improvement in the NIH-CPSI total score in the combined treatment group.7

It seems 5-alpha-reductase inhibitors may have a role in the treatment of CP/CPPS, however there are no well-designed randomised trials to confirm its efficacy.

Phytotherapy, such as natural bioflavonoids, have been shown to provide symptomatic relief. Anxiolytics and antidepressants have also been used in the treatment of CP/CPPS.

Minimally invasive surgical intervention, such as transurethral microwave treatment and transurethral needle ablation, have shown some benefit in small case series studies.8 However, they are still considered an experimental treatment option and further randomised trials are required to confirm their beneficial effect.

Category IV prostatitis is asymptomatic and antibiotic treatment can be considered for patients with raised PSA.

Section 4: Prognosis
Acute bacterial prostatitis can be treated with a short course of IV antibiotics.

Failure to respond to treatment may suggest the development of a prostatic abscess. TRUS, CT scan or MRI is diagnostic. A prostatic abscess can be drained percutaneously, transrectally or transurethrally.

CP/CPPS is a challenging condition for the patient and the healthcare practitioner.

It can be very difficult to treat as the aetiology is not well understood.

Despite the availability of various treatment options, the prognosis for these patients remains poor. Treatment is based on symptomatic relief, however symptoms tend to be difficult to control.

Men who have already been treated with different therapies show poor response to combination therapy of an alpha-blocker and antibiotic.

Psychological state has been shown to impact on the quality of life of men suffering from CP/CPPS.

Those men should be informed about their clinical condition, including the diagnostic steps and the possible therapies. It is important for patients to be aware of the uncertainty of the available treatment protocol and that several treatment attempts may be necessary before reaching acceptable results.

Psychotherapy and antidepressants may be necessary to improve the quality of life in this group of patients.

Conclusion
Prostatitis represents a wide range of clinical conditions. It is common and can cause significant comorbidity.

Bacterial prostatitis represents a small percentage of the syndrome and has an excellent prognosis.

On the contrary, chronic non-bacterial prostatitis affects the majority of patients and is difficult to treat.

Further research in the pathophysiology of the disease will improve our understanding and will have a great impact on the prognosis.

Section 5: Case study
A 40-year-old man presents with a 12-month history of dull ache in the testicles, perineum and a burning sensation along his urethra. Pain is moderate and relieved on ejaculation.

He also suffers from significant LUTS, including frequency, dysuria, nocturia and poor flow. His past medical history includes high BP and he is on antihypertensive medication.

There is a history of a significant level of work-related stress and he correlates his symptoms to his stress level.

Examination
The patient was apyrexial with normal BP and pulse rate. His abdomen was soft and non-tender with no palpable masses.

Examination of the external genetalia revealed mild tenderness in the left testis with no mass detected. Digital rectal examination (DRE) revealed a moderately enlarged tender prostate. His preand post-DRE urine microscopy and culture revealed less than 10 white cells per high-power field and no pathogens were identified. All the other haematological parameters were normal. The patient was managed initially with oral ciprofloxacin 500mg twice a day for four weeks and tamsulosin 400 micrograms once a day for three months.

Follow up
The patient was reviewed in the clinic four months later and he reported mild improvement in his symptoms. He was given advice on lifestyle changes.

Reducing the level of stress and considering psychotherapy was recommended. The patient was advised to reduce the intake of caffeinated drinks and spicy food.

NSAIDs were recommended for a short period to deal with the flare-up of symptoms. The patient was kept under routine follow-up and NIH-CPSI was used to monitor his improvement.

This was a randomised, multi-centre, double-blind non-inferiority study.

This multicentre, randomised, double-blind and placebo-controlled trial was conducted at 10 sites in the United States and one site each in Canada and Malaysia.

Main outcome: the efficacy of alfuzosin, an alpha-adrenergic receptor blocker, in reducing symptoms in men with CP/CPPS was evaluated.

There was no statistical significant difference in the NIH-CPSI score between alfuzosin and placebo. The limitations of this study include testing a single alpha-blocker, that treatment was limited to 12 weeks and that all study groups received prior treatment with an alpha-blocker.

Guidelines on the management of urinary and male genital tract infections (2008.) United Kingdom National guideline for the management of prostatitis (2008), British Association of Sexual Health and HIV (BASHH).

The official website of BASHH. It provides clear guidelines on the management of prostatitis syndrome.

The National Kidney and Urologic Diseases Information Clearinghouse website (NKUDIC), a service of the National Institute of Diabetes and Digestive and Kidney Diseases (NIDDK, NIH). This page includes information on the types of prostatitis, the diagnosis and treatment.

Click here for an archive of all GP clinical reviews